Electric lighting burns up to 25% o the average home energy budget. The electricity used over the lifetime of a single incandescent bulb costs 5 to 10 times the original purchase price of the bulb itself.

The electricity used over the lifetime of a single incandescent bulb costs 5 to 10 times the original purchase price of the bulb itself.

CFLs are simply miniature versions of full-sized fluorescents. They screw into standard lamp sockets, and give off light that looks similar to the common incandescent bulbs – not like the fluorescent lighting we associate with factories and schools.

LEDs are small, very efficient solid bulbs, New LED bulbs are grouped in cluster with diffuser lenses which have broadened the applications for LED use in the home. LED technology is advancing rapidly, with many new bulb styles available. Initially more expensive than CFLs, LEDs bring more values since they last longer. Also, the price of LED bulbs is going down each year as the manufacturing technology continues to improve.

LED (Light Emitting Diodes) are solid light bulbs which are extremely energy-efficient. When first developed, LEDs were limited to single-bulb use in applications such as instrument panels, electronics, pen light and, more recently, strings of indoor and outdoor Chrismas lights.

Long lasting – LED Bulbs last up to 10 times as long as compact fluorescents, and far longer than typical incndescents.

Durable – since LEDs do not have a filament, they are not damaged under circumstances when a regular incandescent bulb would be broken. Because they are solid, LED bulbs hold up well to jarring bumping.

Mercury free – no mercury is used in the manufacturing of LEDs.

More efficient – LED light bulbs use only 2-17 watts o electricity (1/3rd to 1/30th of Incandescent or CFL). LED bulbs used in fixtures inside the home save electricity remain cool and save money on replacement costs since LED bulbs last so long. Small LED flashlight bulbs will extend battery life 10 to 15 times longer than with incandescent bulbs.

Cost-effective – although LEDs are initially expansive, the cost is recouped over time and in battery savings. LED bulbs use was first adopted commercially, where maintains and replacement costs are expensive.

Light for remoter area and portable generator – because of the low power requirement for LEDs, using solar panels becomes more practical and less expensive than running an electric line or using a generator or lighting in remote or of-grid areas. 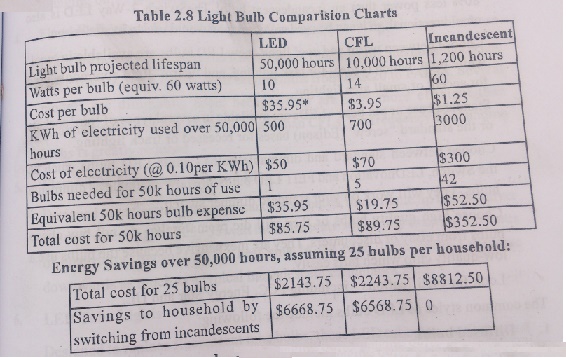 Did you know watts don’t tell you how bright a light will be?

To compare different light bulbs, you need to know about Lumens. Lumens, not watts, tell you how bright a light bulb is, no matter the type of bulb. The more lumens, the brighter the light. Beginning in 2012, labels on the front of  light bulb packages now state a bulb’s brightness in lumens, instead of the bulb’s energy usage in watts.

While lumens is the best measurement of comparative lighting among the various bulbs, it is not always a perfect measure. Some floodlights in can lighting use an internal reflector in the bulb to send the light facing download. When shopping for light bulbs, note that bulbs equipped with reflectors will deliver increased directional light.

The chart below shows the amount of brightness in lumens you can expert from different wattage light bulbs. The LED bulbs require much less wattage than the CFL or Incandescent light bulbs, which is why LED bulbs are more energy-efficient and long lasting than the other types of bulbs.

Less Expensive – Although initially more expensive, you save money in the long run because CFLs use 1/3 the electricity and last up to 10 times as long as incandescent. A single 18 watt CFL used in place of a 75 watt incandescent will save about 570 kWh over its lifetime. At 8 cents per K Wh, that equates to a $45 savings.

Reduce Air and Water Pollution – Replacing a single incandescent bulb with a CFL will keep a half-ton of CO2 out of the atmosphere over the life of the bulb.