There are two types of Flame Photometers that are used invariably in Flame Emission Spectroscopy (FES), namely :

(a) Simple Flame Photometer, and

These two typical instruments shall be discussed briefly here highlighting their various components and procedural details.

The line-sketch of a simple flame photometer is shown in Figure 25.2.

In general, Flame Photometers are designed and intended mainly for carrying out the assay of elements like : Sodium, Potassium, Calcium, and Lithium that possess the ability to give out an easily excited flame spectrum having sufficient intensity for rapid detection by a photocell.

The compressed and filtered air (A) is first introduced into a Nebulizer (E) which creates a negative pressure (suction) enabling the liquid sample (C) to gain entry into the atomizer (E). Thus, it mixes with the stream of air as a fine droplet (mist) which goes into the burner (G). The fuel gas (D) intro-duced into the mixing chambers (F) at a given pressure gets in touch with the air and the mixture is ignited. Consequently, the radiation from the resulting flame (H) is made to pass through a convex lens (I) and ultimately through an optical filter (J) that allows specifically the radiation characteristic of the element under examination to pass through the photocell (K). Finally, the output from the photocell is adequately amplified (L) and subsequently measured on an appropriate sensitive digital-read-out device. 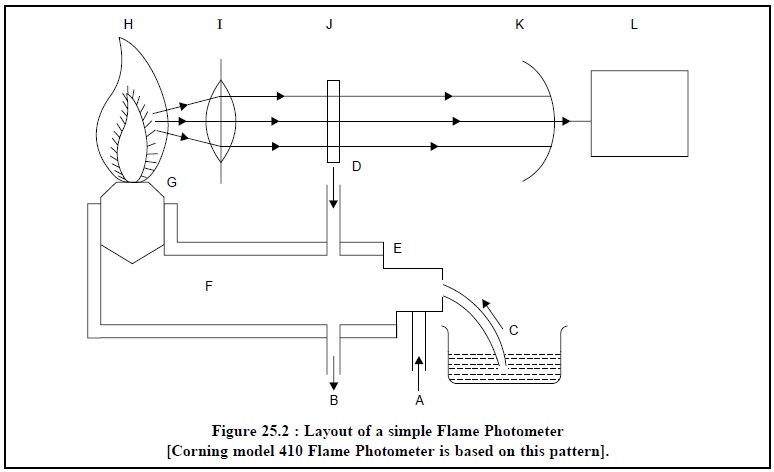 A = Inlet for compressed Air,

B = Drain outlet (to maintain constant pressure head in the mixing Chamber),

K = Optical filter to transmit only a strong-line of the element, and

The layout of an internal standard flame photometer is illustrated in Figure 25.3. 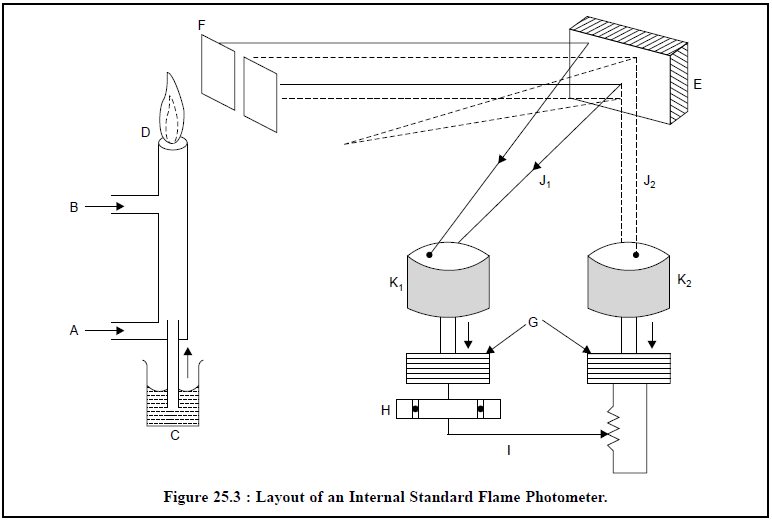 A = Inlet for compressed air,

B = Inlet for Acetylene (Fuel-Gas),

C = Liquid sample sucked in by an atomizer,

F = An optical filter to allow the transmission of only one strong-line of the element, G

H = A Null detector to record the intensity of the element under study and the internal-stand-ard (Lithium),

I = A calibrated potentiometer,

J2 = Lines due to the Internal Standard ‘Lithium’, and

The use of an internal standard flame photometer not only eliminates the visible effects of momentary fluctuations in the flame characteristics produced by variations in either the oxidant or under full pressures, but also the errors caused due to differences in surface tension and in viscosity are minimised to a great extent.

In this particular instance ‘Lithium’ is employed as an internal standard and an equal concentration is added simultaneously to the sample and the standard solutions. The sample (C) solution having the internal standard (Lithium) is sucked in by an atomizer and a fine spray is thereby introduced into the flame (D). The radiation thus emitted is subsequently passed through a filter (F) and then collected by a mirror (E). The emitted radiation reflected from the mirror is split up into two parts : the first part is caused due to the internal standard (Lithium), whereas the second part arises due to the element under examination. Both these lines J1 and J2 are passed through the respective photocells K1 and K2 whereby the light energy is transformed into the electrical impulses. These electrical impulses are usually very weak and feeble and hence, they are duly amplified by a suitable amplifier (G) individually and are subsequently introduced into the common detecting device (H) i.e., a ‘Null detector’-so as to enable it to record the intensity of the element under investigation and also the internal standard (Lithium) accurately using a calibrated potentiometer (I).

In short, an internal-standard flame photometer provides a direct and simultaneous result with respect to the ratio of intensities.