Within the cerebellum the Purkinje cell axons are the only ones that enter the white matter from the cortex. 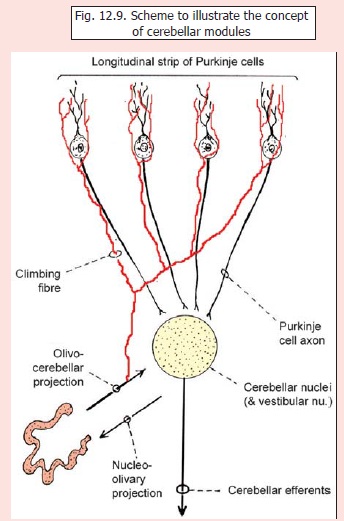 We have seen that parallel fibres (carrying impulses from mossy fibres relayed by granule cells) synapse with dendrites of basket cells, stellate cells and Golgi cells. The axons of stellate and basket cells end in direct relation to Purkinje cells. They are inhibitory to the Purkinje cells. The axons of Golgi cells (terminating in relation to glomeruli) are believed to exert an inhibiting influence on the synapses between mossy fibres and granule cell dendrites.

Purkinje cell activity occurs as a result of all these influences. We have seen that Purkinje cells project to cerebellar nuclei. Physiological evidence suggests that this influence is inhibitory to these nuclei. Excitatory influences probably reach these nuclei through collaterals from various cerebellar afferents.

Recently it has been proposed that the cerebellum is divisible into a large number of discrete ‘modules’ each consisting of a group of Purkinje cells, their axons, and groups of cells in cerebellar nuclei in which they end (Fig. 12.9). Climbing fibres are also included in this modular concept which has been described as ‘modular organisation of cerebellar output’.

Functional localisation in the cerebellum

In the cerebellar cortex it is possible to localise areas that receive afferents from different parts of the body. There is a double representation on the superior and inferior surfaces of the cerebellum. Representation on the superior surface is ipsilateral; and that on the inferior surface is bilateral. On either surface the anteroposterior sequence of parts represented is leg, trunk, arm and head. These area are located in vermal and paravermal areas (paleocerebellum) and correspond to areas that receive fibres from the spinal cord. Stimulation of these areas produces movements in parts of the body that correspond roughly to those from which sensory impulses are received.

In addition to proprioceptive impulses the cerebellum receives visual impulses which reach the folium and tuber. A second visual area is located in the biventral lobule and tonsil. These visual areas also receive auditory impulses. Vestibular impulses are received mainly by the nodule and flocculus.

The regions of cerebellar cortex from which efferent projections pass to the cerebellar nuclei are arranged in a medio-lateral sequence corresponding to the position of the nuclei. The fastigial nucleus receives fibres from the vermis, the globose and emboliform nuclei from paravermal regions, and the dentate nucleus from the lateral region. Further details are given.

The vestibular nuclei receive direct projections from the cerebellar cortex (Fig. 12.10). They are, therefore, regarded as displaced cerebellar nuclei. 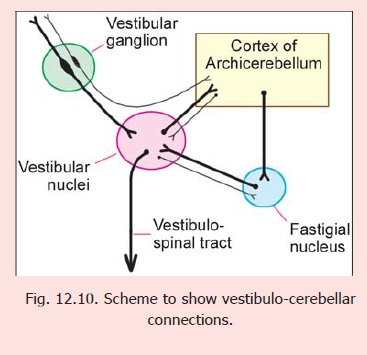 At the outset it is necessary to emphasise that, as far as cerebellar connections are concerned, the lateral vestibular nucleus (Dieter’s nucleus) is distinct from other vestibular nuclei.

Connections of vestibular nuclei (other than lateral)

2.              The vestibulo-cerebellum projects to vestibular nuclei either directly, or after relay in the fastigial nucleus.

Through the connections described above the vestibulo-cerebellum (specially the flocculus) plays an important role in control of eye movements, particularly during movements of the head, and when the eyes are following a moving object (pursuit movements). [In this connection it is important to remember that visual information, and information about eye movements reach the flocculus through the reticular formation].

Connections of the lateral vestibular nucleus with the cerebellum

The lateral vestibular nucleus (of Dieter) does not receive fibres from the labyrinth, nor is it connected to the fastigial nucleus.

The cerebellar cortex is able to influence muscles of the trunk and limbs through the lateral vestibular nucleus.

The inferior olivary complex (made up of the main and accessory olivary nuclei) sends numerous fibres to the opposite half of the cerebellum (Fig. 12.11). Various parts of this complex exhibit a point to point relationship with the cerebellar hemisphere. The accessory olivary nuclei (lying most medially) project to the vermis and intermediate regions (zones A, B, C); while medial, intermediate and lateral parts of the (main) inferior olivary nucleus project to corresponding regions of the hemispheres (zone D). 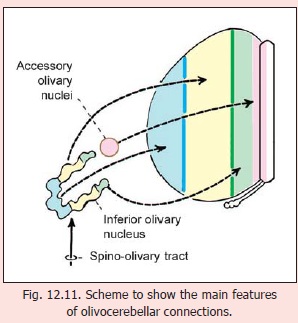 Olivocerebellar fibres end within the cerebellar cortex as climbing fibres. Collaterals from these fibres terminate in cerebellar nuclei. There is a one to one relationship between cells of the inferior olive and Purkinje cells. Some details of olivocerebellar projections are given in Fig. 12.12.

The accessory olivary nuclei receive afferents from all levels of the spinal cord (spino-olivary tract) conveying both exteroceptive and proprioceptive impulses. These impulses reach the cerebellum through olivocerebellar fibres (which are completely crossed). We may, therefore, speak of a spino-olivo-cerebellar pathway. Exteroceptive and proprioceptive impulses also reach the olivary complex through the nucleus gracilis and cuneatus, and through the trigeminal nuclei. The inferior olivary nucleus also helps to connect the cerebral cortex (motor area), the thalamus, the corpus striatum, the red nucleus, and the reticular formation to the cerebellum.

1.              The spinal sensory input to the inferior olivary nucleus is received mainly by the dorsal accessory olive. These inputs are relayed to the vermis and pars intermedia of the cerebellar cortex.

3.              Vestibular inputs reach outlying cell groups related to the medial accessory olive; and are relayed to the nodule

The fibres reaching the olivary complex from the red nucleus, and from the central grey matter of the midbrain, constitute the central tegmental tract (or fasciculus). On reaching the inferior olivary nucleus these fibres spread out as a thin layer around the inferior olivary nucleus, forming a layer called the olivary amiculum.

The cerebellar nuclei which receive collaterals from different parts of the inferior olivary complex (Fig. 12.12) give a GABAergic feed back to the corresponding part of the complex. The cerebellum also influences the olivo-cerebellar output directly through the red nucleus.

Connectons between cerebellum and reticular formation

The cerebellum receives fibres from and sends fibres to the reticular formation (Fig. 12.13). Impulses passing from the cerebellum to the reticularformation are relayed to the spinal cord and to cranialnerve  nuclei  through  reticulospinal  andreticulonuclear pathways; and to the thalamusthrough reticulothalamic fibres. Details of theseconnections are as follows. 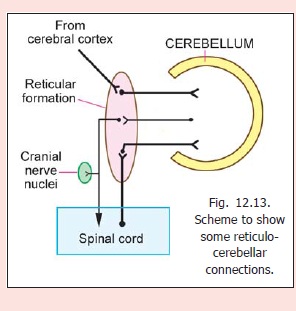 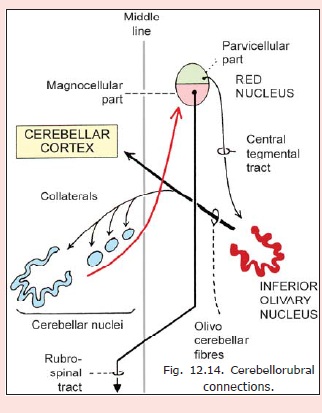 Cerebellar nuclei project to the lateral reticular nucleus and the NRTP. Fibres to the lateral reticular nucleus are mainly from the fastigial nucleus. Some of these fibres reach the reticular formation through the descending branch of the superior cerebellar peduncle. Fibres from the fastigial nucleus also reach the tegmentum of the midbrain (including the dorsal tegmental nucleus, the central grey, and the vertical gaze centre), the raphe nuclei and the locus coeruleus. Through some of these connections the cerebellum can influence visceromotor function.

Fibres from the dentate, emboliform and globose nuclei end in the medial reticular formation of the pons and medulla and in the NRTP (mainly from emboliform nucleus).

Fibres arising in cerebellar nuclei (mainly emboliform and globose, with some from fastigial and dentate nuclei) pass through the superior cerebellar peduncle to reach the red nucleus (Fig.12.14). The significance of these connections is as follows.

a.              Neurons in the caudal magnocellular part of the red nucleus give origin to the rubrospinal tract (which is not prominent in man). Through this tract the cerebellum influences motor neurons in the spinal cord. In this cerebello-rubrospinal pathway there is a double decussation. The cerebellorubral fibres cross in the decussation of the superior cerebellar peduncle, while the rubrospinal fibres cross in the ventral tegmental decussation. As a result the cerebellum influences the same side of the spinal cord through this pathway.

b.              Fibres arising in the cranial parvicellular part of the red nucleus descend through the central tegmental tract to the inferior olivary complex. They can influence the activity of olivo-cerebellar fibres.

c.               Some fibres from the red nucleus projectback to cerebellar nuclei. These nuclei are also influenced indirectly through collaterals reaching them from olivocerebellar fibres.

Fibres arising in the dentate nucleus (and a few in the emboliform, globose and fastigial nuclei) pass through the superior cerebellar peduncle, to reach the thalamus of the opposite side, either directly, or after relay in the red nucleus.

Fibres ascending from the fastigial nucleus reach the tectum.