Basic Structure of the Cerebellar Cortex

Basic Structure of the Cerebellar Cortex

In striking contrast to the cortex of the cerebral hemispheres, the cerebellar cortex has a uniform structure in all parts of the cerebellum. It may be divided into three layers (Fig. 12.1) as follows. 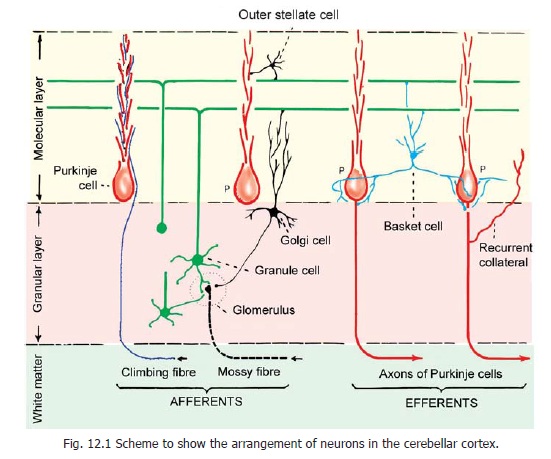 The neurons of the cerebellar cortex are of five main types.

The processes of these neurons have a definite orientation in relation to cerebellar folia. The main relationships are illustrated in Figs 12.1 and 12.2. The neurons in the molecular layer are supported by large neuroglial cells.

The Purkinje cell layer is unusual in that it contains only one layer of neurons. The cell bodies of these neurons are large and flask-shaped. The cells are evenly spaced. A dendrite arises from the ‘neck’ of the ‘flask’ and passes ‘upwards’ into the molecular layer. Here it divides and subdivides to form an elaborate dendritic tree. The branches of this ‘tree’ all lie in one plane (like the fins of a fan; or like a vine branching against a wall, Fig. 12.2). This plane is transverse to the long axis of the folium. As a result of this arrangement the dendritic trees of adjoining Purkinje cells lie in planes more or less parallel to one another. 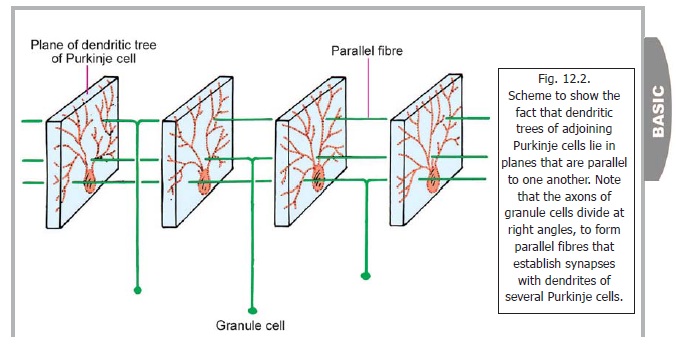 The axon of each Purkinje cell passes ‘downwards’ through the granular layer to enter the white matter. As described later these axons constitute the only efferents of the cerebellar cortex. They end, predominantly, by synapsing with neurons in cerebellar nuclei. They are inhibitory to these neurons.

These are very small, numerous, spherical neurons that occupy the greater part of the granular layer. The spaces not occupied by them are called cerebellar islands. These islands are occupied by special synaptic structures called glomeruli.

Each granule cell gives off three to five short dendrites. These end in claw-like endings which enter the glomeruli where they synapse with the terminals of mossy fibres . The axon of each granule cell enters the molecular layer. Here it divides into two subdivisions each of which is at right angles to the parent axon (forming a T-junction). These axonal branches of granule cells are called parallel fibres. The granule cells being extremely numerous, the parallel fibres are also abundantand almost fill the molecular layer. The parallel fibres run at right angles to the planes of the dendritic trees of Purkinje cells. As a result each parallel fibre comes into contact, and synapses, with the dendrites of numerous Purkinje cells. Parallel fibres also synapse with Golgi cells, basket cells and stellate cells. 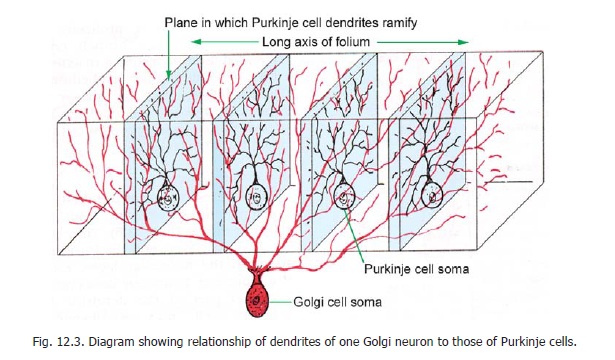 In addition to the dendrites and axons of the cells described listed, the cerebellar cortex contains fibres that are terminations of cerebellar afferents. Histologically, these are of two distinct types.

All fibres entering the cerebellum, other than olivocerebellar, end as mossy fibres. As explained below, afferent inputs through mossy fibres pass through granule cells to reach Purkinje cells.

These fibres represent terminations of axons reaching the cerebellum from the inferior olivary complex (Fig. 12.4). They pass through the granular layer, and the Purkinje cell layer, to reach the molecular layer. Each climbing fibre become intimately associated with the proximal part of the dendritic tree of one Purkinje cell, and establishes numerous synapses on them. (These are called climbing fibres as they appear to climb up along the Purkinje cell dendrites).

There has been considerable doubt regarding the source of mossy fibres and of climbing fibres. 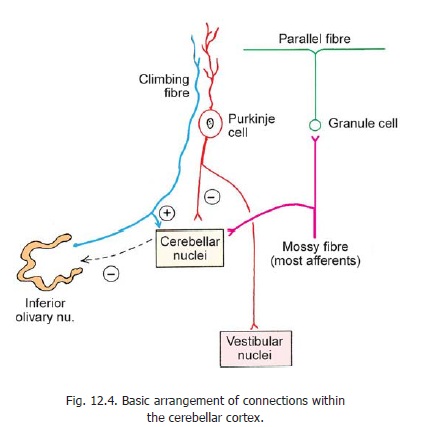