This is the fusion of the ovum and the spermatozoon, and it initiates the beginning of a new life. During ovulation the ovum which is released from the ovary is propelled towards the fallopian tube.

This is the fusion of the ovum and the spermatozoon, and it initiates the beginning of a new life. During ovulation the ovum which is released from the ovary is propelled towards the fallopian tube. During intercourse millions of spermatozoa released and deposited at the upper vaginal travel towards the fallopian tube. Aided by the alkaline cervical mucous secretion at the time of ovulation they travel to the fallopian tubes where they meet the ovum just released during ovulation. Several hundred of them bind the ovum (zonal pellucida) but only one spermatozoon can fertilize at a time. The sperm are viable for 24-72 hours within the female reproductive system. As soon as fusion occurs between the spermatozoon and the nucleus of the ovum, the zonal pellucida goes through chemical changes releases an enzyme which make it impossible for other spermatozoa to penetrate. The membrane of the spermatozoon breaks; the tail separates and disappears, living a naked male pronucleus. The fertilized ovum is known as the ZYGOTE. A new individual has begun its journey till death.

Within a few hours of fertilization process of rapid mitotic cell division, known as cleavage starts (2nd cleavage which has been arrested at metaphase resumes ending in Haploid number). Within 3 days a solid mass of uniform cells of 16 segments has formed known as the MORULA (Mulberry). During this period the egg is gently propelled from the ampulla tube where fertilization took place, along the tube towards the uterine cavity with its peristalsis and wavelike motion of cilia. With further development central cavity is formed in the morula and the cell is now moved to one pole, aggregate to form the inner cell mass from where the embryo and the amnion will be formed, and the fluid on the other pole. At this stage the ovum is known as the BLASTOCYST, or BLASTULA.(By 4½ days the blastocyst has divided up to 100cells and within approximately 6 days, reaches the decidua of the uterus where implantation takes place.). The outer wall of the blastocyst is composed of fluid –filled cavity of ( Blastocele surrounded by a single layer of cells) blastocele called TROPHOBLASTfrom where the placenta and the chorion areformed. It oxidizes the endometrial vascular walls, it is capable of eating through the decidua and embeds, and it provides the growing embryo with link to maternal circulation for transportation of nutrients and Oxygen. At this stage the zonal pellicuda has disappeared and the Zygote is ready to embed. A layer of cells connect the inner cell mass to the trophoblast, this forms the body stalk.

Sites vary from one pregnancy to another, but most often the trophoblast implants itself in the upper segment of the uterus usually within seven days. Some women may experience slight vaginal bleeding during implantation (implantation bleeding). As soon as the trophoblast touches the already prepared uterus especially with the side of the inner cell mass lies free for 2-3 days, it sticks to the endometrium and secretes an enzyme which erodes the endometrial cells and begins to burrow into the endometrium. Three to four days after implantation, the blastocyst has penetrated very far and completely embedded and the uterine epithelium covered the entrance the trophoblast has proliferated and penetrated deeply in the uterus. This takes place by 11th day after ovulation. The stoma of the endometrium now reacts to the invasion by accumulating glycogen and lipid and the area become highly vascularised. The depression formed is filled up with maternal blood which surrounds the ovum. At this time the endometrium is referred to as the decidua.

Formation of the Decidua

After fertilization the endometrium of the uterus is known as the decidua. Oestrogen increases the size to about 4 times of its pre-gravid thickness, the corpus Luteum, and produce large amount of progesterone which increases the secretion of the endometrial glands and increases the blood vessels. So it makes the endometrium to be softer, spongy and vascular for the fertilized ovum to embed and nourishes itself. The decidua is transformed into 3 layers.

1.           The Basal layer (Basement): This lies immediately above the myometrium. It remains unchanged in itself but regenerate the new endometrium after delivery.

2.           The functional layer (cavernous layer): it consists of tortuous glands rich in secretions. The stoma cells are enlarged in what is known as the decidua reaction which provides defense against excessive invasion by the syncytiotrophoblast and limit it to this spongy layer. It provides anchor for the placenta and allows it to have access to nutrition and 0xygen. It is the functioning layer.

3.           The compact layer it covers the surface of the decidua and composed of closely packed stoma cells, polygonal in shape and it contains necks of glands.

The blastocyst forms a small nodule in the decidua which bulges out into the uterine cavity progressively as it continues to enlarge and divides the decidua into three areas.

1.           Decidua Basalis: This is the area of the decidua underneath the developing ovum.

As development continues the ovum grows and completely fill up the uterine cavity, at about the 12th week the decidua capsularis comes in contact with the decidua vera, it fuses with it and degenerates.

During the first 8 weeks of pregnancy, embryonic tissues and the surrounding supportive structures are formed simultaneously. It is during this period that the embryo is at greatest risk for malformation. From the 8th week through the end of pregnancy, the embryo is known as the FETUS. The supportive structures that nourish and maintain the growing fetus are called the fetal membranes. These include the yolk sac, amnion, chorion, decidua and the placenta.

As development continues small projections begin to appear all over the surface of the blastocyst known as the tropoblast, becoming most prolific at the area of contact – are a of inner cell mass. The trophoblast differentiates into layers.

1.           The outer syncytiotropoblast (syncitium): it is capable of breaking the decidua tissue during embedding. It erodes the wall of the blood vessels, making nutrient in the maternal blood accessible to the developing embryo. It acts as a protective layer between the chorionic villi.

2.           Cytotrophoblast: This is a well defined single layer of cells which produce Human Chorionic gonadotrophin (HCG). It informs the corpus Luteum that pregnancy has begun, so as to continue to produce progesterone and oestrogen. The progesterone maintain the integrity of the decidua so that shedding does not take place (menstruation is suppressed), while the high level of oestrogen suppresses the production of FSH. The HCG is produced in high level in the first trimester and it is the basis for pregnancy test.

3.           The Mesoderm: Consist of loose connective tissue. It is continuous with that in the inner cell mass where they join in the body stalk which later develops into the umbilical cord.

The trophoblast later form finger like process called –Primitive villi which develop into placenta and the chorion.

As the trophoblast is developing into the placenta which will nourish the fetus, the inner cell mass is forming the fetus itself, umbilical cord and the amnion. The cells differentiate into three layers each of which will form particular parts of the fetus.

The Ectoderm: Mainly forms the skin, nervous system,mammary glands salivary glands, Pharynx, nasal passage and crystalline lens of the eyes, certain lining of the mucosa, hair, nails, and enamel of the teeth.

The fetus develops it’s own blood like other organs in the body. The maternal and the fetal blood never mix. During the later weeks (4 wks) the organs like the liver and heart start to function.

1. The Amniotic Cavity: this lies on the side of theectoderm. The cavity which is filled with fluid gradually enlarges and fold round the embryo to enclose it the lining forms the amnion. It later enlarges in the chronic cavity and comes in contact with the chorionic membrane.

2.  The Yolk Sac: Lies on the side of the endoderm andprovides nourishment for the embryo until the placenta(alimentary tract

After birth the remnants of the yolk sac is the vestigial structure in the base of the umbilical cord, known as vitelline duct.

The developing of spring is referred as EMBRYO after fertilization up to 8 weeks after which the conceptus is known as FETUS until birth. 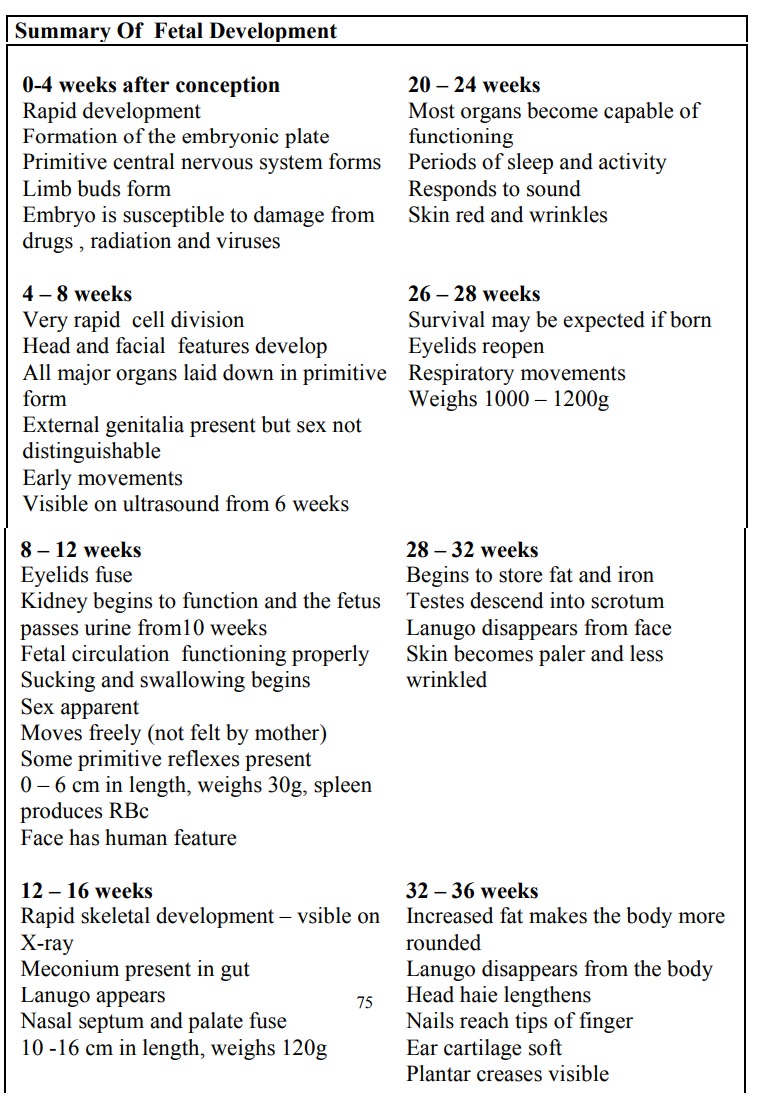