The fetus derives its supply of oxygen and nutrients from the placenta so because of this the whole of fetal blood has to pass through the organ.

The fetus derives its supply of oxygen and nutrients from the placenta so because of this the whole of fetal blood has to pass through the organ. The lungs and the alimentary tract being functionless during pregnancy require only a small blood supply first to nourish them. The fetus therefore has a blood circulation which differ from that of its post-natal life, at birth there is a dramatic alternation in the situation, an almost instantaneous change occurs. All organs must be mature and normal to take over. The fetal haemoglobin carries 20-30% more oxygen than adult haemoglobin. This is obtained indirectly from the maternal circulatory system. Through the umbilical vain that extends from the placenta oxygen from the chorionic villi enters the placenta through the umbilical vein and carbondioxide is removed by the umbilical arteries. The fetus relies on three shunt-like structures to supply Oxygen and nutrient and to exchange of waste products they are known as temporary structures. 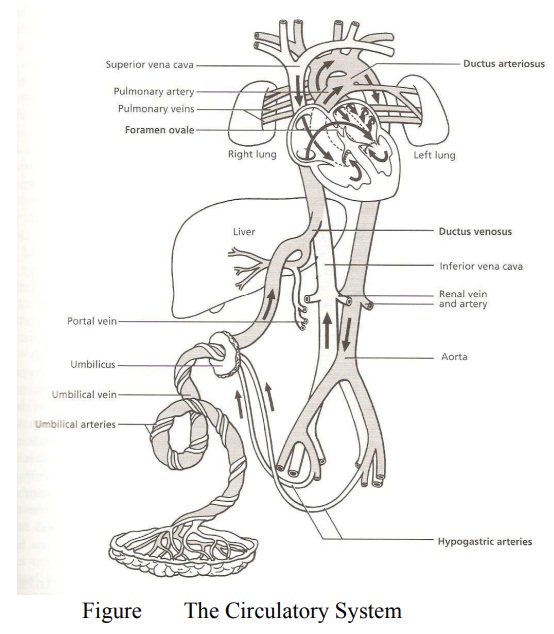 1.           The Ductus venosus: (Vein to vein)This vessel (pure) carries oxygenated blood that has been form replaced by the placenta the umbilical vein to the inferior vena cava. It branches just before it reaches the vena cava to supply the liver.

2.           The Foramen Ovale; (Oval opening) A temporary opening between the two atria. It allows majority of the blood entering from the inferior vena cava to pass across from the right atrium to the left atrium.

3.           The Ductus Arteriosus: (Arteries to arteries): Carries deoxygenated blood from the pulmonary artery to the descending arch of the aorta enters it just after the subclavia and carotid arteries branch off. By this it bypasses the pulmonary circulation.

5.           The umbilical vein: Carries oxygenated blood from the placenta to the undersurface of the liver. A branch from it supplies the liver.

The course of circulation

From the placenta, the umbilical vein carrying pure oxygenated blood passes through the abdominal wall to the undersurface of the liver (this is the only vein that carries pure blood). Just before it joins the Ductus venosus, part of it branches to supply the liver. The Ductus venosus carries the rest of the blood to the inferior vena cava where it mixes with the impure blood from the lower part of the body. The hepatic vein also empties its content into the inferior vena cava. The blood then enters the right atrium. Most of it (75%) shunt through the foramen ovale to enter the left atrium and passes into the left ventricle where it enters the aorta. (it has highest oxygen content in fetal circulation) and the major portion of it goes via the branches of the arch of the aorta to –the great vessels of the neck (Coronnal and carotid arteries) to supply the brain and the heart and the upper limbs also benefit (subclavia arteries). This ensure that the brain and the heart receive freshly oxygenate blood. The remaining pass into the descenting arch of the aorta.

The de-oxygenated blood from the head neck and arms retune through the superior vena cava to the right atrium, there it joins the small stream from the inferior vena cava (though not completely mixed) and flow into the right ventricle. From here the blood passes into the pulmonary artery, small amount goes to supply the lungs to nourish them while the rest flows through the Ductus Arteriosus into the aorta. Some are distributed to the abdomen, pelvis, visceral and the lower limbs, while the rest pass through the hypogastric arteries which are branches of the internal iliac arteries, into the umbilical arteries, thus transporting the deoxygenated blood back to the placenta where interchange between the fetal and the maternal blood takes place for oxygenation through the processes of osmosis and diffusion and selective action of cytotrophoblast and syncytiotrophoblast. The impure blood from the legs return back into the inferior vena cava to join the circulation again the whole process takes about 30 seconds.

Changes in fetal circulation at birth

The first important change is brought about by the respiratory effort of the child at birth. As the baby gasps, takes a breath and cries, the lungs expand and blood flow into them. The blood which has been passing through the Ductus arteriosus to the aorta now flows to the lungs.

The ductus arteriosus which is no more required contracts and closes. It atrophies to become ligamentum artenosus. The blood now returns from the lungs through the pulmonary vein to the left atrium.

With the clamping of the cord circulation in the umbilical vein ceases and the vein collapses. As a result of this collapse of the umbilical vein, blood no more flows through the Ductus venosus, it collapses to become the ligamentum venosus, and later form a support for the portal vein. This result in reduced pressure of blood in the right atrium, with the establishment of respiration and enhanced pulmonary circulation the circulation the pressure of blood in the left atrium increases. These changes of pressure of the two sides of the heart (Atria) result in closure of the Foramen Ovale, it later become fibrosed and form the adult inter-atrial septum known as “Fossa valis”.

The abdominal portion of the umbilical vein gradually atrophies and becomes fibrosed to form a ligamentum teres which runs between the umbilicus and the liver, enclosed in a fold of peritoneum known as the falciform ligament.

The ovum is receptive to fertilization 24 – 48 hour s after ovulation. It is important to note that the process of fertilization include the journey through the fallopian tube to the uterus and critically depends on proper preparation of the reproductive organs systems across the cycle. Successful implantation depends on the action of progesterone on the cells of the uterine muscle fibers. The first few weeks of conception happens to be the period when the fetus is highly vulnerable to congenital abnormalities and factors that can predispose to this must be avoided. The survivals of the fetus depends on the integrity of the placenta , so it must be preserved in situ throughout pregnancy , during pregnancy women must be nutritionally adequate to be able to meet the needs of the growing fetus