Chapter: Obstetric and Gynecological Nursing : Anatomy of Female Pelvis and the Fetal Skull

The female pelvis is structurally adapted for child beaing and delivery.

The female pelvis is structurally adapted for child beaing and delivery.

There are four pelvic bones

Each innominate bone is composed of three parts.

2.              The ischium the thick lower part. It has a large prominance known as the ischial tuberosity on which the body rests when sitting. Behind and a little above the tuberosity is an inward projection, the ischial spine. In labour the station of the fetal head is estimated in relation to ischial spines.

The space enclosed by the body of the pubic bone the rami and the ischium is called the obturator foramen.

B. The sacrum - awedge shaped bone consisting of five fused vertebrae. The upper border of the first sacral vertebra is known as the sacral promontary. The anterior surface of the sacrum is concave and is referred to as the hallow of the sacrum.

There are four pelvic joints

·                 The symphysis pubis is a cartilgeous joint formed by junction of the two pubic bones along the midline.

In non pregnant state there is very little movement in these joints but during pregnancy endocrine activity causes the ligaments to soften which allows the joints to give & provide more room for the fetal head as it passes through the pelvis.

Each of the pelvic joints is held together by ligaments

The true pelvis is the bony canal through which the fetus must pass during birth. It has a brim, mid cavity and an out let. The pelvic brim is rounded except where the sacral promontory projects into it. The pelvic cavity is extends from the brim above to the out let below. The pelvic out let are two and described as the anatomical and the obstetrical. The anatomical out let is formed by the lower borders of each of the bones together with the sacrotuberous ligament. It is diamond in shape. The obstretrical out let is of the space between the narrow pelvic strait and the anatomical outlet.

Important diameters of the pelvis

Diagonal conjugate - a line from the sacral promontory toward the lower boarder of the symphysis pubis and measures 12.5 centimeter. It is measured by pelvic examination.

The pelvic out let

Table 1. Measurements of the pelvic canal in centimeters

The four types of female pelvis

Table 2 .Features of the four types of female pelvis 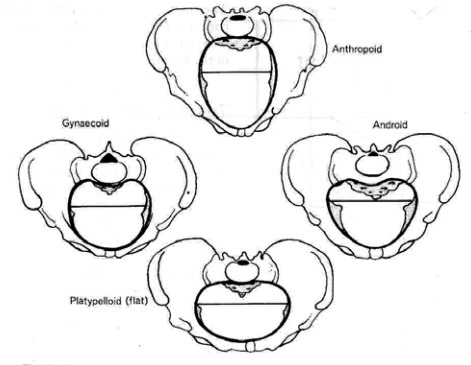 The pelvic floor or diaphragm is amuscular floor that demarcates the pelvic cavity and perineum. Its strength is inforced by its associated condesed pelvic fascia, therefore, it is important for pelvic organs protection.

It supports the weight of the abdominal and pelvic organs

The muscles are responssible for the voluntary control of micturation, defication and play an important part in sexual intercourse.

It infulences the passive movement of the fetus through the birth canal and relaxes to allow its exit from the pelvis.

The fetal head is the most difficult part to deliver whether it comes first or last. It is large in comparison with the ture pelvis and some adptation between skull and pelvis must take place during labour.An understanding of the landmarks and measurements of the fetal skull enables to recognize normal presentation and positions and to facilitate delivery with the least possible trauma to mother and child. The skull is divided into the vault, the base and the face. The vault is the large dome shaped part above the imaginary line drowns between the orbital ridges and the nape of the neck.

The base is composed of bones which are firmly united to protect the vital centres in the medulla.

Bones of the Vault

There are five main bones in the vault of the fetal skull.

Sutures are cranial joints and are formed where two bones adjoin. Where two or more sutures meet, a fontanell is formed.

1.              The lambdoidal suture is shped like the Greek letter lambda and separates the occipital bone from the two parital bones.

3.              The coronal sutrue separetes the frontal bones from the parital bones, passing from one temple to the other.

1.              The posterior fontanelle or lambda is situated at the junction of the lambdiodal and sagital sutures. It is small triangular in shape and can be recogonized vaginally.

2.              The anterior fontanelle or bregma is found at the junction of the sagital, coronal and frontal sutures and recognized vaginally.

The sutures and fontanelles, because they consist of memberanous spaces, allow for a degree of overlapping of the skull bones during labour and delivery.

Regions of the Skull

i. The occiput lies between the foramen magnum and the posterior fontanelle. The part below the occipital protuberance is known as the suboccipital region.

ii. The vertex is bounded by the posterior fontanelle, the parital eminences and the anterior fontanelle. Of the 96% of the babies born head first, 95% present by the vertex.

iii. The sinciput or brow extends from the anterior fontanelle and the coronal suture to the orbital ridges.

iv.    The face is small in new born baby. It extends from the orbital ridges and the root of the nose to the junctions of the chin and the neck. The point between the eye brows is knowns as the glabella. The chin termed the mentum and is an important land mark.

Land Marks of the Fetal Skull 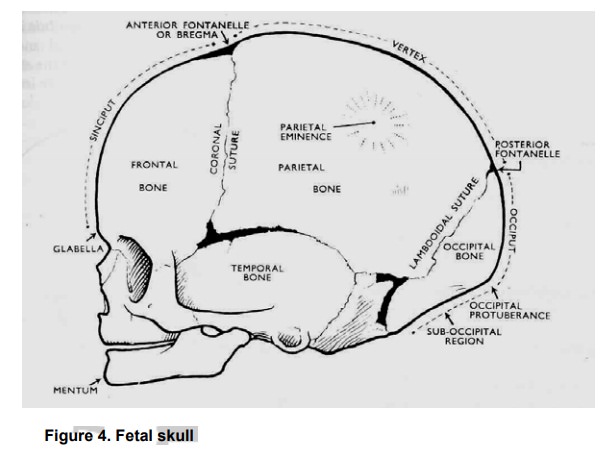 Diameters of the Fetal Skull

The measurement of the skulls are transverse, anteropositerior or longitudinal.

. Biparietal diameter 9.5 cm between the parietaleminence

. Bitemporal diameter 8.2cm between the furthersepoints of the coronal suture at the temples.

. Suboccipitobregmatic 9.5 cm from below the occipitalprotuberance to the center of the anterior fontanelle or bregma

.       Suboccipitofrontal 10cm from below occipital protuberance to the center of the frontal suture.

.       Occipitofrontal 11.5 cm from the occipital protuberance to the glabella.

.       Mentovertical 13.5cm from the point of the chin to the highest point on the vertex sightly nearer to the posterior than to the anterior fontanelle.

.       Submentovertical 11.5 cm from the point where the chin joins the neck to the highest point on the vertex.

.       Submentobregmatic 9.5cm from the point where the chin joins the neck to the center of the bregma. 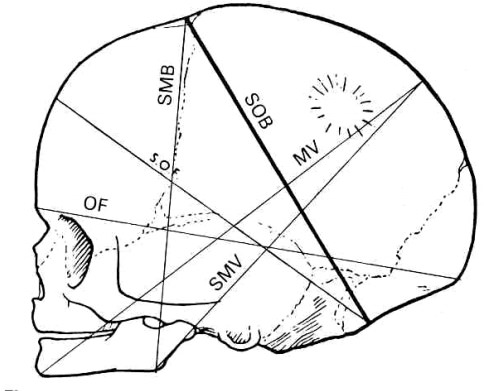