A number of cardinal factors exert a positive influence on the phenomenon of solvent extraction, namely : (a) Effect of temperature and inert solutes, (b) Effect of pH on extraction, (c) Effect of ion-pair formation, and (d) Effect of synergistic extraction.

A number of cardinal factors exert a positive influence on the phenomenon of solvent extraction, namely :

(a) Effect of temperature and inert solutes,

(b) Effect of pH on extraction,

(c) Effect of ion-pair formation, and

These factors shall be discussed briefly below :

1. EFFECT OF TEMPERATURE AND INERT SOLUTES

The physical as well as chemical interactions of a solute is capable of changing its apparent partition coefficient between a pair of solvents. Therefore, it is absolutely necessary to take this into consideration while selecting an appropriate extraction-system. Craig and Craig* have advocated that the partition coefficients are normally not sensitive to temperature when the two solvents in question are more or less immiscible and also the concentrations are fairly low in both the phases. Thus, the effect of temperature on the partition coefficient may be estimated conveniently from its effect on the solubilities of the substance in the two respective solvents. By substituting the solubilities (e.g., S1 and S2) in Eq. (b) it is possible to estimate K.

The effect of inert solutes, such as : calcium chloride, magnesium chloride and sucrose, can also be employed judiciously and efficaciously in the development of solutions to difficult extraction problems by allowing efficient extractions from the water into such solvents as acetone, ethanol and methanol that are found to be completely miscible with water in the absence of salt. Matkovitch and Cristian* found the above three inert solutes to be the best agents for salting acetone out of water. It has been observed that the acetone layer that separated from a saturated aqueous solution of CaCl2 exclusively contained 0.32 ± 0.01% water (v/v) and 212 ppm salt (w/w) at equilibrium.

2. EFFECT OF pH ON EXTRACTION

Generally, it has been found that the organic acids and bases do exist in aqueous solution as equilib-rium mixtures of their respective neutral as well as ionic forms. Thus, these neutral and ionic forms may not have the same identical partition coefficients in a second solvent ; therefore, the quantity of a substance being extracted solely depends upon the position of the acid-base equilibrium and ultimately upon the pH of the resulting solution. Hence, extraction coefficient (E) may be defined as the ratio of the concentrations of the substance in all its forms in the two respective phases in the presence of equilibria ; and it can be expressed as follows :

In fact, the actual effect of the equilibrium on the extraction may be shown by determining the extrac-tion coefficient for the system :

where, A = Extract with partition coefficient Kp, A and

Therefore, for this particular system the efficiency coefficient E may be expressed as follows :

Now, substituting Eq. (ii) and Eq. (iii) into Eq. (iv) and subsequently simplifying, we shall get :

Now, assuming that only A extracts (i.e., A being a neutral organic base and AH the conjugate acid),

The following inferences may be arrived at on the basis of Eq. (vi), namely :

(b) Under a given set of experimental parameters the ultimate effect of the ‘equilibrium’ shall be to reduce the amount extracted, and

(c) Forcibly shifting the ‘equilibrium’ toward the extractable species by adjusting the pH helps to minimise the effect of the equilibrium thereby rendering E almost equal to Kp, A.

In conclusion, it may be observed that the pH for an ‘extraction system’ must be selected in such a fashion so that the maximum quantum of the analyte is present in the extractable form, that obviously suggests that the analyte should always be in the form of either a free base or a free acid. From the actual practical experience it has been noticed that a good-working range lies between 95 to 97% present in the extractable form.

Ion-pair formation needs its due recognition because it very often gives rise to unexpected extrac-tions. In true sense, ion-pair may be regarded as a close association of an anion and cation, and therefore, it usually takes place either in a polar or a non-polar solvent. In reality, the ion-pairs are invariably formed by virtue of the union between comparatively large organic anions and (much smaller) cations. Interestingly, the resulting ion-pairs have been found to show their appreciable solubility in polar solvents ; and hence, these species may be extracted conveniently under such experimental parameters where neither individual compo-nent ion could.

A few vital criteria towards the formation of an improved aqueous extractable ionic species are, namely :

A few typical examples shall be discussed here to explain the chelate-formation :

Example 4 : Cl– ion serves as an ‘appropriate anion’ that favourably combines with many aromatic amines and alkaloids which may ultimately be extracted from the corresponding aqueous solutions into chloroform as their respective chlorides*.

Synergism : It may be defined as ‘the process whereby two different reagents when employed together are capable of extracting a metal ion with a distinct and marked efficiency, in comparison to a condition when the same two reagents are used individually’.

Example : (i) : Complexation of Mn2+ with dithizone and pyridine :

It has been observed that the complex formed by Mn2+ with dithizone alone is of no practical analyti-cal utility because of the fact that it undergoes decomposition very quickly. However, the addition of a base, such as : pyridine into the Mn2+ plus dithizone complex yields a red-complex, which is fairly stable to oxidation and light; and, therefore, forms the basis for a very sensitive photometric method employed in estimating trace amounts of Mn2+.

Equation : Following is the chemical reaction of the above complex formation :

Noticeably, the reaction of Ni2+ with dithizone is quite slow and sluggish. Nevertheless, this slow reaction is significantly accelerated by the addition of nitrogen-containing bases like 1, 10-phenanthroline. The resulting complex may be represented by the following equation : 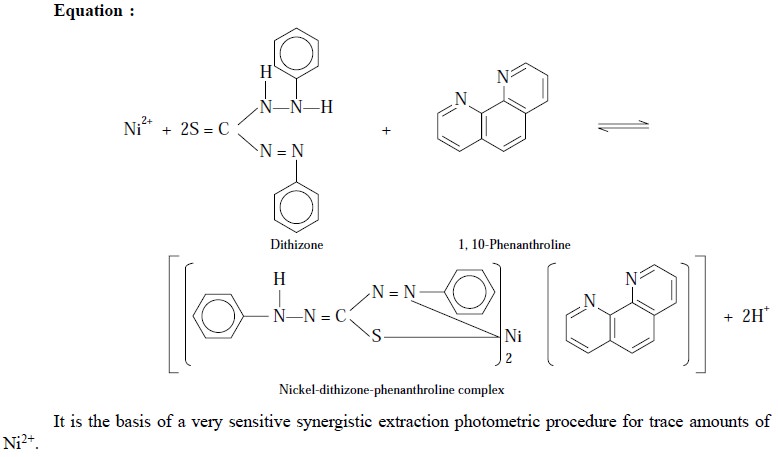