Is air a thing or a composite mixture?

For long time, that is, until eighteenth century, human thought ‘air’ as a fundamental constituent of matter. However an ingenious experiment conducted by Joseph Priestley in 1774 showed that "air is not an elementary substance, but a composition," or mixture of gases. He was also able to identify a colourless and highly reactive gas which was later named ‘oxygen’ by the great French chemist Antoine Lavoisier.

Priestley took a tub of water and made a float and placed a candle on it. He covered the candle with a glass jar. 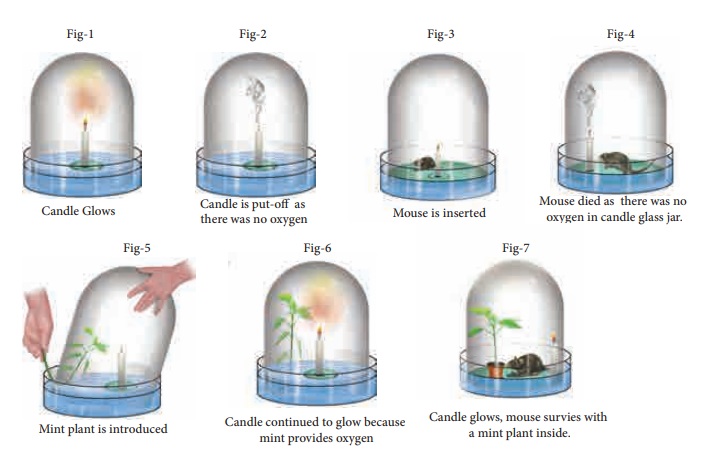 [As the bottom portion of the jar was filled with water, no air can enter or exit and hence the jar was completely sealed (Fig-1)]. As you would have guessed the candle flame was extinguished in a very short time. He used a magnifying glass to focus the sun rays to light the candle. Thus he tried to to relight the candle many times without opening the sealed jar (Fig-2). The candle could not be relit. What can we make out of it?

[Later chemist named the substance necessary for burning as oxygen and during the process of burning oxygen is converted mostly into carbon dioxide.]

Now as the jar was inside the water, Priestley could gently lift the jar and place a live mouse inside it without allowing outside air to enter the jar (Fig-3). Without oxygen, as you would have guessed, the mouse died (Fig-4). It was clear that oxygen was necessary for the survival of the mouse.

In the next step, he gently lifted the jar and placed a mint plant (Fig-5). (Note: Look at the Figure- 5; you could see that the plant is inserted into the bell jar when the jar is very much inside the water. This is done to ensure that the outside air is not entering into the bell jar.) Plant being a living thing like mouse, perhaps he thought, would die. Instead, the plant survived. After placing the mint plant, he lit up the candle and it continued to burn (Fig-6).

In fourth experiment, he took a jar, burned a candle and converted all oxygen into carbon dioxide. He placed a mint plant and a mouse into this jar. Both the plant and the mouse survived (Fig-7). He found that plants and animals have a synergy. Animals consume oxygen and release carbon-di-oxide and plants take up carbon dioxide and release oxygen.

During 1730 – 1799, Jan Ingenhousz showed that sunlight is essential to the plant to carry out photosynthesis and also to purify air that is fouled by breathing animals or by burning candles.

From these experiments it was clear that “air” was a composite mixture of many gases like oxygen and carbon-di-oxide.

Proof for release of oxygen in photosynthesis 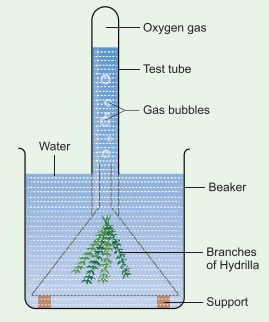 Leave the beaker in sunlight for some time. You will notice some bubbles rising in the test tube. The bubbles contain oxygen released by the plant during photosynthesis. If we show a glowing splinter to the collected air, it burns brightly. This shows that the collected gas is oxygen.

Test for the proportion of Oxygen and Nitrogen in air

Activity 3: We know that iron undergoes rusting with oxygen and forms iron oxide. This process can be used to estimate the percentage of oxygen in air, which has been removed by the rusting reaction.

Take a small portion of iron wool, press it into a 20 ml graduated test tube and wet it with water. Tip away excess of water. Take a 500ml beaker and fill half of the beaker with water. Invert the test tube and place it in air. Leave the arrangement at least for a week without making any disturbance to the test tube. 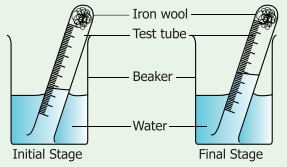 Daniel Rutherford, a Scottish chemist, discovered nitrogen. He removed oxygen and converted it into carbon-di-oxide using an inverted bell jar using a burning candle. He passed this air without oxygen through lime water and removed carbon-di-oxide also.

Test for Carbon-di-oxide in air

Pour some lime water in a glass tumbler. Bubble some air using a straw through the 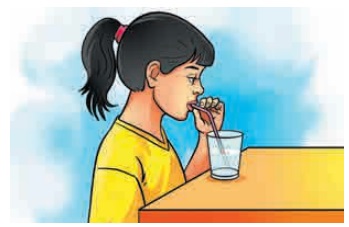