From Priestley's experiment which was followed by Ingenhousz and Rutherford, we came to know that air was not just one substance. We will now describe what air is made up of. This is called composition of air.

The composition of air in terms of percentage of its various components can be written as follows: 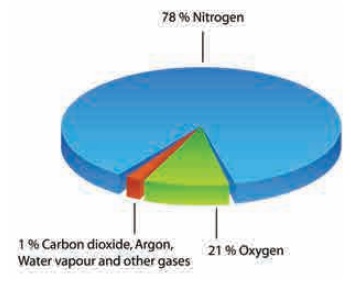 The composition of air changes slightly from place to place and also from season to season. For example,

* Air over industrial cities usually has a higher amount of carbon-di-oxide in it than the air over open spaces.

* Air in coastal areas may have more water vapour than inland areas.

* The amount of dust in the air is more in windy places than other areas.

Test for the presence of dust particles in air

Shall we do an activity to calculate the amount of dust particles in air from our area?

Ensure that the dust collectors do not get blown away. After the time scheduled for performing this activity is reached, remove the paper and count the number of collected dust particles in the marked area in all the sheets, using a magnifying glass at the dust collector. We can see something similar to the diagram below:- 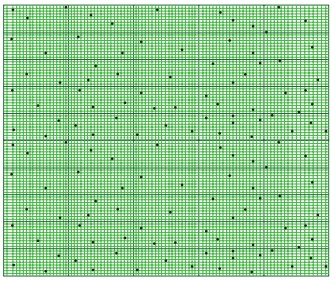 Then, calculate the mean number of dust particles in the marked area.

The range of the dust can also be calculated as given below:-

Collect details from all the areas where we have kept the dust collector sheets. Tabulate the recordings in the table given below:- 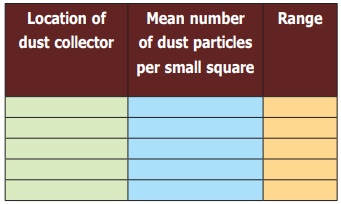 * Which area do you think will have the most dust?

* Which area do you think will have the least dust?

Test for water vapour in air 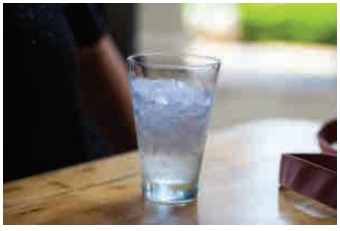 Take a few ice cubes in a glass. Keep it on the table for a few minutes. Observe what happens. You could see tiny droplets of water all over the outer surface of the glass. From where do these droplets come?

The water vapour present in the air condenses on the cold surface of the glass. This shows that air contains water vapour.