Ageing theories which mainly has been categorise into two main categories

Ageing is a result of internal or external assaults that damage cells or organs so they can no longer function properly.

The human lifespan simply reflects the level of free radical damage that accumulates in cells when enough damage accumulates, cells cannot survive properly any more and they just simply give up.

It is well known that mitochondrial DNA is much more oxidized with age than nuclear DNA reactive oxygen species are continuously generated in the mitochondrial electron transport chain.

The immune system is programmed to decline over time which leads to an increased vulnerability to infections, disease and thus aging and death. It is well documented that the effectiveness of the immune system peaks at puberty and gradually declines there after with advance in age. eg. as one grows older antibodies lose their effectiveness. 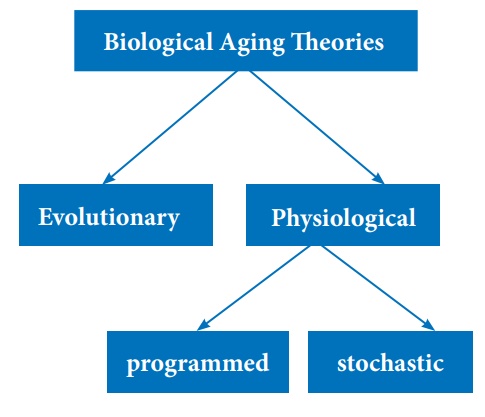 ·           Once an organism has produced viable offspring its body is no longer needed. It then ages and dies.

·           Certain genes may be useful in early life but detrimental in later life.

·           Late acting genes have not been removed because they act after reproduction.