The term hemostasis means prevention of blood loss. Whenever a vessel is severed or ruptured, hemostasis is achieved by several mechanisms: (1) vascular constriction, (2) formation of a platelet plug, (3) formation of a blood clot as a result of blood coagulation, and (4) eventual growth of fibrous tissue into the blood clot to close the hole in the vessel permanently.

The term hemostasis means prevention of blood loss. Whenever a vessel is severed or ruptured, hemostasis is achieved by several mechanisms: (1) vascular constriction, (2) formation of a platelet plug, (3) formation of a blood clot as a result of blood coagulation, and (4) eventual growth of fibrous tissue into the blood clot to close the hole in the vessel permanently.

Immediately after a blood vessel has been cut or ruptured, the trauma to the vessel wall itself causes the smooth muscle in the wall to contract; this instan-taneously reduces the flow of blood from the ruptured vessel. The contraction results from (1) local myogenic spasm, (2) local autacoid factors from the trau-matized tissues and blood platelets, and (3) nervous reflexes. The nervous reflexes are initiated by pain nerve impulses or other sensory impulses that orig-inate from the traumatized vessel or nearby tissues. However, even more vaso-constriction probably results from local myogenic contraction of the blood vessels initiated by direct damage to the vascular wall. And, for the smaller vessels, the platelets are responsible for much of the vasoconstriction by releas-ing a vasoconstrictor substance, thromboxane A2.

The more severely a vessel is traumatized, the greater the degree of vascular spasm. The spasm can last for many minutes or even hours, during which time the processes of platelet plugging and blood coagulation can take place.

Formation of the Platelet Plug

If the cut in the blood vessel is very small—indeed, many very small vascular holes do develop throughout the body each day—the cut is often sealed by a platelet plug, rather than by a blood clot. To understand this, it is important thatwe first discuss the nature of platelets themselves.

Physical and Chemical Characteristics of Platelets

Platelets (also called thrombocytes) are minute discs 1 to 4 micrometers in diam-eter. They are formed in the bone marrow frommegakaryocytes, which are extremely large cells of the hematopoietic series in the marrow; the megakary-ocytes fragment into the minute platelets either in the bone marrow or soon after entering the blood, especially as they squeeze through capillaries. The normal concentration of platelets in the blood is between 150,000 and 300,000 per microliter.

Platelets have many functional characteristics of whole cells, even though they do not have nuclei and cannot reproduce. In their cytoplasm are such active factors as (1) actin and myosin molecules, which are contractile proteins similar to those found in muscle cells, and still another contractile protein, throm-bosthenin, that can cause the platelets to contract; (2) residuals of both theendoplasmic reticulum and the Golgi apparatus that synthesize various enzymesand especially store large quantities of calcium ions; (3) mitochondria and  enzyme systems that are capable of forming adenosinetriphosphate (ATP) and adenosine diphosphate (ADP); (4) enzyme systems that synthesize prostaglandins, which are local hormones that causemany vascular and other local tissue reactions; (5) an important protein called fibrin-stabilizing factor, which we discuss later in relation to blood coagulation; and (6) agrowth factor that causes vascular endothelial cells, vascular smooth muscle cells, and fibroblasts to multiply and grow, thus causing cellular growth that eventually helps repair damaged vascular walls.

The cell membrane of the platelets is also important. On its surface is a coat of glycoproteins that repulses adherence to normal endothelium and yet causes adherence to injured areas of the vessel wall, especially to injured endothelial cells and even more so to any exposed collagen from deep within the vessel wall. In addition, the platelet membrane contains large amounts of phospholipidsthat activate multiple stages in the blood-clotting process, as we discuss later.

Thus, the platelet is an active structure. It has a half-life in the blood of 8 to 12 days, so that over several weeks its functional processes run out. Then it is eliminated from the circulation mainly by the tissue macrophage system. More than one half of the platelets are removed by macrophages in the spleen, where the blood passes through a latticework of tight trabeculae.

Mechanism of the Platelet Plug

Platelet repair of vascular openings is based on several important functions of the platelet itself. When platelets come in contact with a damaged vascular surface, especially with collagen fibers in the vascular wall, the platelets themselves immediately change their own characteristics drastically. They begin to swell; they assume irregular forms with numerous irra-diating pseudopods protruding from their surfaces; their contractile proteins contract forcefully and cause the release of granules that contain multiple active factors; they become sticky so that they adhere to col-lagen in the tissues and to a protein called von Wille-brand factor that leaks into the traumatized tissuefrom the plasma; they secrete large quantities of ADP; and their enzymes form thromboxane A2. The ADP and thromboxane in turn act on nearby platelets to activate them as well, and the stickiness of these addi-tional platelets causes them to adhere to the original activated platelets.

Therefore, at the site of any opening in a blood vessel wall, the damaged vascular wall activates suc-cessively increasing numbers of platelets that them-selves attract more and more additional platelets, thus forming a platelet plug. This is at first a loose plug, but it is usually successful in blocking blood loss if the vas-cular opening is small. Then, during the subsequent process of blood coagulation,fibrin threads form. These attach tightly to the platelets, thus constructing an unyielding plug.

Importance of the Platelet Mechanism for Closing Vascular Holes.  The platelet-plugging mechanism is extremely important for closing minute ruptures in very small blood vessels that occur many thousands of times daily. Indeed, multiple small holes through the endothelial cells themselves are often closed by platelets actually fusing with the endothelial cells to form additional endothelial cell membrane. A person who has few blood platelets develops each day liter-ally thousands of small hemorrhagic areas under the skin and throughout the internal tissues, but this does not occur in the normal person.

Blood Coagulation in the Ruptured Vessel

The third mechanism for hemostasis is formation of the blood clot. The clot begins to develop in 15 to 20 seconds if the trauma to the vascular wall has been severe, and in 1 to 2 minutes if the trauma has been minor. Activator substances from the traumatized vas-cular wall, from platelets, and from blood proteins adhering to the traumatized vascular wall initiate the clotting process. The physical events of this process are shown in Figure 36–1, and Table 36–1 lists the most important of the clotting factors. 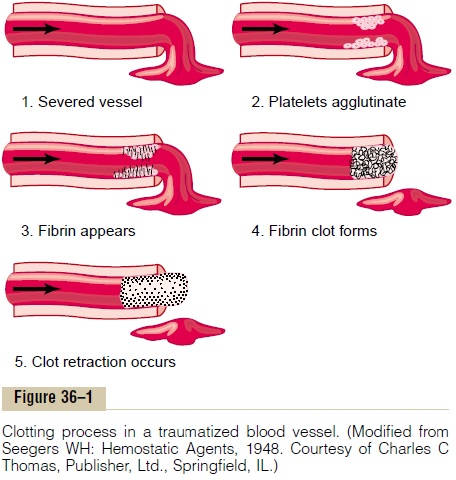 Within 3 to 6 minutes after rupture of a vessel, if the vessel opening is not too large, the entire opening or broken end of the vessel is filled with clot. After 20 minutes to an hour, the clot retracts; this closes the vessel still further. Platelets also play an important role in this clot retraction, as is discussed later. 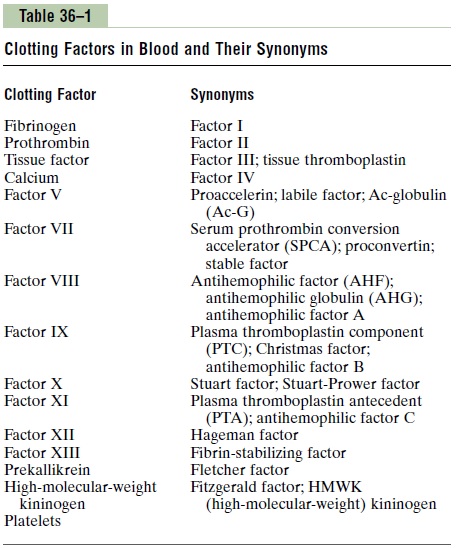 Fibrous Organization or Dissolution of the Blood Clot

Once a blood clot has formed, it can follow one of two courses: (1) It can become invaded by fibroblasts, which subsequently form connective tissue all through the clot, or (2) it can dissolve. The usual course for a clot that forms in a small hole of a vessel wall is inva-sion by fibroblasts, beginning within a few hours after the clot is formed (which is promoted at least partially by growth factor secreted by platelets). This continues to complete organization of the clot into fibrous tissue within about 1 to 2 weeks.

Conversely, when excess blood has leaked into the tissues and tissue clots have occurred where they are not needed, special substances within the clot itself usually become activated. These function as enzymes to dissolve the clot.