Conversion of Prothrombin to Thrombin 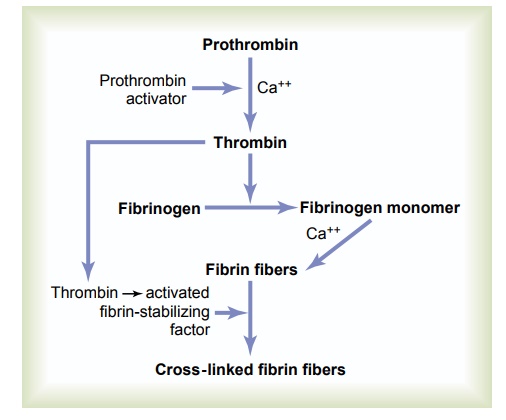 Conversion of Prothrombin to Thrombin

First, prothrombin activator is formed as a result of rupture of a blood vessel or as a result of damage to special substances in the blood. Second, the pro-thrombin activator, in the presence of sufficient amounts of ionic Ca++, causes conversion of pro-thrombin to thrombin (Figure 36–2). Third, the throm-bin causes polymerization of fibrinogen molecules into fibrin fibers within another 10 to 15 seconds. Thus, the rate-limiting factor in causing blood coagulation is usually the formation of prothrombin activator and not the subsequent reactions beyond that point, because these terminal steps normally occur rapidly to form the clot itself. 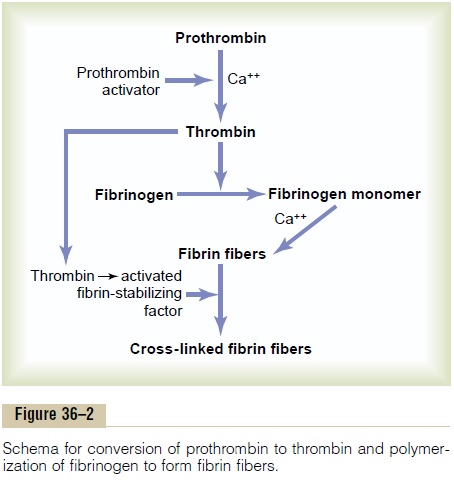 Platelets also play an important role in the con-version of prothrombin to thrombin because much of the prothrombin first attaches to prothrombin receptors on the platelets already bound to the damaged tissue.

Prothrombin and Thrombin. Prothrombin is a plasmaprotein, an alpha2-globulin, having a molecular weight of 68,700. It is present in normal plasma in a concen-tration of about 15 mg/dl. It is an unstable protein that can split easily into smaller compounds, one of which is thrombin, which has a molecular weight of 33,700, almost exactly one half that of prothrombin.

Prothrombin is formed continually by the liver, and it is continually being used throughout the body for blood clotting. If the liver fails to produce prothrom-bin, in a day or so prothrombin concentration in the plasma falls too low to provide normal blood coagulation.

Vitamin K is required by the liver for normal for-mation of prothrombin as well as for formation of a few other clotting factors. Therefore, either lack of vitamin K or the presence of liver disease that pre-vents normal prothrombin formation can decrease the prothrombin level so low that a bleeding tendency results.