2 Ordering the Evaluation of Attributes

5 Semantic Rules with Controlled Side Effects

"Dependency graphs" are a useful tool for determining an evaluation order for the attribute instances in a given parse tree. While an annotated parse tree shows the values of attributes, a dependency graph helps us determine how those values can be computed.

In this section, in addition to dependency graphs, we define two impor-tant classes of SDD's: the "S-attributed" and the more general "L-attributed" SDD's. The translations specified by these two classes fit well with the parsing methods we have studied, and most translations encountered in practice can be written to conform to the requirements of at least one of these classes.

A dependency graph depicts the flow of information among the attribute in-stances in a particular parse tree; an edge from one attribute instance to an-other means that the value of the first is needed to compute the second. Edges express constraints implied by the semantic rules. In more detail:

For each parse-tree node, say a node labeled by grammar symbol X, the dependency graph has a node for each attribute associated with X.

Suppose that a semantic rule associated with a production p defines the value of synthesized attribute A.b in terms of the value of X.c (the rule

may define A.b in terms of other attributes in addition to X.c). Then, the dependency graph has an edge from X.c to A.b. More precisely, at every node N labeled A where production p is applied, create an edge to attribute b at N, from the attribute c at the child of N corresponding to this instance of the symbol X in the body of the production.2

Suppose that a semantic rule associated with a production p defines the value of inherited attribute B.c in terms of the value of X.a. Then, the dependency graph has an edge from X.a to B.c. For each node N labeled B that corresponds to an occurrence of this B in the body of production p, create an edge to attribute c at N from the attribute a at the node M that corresponds to this occurrence of X. Note that M could be either the parent or a sibling of N.

Since a node N can have several children labeled X, we again assume that subscripts distinguish among uses of the same symbol at different places in the production.

At every node N labeled E, with children corresponding to the body of this production, the synthesized attribute val at N is computed using the values of val at the two children, labeled E and T. Thus, a portion of the dependency graph for every parse tree in which this production is used looks like Fig. 5.6. As a convention, we shall show the parse tree edges as dotted lines, while the edges of the dependency graph are solid.

Nodes 1 and 2 represent the attribute lexval associated with the two leaves labeled digit . Nodes 3 and 4 represent the attribute val associated with the two nodes labeled F. The edges to node 3 from 1 and to node 4 from 2 result from the semantic rule that  defines F.val in terms of digit.lexval In fact,  F.val equals digit .lexval, but the edge represents dependence, not equality.

Nodes 5 and 6 represent the inherited attribute T'.inh associated with each of the occurrences of nonterminal T'. The edge to 5 from 3 is due to the rule T'.inh =  F.val,  which defines  T'.inh  at  the  right child of the  root  from  F.val at the left child.  We see edges to 6 from node 5 for T'.inh and from node 4 for F.val, because these values are multiplied to evaluate the attribute inh at node 6.

Finally, node 9 represents the attribute T.val. The edge to 9 from 8 is due to the semantic rule, T.val = T'.syn, associated with production 1.

2. Ordering the Evaluation of Attributes

If there is any cycle in the graph, then there are no topological sorts; that is, there is no way to evaluate the SDD on this parse tree. If there are no cycles, however, then there is always at least one topological sort. To see why, since there are no cycles, we can surely find a node with no edge entering. For if there were no such node, we could proceed from predecessor to predecessor until we came back to some node we had already seen, yielding a cycle. Make this node the first in the topological order, remove it from the dependency graph, and repeat the process on the remaining nodes.

As mentioned earlier, given an SDD, it is very hard to tell whether there exist any parse trees whose dependency graphs have cycles. In practice, translations can be implemented using classes of SDD's that guarantee an evaluation order, since they do not permit dependency graphs with cycles. Moreover, the two classes introduced in this section can be implemented efficiently in connection with top-down or bottom-up parsing.

The first class is defined as follows:

•      An SDD is  S-attributed if every attribute is synthesized.

S-attributed definitions can be implemented during bottom-up parsing, since a bottom-up parse corresponds to a postorder traversal. Specifically, postorder corresponds exactly to the order in which an LR parser reduces a production body to its head. This fact will be used in Section 5.4.2 to evaluate synthesized attributes and store them on the stack during LR parsing, without creating the tree nodes explicitly.

The second class of SDD's is called L-attributed definitions. The idea behind this class is that, between the attributes associated with a production body, dependency-graph edges can go from left to right, but not from right to left (hence "L-attributed"). More precisely, each attribute must be either

2. Inherited, but with the rules limited as follows. Suppose that there is a production A -> X1 X2 ....... Xn, and that there is an inherited attribute Xi.a computed by a rule associated with this production. Then the rule may use only:

Inherited attributes associated with the head A.

Either inherited or synthesized attributes associated with the occurrences of symbols X1, X2,... , X(i-1) located to the left of Xi.

Inherited or synthesized attributes associated with this occurrence of Xi itself, but only in such a way that there are no cycles in a dependency graph formed by the attributes of this X i .

Example 5.8 : The SDD in Fig. 5.4 is L-attributed. To see why, consider the semantic rules for inherited attributes, which are repeated here for convenience:

In each of these cases, the rules use information "from above or from the left," as required by the class. The remaining attributes are synthesized. Hence, the SDD is L-attributed. •

Example 5.9 : Any SDD containing the following production and rules cannot be L-attributed:

The first rule,  A.s = B.b,  is a legitimate rule in either an S-attributed or L-attributed SDD. It defines a synthesized attribute A.s in terms of an attribute at a child (that is, a symbol within the production body).

The second rule defines an inherited attribute B.i, so the entire SDD cannot be S-attributed. Further, although the rule is legal, the SDD cannot be L- attributed,  because     the attribute C.c is used to help  define B.i,  and C is to the right of B in the production body.  While attributes at siblings in a parse tree may be used in L-attributed SDD's, they must be to the left of the symbol whose attribute is being defined.

5. Semantic Rules with Controlled Side Effects

We shall control side effects in SDD's in one of the following ways:

Constrain the allowable evaluation orders, so that the same translation is produced for any allowable order. The constraints can be thought of as implicit edges added to the dependency graph.

As an example of an incidental side effect, let us modify the desk calculator of Example 5 . 1 to print a result. Instead of the rule L.val = E.val, which saves the result in the synthesized attribute L.val, consider:

Semantic rules that are executed for their side effects, such as print(E.val), will be treated as the definitions of dummy synthesized attributes associated with the head of the production. The modified SDD produces the same translation under any topological sort, since the print statement is executed at the end, after the result is computed into E.val.

Nonterminal D represents a declaration, which, from production 1, consists of a type T followed by a list L of identifiers. T has one attribute, T.type, which is the type in the declaration D. Nonterminal L also has one attribute, which we call ink to emphasize that it is an inherited attribute. The purpose of L.inh is to pass the declared type down the list of identifiers, so that it can be added to the appropriate symbol-table entries.

Productions 2 and 3 each evaluate the synthesized attribute T.type, giving it the appropriate value, integer or float. This type is passed to the attribute L.inh in the rule for production 1. Production 4 passes L.inh down the parse tree. That is, the value L1.inh is computed at a parse-tree node by copying the value of L.inh from the parent of that node; the parent corresponds to the head of the production.

Productions 4 and 5 also have a rule in which a function addType is called with two arguments:

id.entry, a lexical value that points to a symbol-table object, and

L.inh, the type being assigned to every identifier on the list.

We suppose that function  addType properly installs the type L.inh as the type of the represented identifier.

Nodes 1, 2, and 3 represent the attribute entry associated with each of the leaves labeled id. Nodes 6, 8, and 10 are the dummy attributes that represent the application of the function addType to a type and one of these entry values. 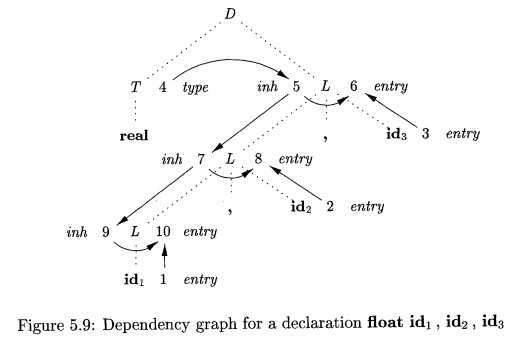 Node 4 represents the attribute T.type, and is actually where attribute eval-uation begins. This type is then passed to nodes 5, 7, and 9 representing L.inh associated with each of the occurrences of the nonterminal L.

Exercise 5.2.1 :  What are all the topological sorts for the dependency graph of Fig. 5.7?

Exercise 5 . 2 . 4: This grammar generates binary numbers with a "decimal" point:

Design an L-attributed SDD to compute S.val, the decimal-number value of an input string. For example, the translation of string 101 . 101 should be the decimal number 5.625. Hint: use an inherited attribute L.side that tells which side of the decimal point a bit is on.

Exercise 5 . 2 . 5 : Design an S-attributed SDD for the grammar and translation described in Exercise 5.2.4.

Exercise 5 . 2 . 6:  Implement Algorithm 3.23, which converts a regular expression into a nondeterministic finite automaton, by an L-attributed SDD on a top-down parsable grammar. Assume that there is a token char representing any character, and that char.lexval is the character it represents. You may also assume the existence of a function new() that returns a new state, that is, a state never before returned by this function. Use any convenient notation to specify the transitions of the NFA.