Eventually we will extend the basic algorithm to also handle parentheses, making it possible to evaluate expressions like

Because we are going to have to deal with inputs made up of many parts that have to be processed in an algorithm, the first step is to transform our input into a collection of objects that we can manipulate. If our input comes to us in the form of a String and the elements of the input are properly separated by spaces, we can start by using the String class's split() method to split the input String into an array of Strings.

This solves the problem of separating the input into individual elements we can manipulate. We are also going to go one step further, turning each of these elements into an object called a Token.

The basic algorithm for handling arithmetic expressions without parentheses makes use of a data structure called a stack. A stack is a container for a collection of data items. The data items are organized as a stack, with the first item to enter the container at the bottom and the last item at the top. When new items are added to the stack they are pushed onto the top of the stack. Items can only be removed from the stack by popping them off the top of the stack. For this algorithm the objects we are working with are Token objects, so we will need to construct a stack that can hold Tokens.

• If we encounter an operator token in the input and the operator stack is empty, we push the

operator token onto the operator stack.

operator at the top of the stack and then push the new operator token onto the operator stack.

• When we reach the end of the input, any operators that remain on the operator stack are processed and removed until the operator stack is empty. At that point, there should be only one number token left on the value stack: that number is the result of the evaluation.

Here is an illustration of this algorithm in action. The expression we want to compute is 2 + 3 * 4 - 6

At the start of the algorithm both stacks are empty and the tokens are lined up in the input. 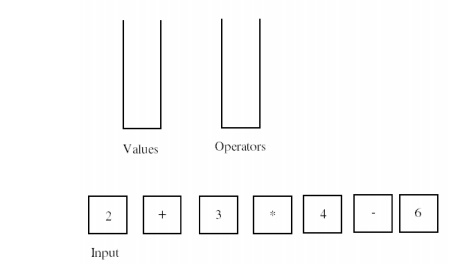 After handling the first three tokens we arrive at this configuration. 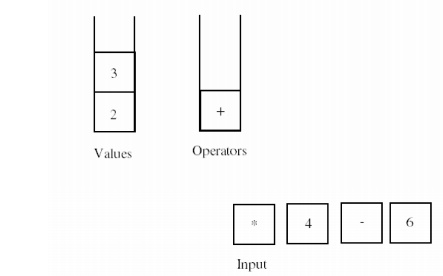 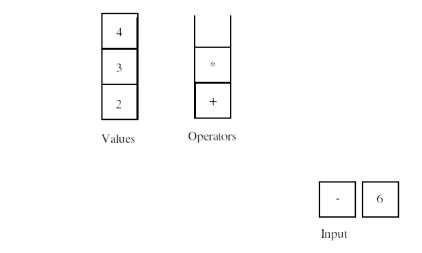 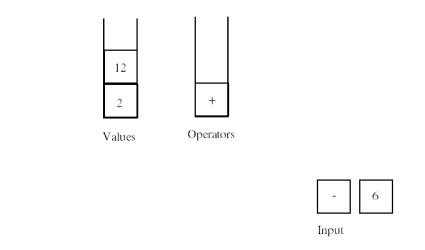 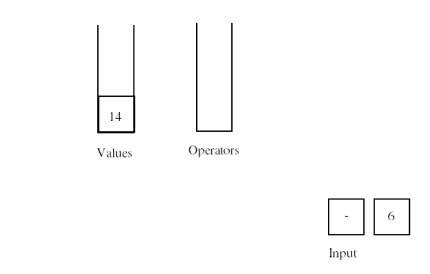 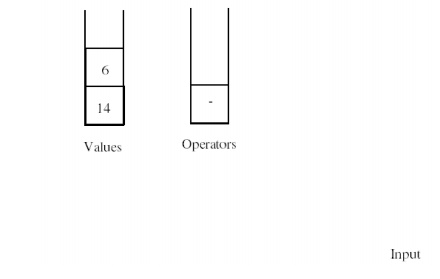 Once the input has emptied out, we process any operators that remain on the operator stack. Once all of those operators have been processed, the sole remaining number on the value stack is the result of the computation. 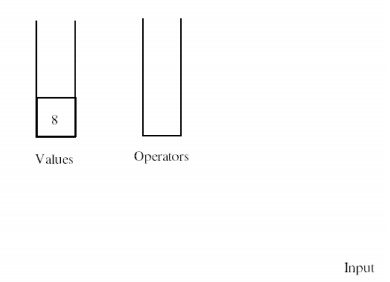 The algorithm outlined above can easily be extended to also handle parentheses correctly. All that is required is a couple of additional rules.

• When we encounter a left parentheses token in the input, we push that token on the operator stack.