Europe in the nineteenth century was influenced by the developments in France.

Europe in the nineteenth century was influenced by the developments in France. Klemens von Metternich, the Chancellor of Austria-Hungary, who formed a 'Holy Alliance' between the monarchies of Austria, Russia, Prussia and France to suppress democratic and nationalistic trends in Europe, famously said, “When France sneezes, Europe catches a cold.” France sneezed not once, but thrice in 1789, 1830 and 1848, when revolutions broke out in France. The French Revolution of 1789 led to the emergence of the idea of liberalism expressed through its famous slogan, ‘Liberty, Equality and Fraternity’. The revolutionary energies released and ideals fostered during the Era of Revolution were destroyed by Napoleon Bonaparte. For some years Napoleon’s reign was a career of victory. However, as he never won the command of the sea from the British, his fleets suffered a crushing defeat at the hands of the British in 1805. Spain rose against Napoleon in 1808 and then a British army under Wellington pushed the French armies out of the peninsula. In 1812 Napoleon invaded Russia with a great army of 600,000 men, but the French armies were beaten back. Napoleon abdicated (1814) and was exiled to Elba but returned to France for one last effort to seize power in 1815. He was defeated by the allied forces of British, Belgians and Prussians at Waterloo in Belgium. He was finally exiled to the remote island of St. Helena in the West Atlantic until his death in 1821. 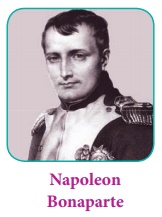 After the fall of Napoleon, an unstable peace lasted for nearly forty years. Two factors prepared the way for the outbreak of wars between 1854 and 1871. The first one was the restoration of monarchy and the unfair privileges abolished during the Revolution. On regaining their former position, forgetting past lessons, the rulers almost immediately aimed at absolute power once more. The second was the unworkable system of boundaries drawn by the diplomats at Congress of Vienna (1815), disregarding the principle of nationality. 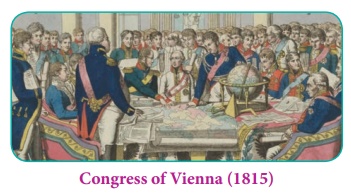 The reactionary monarchical forces under the leadership of Metternich had begun to function despotically through the Concert of Europe. There was repression of the liberation movements. Popular revolts in Naples (1820) and Spain (1822) were suppressed with the aid of foreign troops, Austrian in the case of former and French in the latter case. There was little liberty in any European country. In spite of this, the American and the French Revolutions had made the ideas of democracy and political liberty known and appreciated by liberal thinkers. Progressive thinkers and liberals believed in the virtues of democracy, and tried hard to achieve them. But democracy offered no solution to issues of poverty or class conflict. Europe in the nineteenth century was ‘a strange mixture of capitalism and imperialism and nationalism and internationalism and wealth and poverty’. 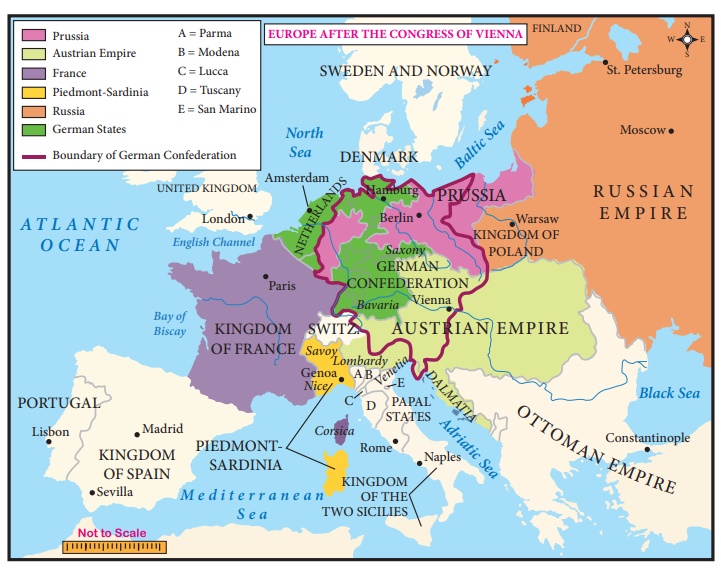 The Industrial Revolution ended the domestic system of industry and necessitated the workmen to live near the factories. Long rows of tenement houses were built for their accommodation. Wages were abominably low. Hours of labour were as high as fifteen or even eighteen a day. Women and children were employed in large numbers. The factories were owned by a small class of capitalists, whose main object was unbridled profit. The working classes were initially unorganised and therefore wholly at the mercy of their employers. Many, however, soon began to feel that without organisation and unity, no permanent improvement was possible. So they strove to establish trade unions. When trade unions arose, the government first declared these unions illegal. Many of the frontline leaders, as we have seen in the previous lesson, were imprisoned or banished. In 1824, however, labour unions were legalised. With the rise of trade unions, an alternate system to capitalism was conceived and socialism was used as a plank by many to attack the state and defend the interests of the working class. The working class organising into the Chartist Movement in England and later posing a serious challenge, as the Paris Commune did in France, to the capitalist order, and the unscrupulous measures adopted by the capitalists in connivance with the capitalist state to crush labour struggles are highlighted in this lesson.

Concert of Europe: Founded by major European Powers, Austria, Prussia, Russia and Britain, in the post-Napoleonicera, it worked for the  preservation of European order and balance of power. Under the pretext of political status quo, the great powers under the aegis of Concert of Europe intervened and imposed their collective will on states threatened by internal rebellion during the so-called Metternich Era (1815–1848).

Under Napoleon Italy had been reduced to three political divisions. This step towards unity was destroyed by the Congress of Vienna in 1815. Eight states were set up and the whole of Northern Italy was handed over to the German -speaking Austrians. Germany was organised into a confederation of thirty eight states, governed by a Diet presided over by Austria. But the cause of nationality was not lost either in Italy or Germany. Both Italy and Germany unified and emerged as nation states.