Etiology and Pathophysiology - Alcohol Use Disorders

Alcoholism is a complex, multifaceted disorder which has long been recognized to run in families.

Alcoholism is a complex, multifaceted disorder which has long been recognized to run in families. There is substantial evidence from twin research and adoption studies that a major genetic component is operative in the development of alcoholism. Nonetheless, the dis-order is etiologically complex, with a variety of other vulnerability factors. It has been estimated that there is a sevenfold risk of al-coholism in first-degree relatives of alcohol-dependent individuals, with male relatives of male alcohol-dependent individuals having the greatest risk for the disorder. However, the majority of alcohol-dependent individuals do not have a first-degree relative who is al-cohol dependent. This underscores the fact that the risk for alcohol dependence is also determined by environmental factors, which may interact in complex ways with genetics. In addition to study-ing genetic contributions to alcoholism, another approach to under-standing the etiology of alcoholism is to identify distinct subtypes of alcoholics. The best known of these typologies is the Type 1/Type 2 distinction developed by Cloninger and colleagues (1981) from studies of adopted sons of Swedish alcoholics (see Table 35.1).

Type 1 alcoholics are characterized by the late onset of prob-lem drinking, rapid development of behavioral tolerance to alco-hol, prominent guilt and anxiety related to drinking, and infrequent fighting and arrests when drinking. Cloninger also termed this 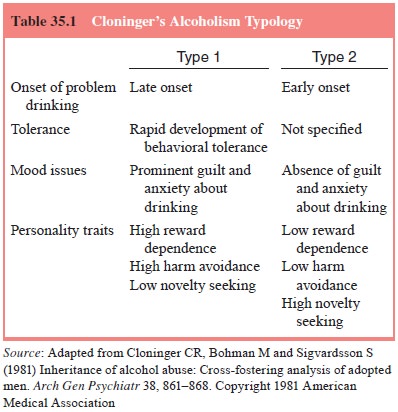 subtype “milieu-limited”, which emphasizes the etiologic role of environmental factors. In contrast, Type 2 alcoholics are character-ized by early onset of an inability to abstain from alcohol, frequent fighting and arrests when drinking, and the absence of guilt and fear concerning drinking. Cloninger postulated that transmission of alcoholism in Type 2 alcoholics was from fathers to sons, hence term the male-limited alcoholism. Differences in the two subtypes are thought to result from differences in three basic personality (i.e., temperament) traits, each of which has a unique neurochemi-cal and genetic substrate. Type 1 alcoholics are characterized by high reward dependence, high harm avoidance and low novelty seeking. In contrast, Type 2 alcoholics are characterized by high novelty seeking, low harm avoidance and low reward dependence.

Cloninger also hypothesized that specific neurotransmitter systems underlie personality structure. Specifically, dopamine is hypothesized to modulate novelty seeking, which is character-ized by frequent exploratory behavior and intensely pleasurable responses to novel stimuli. Serotonin is hypothesized to modulate harm avoidance, which is a tendency to respond intensely to aver-sive stimuli and their conditionedsignals.Finally,norepinephrineis hypothesized to modulate reward dependence or the resistance to extinction of previously rewarded behavior. Although Clonin-ger’s typology has generated substantial research, studies have failed to provide empirical support for this tridimensional per-sonality scheme and other aspects of the classification (Glenn and Nixon, 1991; Schuckit et al., 1990; Sannibale and Hall, 1998; Vaillant, 1994).

Implicit in the subtyping theories that have been developed to explain different clinical varieties of alcoholism is the notion that there are a variety of plausible etiological factors in addition to or mediated by genetic predisposition. Three such factors are pharmacological vulnerability, affective dysregulation and per-sonality disorder. The evidence for pharmacological vulnerabil-ity as an etiological factor is based on studies showing reduced sensitivity to the effects of alcohol in adult children of alcoholics (Schuckit and Smith, 1996; Pollock, 1992). Other evidence comes from research on the effects of the alcohol metabolizing enzymes aldehyde dehyrogenase and alcohol dehydrogenase pymor-phisms in individuals of Asian ancestry in which aversive reac-tions to the effects of alcohol are associated with reduced risk of alcohol dependence (Thomasson et al., 1993). A second etiologi-cal factor is affect dysregulation, which proposes that alcoholism is caused by repeated use of alcohol to “self-medicate” negative affective states such as anxiety and depression. This theory is supported by research indicating strong associations between al-cohol problems, mood disorders and life stress (Schuckit, 1985). The third etiological factor that has received considerable re-search support is deviance proneness or behavioral undercontrol, as indicated by hyperactivity, distractibility, sensation seeking, impulsivity, difficult temperament and conduct disorder. These conditions are hypothesized to contribute to school failure and association with deviant peers, which then provide a context for heavy drinking and drug use (Sher and Trull, 1994).

In summary, despite considerable progress in the identifi-cation of risk factors for alcoholism, the interactions among ge-netic, familial, psychological, interpersonal and environmental influences remain so complex that there is little consensus about etiology at this time.