Although mutual help societies composed of recovering alcohol-ics are not considered a formal treatment, they are often used as a substitute, an alternative and an adjunct to able value in some individuals.

Although mutual help societies composed of recovering alcohol-ics are not considered a formal treatment, they are often used as a substitute, an alternative and an adjunct to able value in some individuals. Further research is required with naltrexone to determine the optimal dosage, duration of treatment and psychosocial treatment strategies with which to use the medi-cation. The question of whether the medication is most efficacious for alcoholics with high levels of craving for alcohol remains an important one. The SSRIs fluoxetine, citalopram and sertraline may be of value in subgroups of heavy drinkers, particularly those with a later onset of problem drinking. In contrast, ondansetron may be useful in alcoholics with an early onset of problem drink-ing.

With an estimated 87 000 groups in 150 countries, AA is by far the most widely utilized source of help for drinking prob-lems in the USA and throughout the world. In addition, a number of self-help organizations have modeled themselves after AA, basing recovery from drug abuse, overeating, and other behav-ioral disorders on the 12 Steps of AA (see Table 35.4). Unfor-tunately, clinicians often refer patients to self-help groups such as AA without consideration of the patient’s needs and without adequate monitoring of the patient’s response. Not all people are willing to endorse the AA emphasis on spirituality and its dis-ease concept of alcoholism, which requires lifelong abstinence as the only means to recovery. Greater familiarity with AA may help clinicians to identify those patients who might benefit from this approach.

Although it is regarded as one of the most useful resources for recovering alcoholics, the research literature supporting the efficacy of AA is limited. Attendance at AA tends to be corre-lated with long-term abstinence, but this may reflect motivation for recovery. The type of motivated alcoholic that persists with AA might do just as well with other forms of supportive therapy. In fact, the few random assignment studies that have been con-ducted (Walsh et al., 1991) do not indicate that AA (or similar programs) is more effective than other types of treatment.

Infrequent attempts have been made to assess the efficacy of AA using controlled research designs because of methodologi-cal challenges, such as self-selection and ethical concerns about random assignment to treatment conditions. Nevertheless, sev-eral large-scale, well designed studies (Project MATCH Research Group, 1997, 1998) suggest that AA can have an incremental ef-fect when combined with formal treatment, and AA attendance alone may be better than no intervention.

A study of long-term outcomes of treated and untreated alcoholics (Timko et al., 2000) indicates that individuals who ob-tain help for a drinking problem, especially in a timely manner, have better outcomes over 8 years than those who do not receive help, but the type of help they receive (e.g., self-help or formal treatment) makes little difference in long-term outcomes. 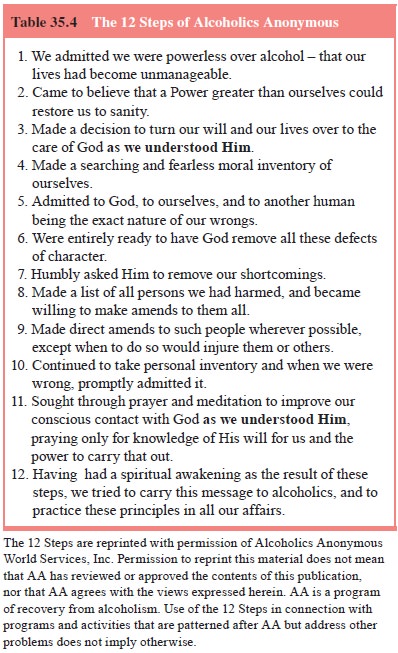