A specific cause for eating disorders is unknown. Initially, dieting may be the stimulus that leads to their development.

A specific cause for eating disorders is unknown. Initially, dieting may be the stimulus that leads to their development. Biologic vulnerability, developmental problems, and family and social influences can turn dieting into an eating disor-der (Table 18.1). Psychologic and physiologic reinforcement of maladaptive eating behavior sustains the cycle (Anderson & Yager, 2005).

Studies of anorexia nervosa and bulimia nervosa have shown that these disorders tend to run in families. Genetic vulnerability also might result from a particular personal-ity type or a general susceptibility to psychiatric disorders. Or it may directly involve a dysfunction of the hypothala-mus. A family history of mood or anxiety disorders (e.g., obsessive–compulsive disorder) places a person at risk for an eating disorder (Anderson & Yager, 2005).

Increased levels of the neurotransmitter serotonin and its precursor tryptophan have been linked with increased satiety. Low levels of serotonin as well as low platelet levels of monoamine oxidase have been found in clients with bulimia and the binge and purge subtype of anorexia ner-vosa (Anderson & Yager, 2005); this may explain binging behavior. The positive response of some clients with buli-mia to treatment with selective serotonin reuptake inhibi-tor antidepressants supports the idea that serotonin levels at the synapse may be low in these client 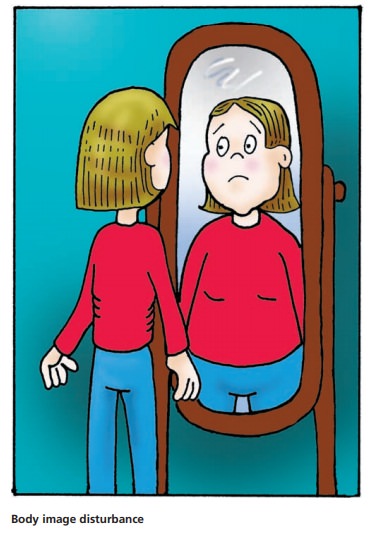 Two essential tasks of adolescence are the struggle to develop autonomy and the establishment of a unique iden-tity. Autonomy, or exerting control over oneself and the environment, may be difficult in families that are overpro-tective or in which enmeshment (lack of clear role bound-aries) exists. Such families do not support members’ efforts to gain independence, and teenagers may feel as though they have little or no control over their lives. They begin to control their eating through severe dieting and thus gain control over their weight. Losing weight becomes reinforc-ing: by continuing to lose, these clients exert control over one aspect of their lives.

It is important to identify potential risk factors for developing eating disorders so that prevention programs can target those at greatest risk. Adolescent girls who express body dissatisfaction are most likely to experience adverse outcomes, such as emotional eating, binge eating, abnormal attitudes about eating and weight, low self-esteem, stress, and depression. Characteristics of those who developed an eating disorder included disturbed eat-ing habits; disturbed attitudes toward food; eating in secret; preoccupation with food, eating, shape, or weight; fear of losing control over eating; and wanting to have a completely empty stomach (Cave, 2009).

The need to develop a unique identity, or a sense of who one is as a person, is another essential task of adolescence. It coincides with the onset of puberty, which initiates many emotional and physiologic changes. Self-doubt and confu-sion can result if the adolescent does not measure up to the person she or he wants to be.

Advertisements, magazines, and movies that feature thin models reinforce the cultural belief that slimness is attractive. Excessive dieting and weight loss may be the way an adolescent chooses to achieve this ideal. Body image is how a person perceives his or her body, that is, a mental self-image. For most people, body image is consis-tent with how others view them. For people with anorexia nervosa, however, body image differs greatly from the per-ception of others. They perceive themselves as fat, unattractive, and undesirable even when they are severely underweight and malnourished. Body image disturbance occurs when there is an extreme discrepancy between one’s body image and the perceptions of others and extreme dissatisfaction with one’s body image.

Self-perceptions of the body can influence the devel-opment of identity in adolescence greatly and often per-sist into adulthood. Self-perceptions that include being overweight lead to the belief that dieting is necessary before one can be happy or satisfied. Clients with bulimia nervosa report dissatisfaction with their bodies as well as the belief that they are fat, unattractive, and undesirable. The binging and purging cycle of bulimia can begin at any time—after dieting has been unsuccessful, before the severe dieting begins, or at the same time as part of a “weight loss plan.”

Girls growing up amid family problems and abuse are at higher risk for both anorexia and bulimia. Disordered eating is a common response to family discord. Girls growing up in families without emotional support often try to escape their

negative emotions. They place an intense focus outward on something concrete: physical appearance. Disordered eating becomes a distraction from emotions.

Childhood adversity has been identified as a significant risk factor in the development of problems with eating or weight in adolescence or early adulthood. Adversity is defined as physical neglect, sexual abuse, or parental mal-treatment that includes little care, affection, and empathy as well as excessive paternal control, unfriendliness, or overprotectiveness.

In the United States and other Western countries, the media fuels the image of the “ideal woman” as thin. The culture equates beauty, desirability, and, ultimately, hap-piness with being very thin, perfectly toned, and physi-cally fit. Adolescents often idealize actresses and models as having the perfect “look” or body even though many of these celebrities are underweight or use special effects to appear thinner than they are. Books, magazines, dietary supplements, exercise equipment, plastic surgery advertisements, and weight loss programs abound; the dieting industry is a billion-dollar business. The culture considers being overweight a sign of laziness, lack of self-control, or indifference; it equates pursuit of the “perfect” body with beauty, desirability, success, and will power. Thus, many women speak of being “good” when they stick to their diet and “bad” when they eat desserts or snacks.

Pressure from others also may contribute to eating dis-orders. Pressure from coaches, parents, and peers and the emphasis placed on body form in sports such as gymnas-tics, ballet, and wrestling can promote eating disorders in athletes. Parental concern over a girl’s weight and teasing from parents or peers reinforces a girl’s body dissatisfac-tion and her need to diet or control eating in some way. Studies in the United States and Europe conclude that bul-lying and peer harassment are also related to an increase in disordered eating habits (Eisenberg & Neumark-Sztainer, 2008; Sweetingham & Walter, 2008).