Anorexia nervosa is a life-threatening eating disorder characterized by the client’s refusal or inability to maintain a minimally normal body weight, intense fear of gaining weight or becoming fat.

Anorexia nervosa is a life-threatening eating disorder characterized by the client’s refusal or inability to maintain a minimally normal body weight, intense fear of gaining weight or becoming fat, significantly disturbed perception of the shape or size of the body, and steadfast inability or refusal to acknowledge the seriousness of the problem or even that one exists (APA, 2000). Clients with anorexia have a body weight that is 85% or less of that expected for their age and height, have experienced amenorrhea for at least three consecutive cycles, and have a preoccupation with food and food-related activities.

Clients with anorexia nervosa can be classified into two subgroups depending on how they control their weight. Clients with the restricting subtype lose weight primarily through dieting, fasting, or excessive exercising. Those with the binge eating and purging subtype engage regu-larly in binge eating followed by purging. Binge eating means consuming a large amount of food (far greater than most people eat at one time) in a discrete period of usually 2 hours or less. Purging involves compensatory behaviors designed to eliminate food by means of self-induced vom-iting or misuse of laxatives, enemas, and diuretics. Some clients with anorexia do not binge but still engage in purg-ing behaviors after ingesting small amounts of food.

Clients with anorexia become totally absorbed in their quest for weight loss and thinness. The term anorexia is actually a misnomer: These clients do not lose their appe-tites. They still experience hunger but ignore it and signs of physical weakness and fatigue; they often believe that if they eat anything, they will not be able to stop eating and will become fat. Clients with anorexia often are preoccu-pied with food-related activities such as grocery shopping, collecting recipes or cookbooks, counting calories, creat-ing fat-free meals, and cooking family meals. They also may engage in unusual or ritualistic food behaviors such as refusing to eat around others, cutting food into minute pieces, or not allowing the food they eat to touch their lips. These behaviors increase their sense of control. Excessive exercise is common; it may occupy several hours a day.

Bulimia nervosa, often simply called bulimia, is an eat-ing disorder characterized by recurrent episodes (at least twice a week for 3 months) of binge eating followed by inappropriate compensatory behaviors to avoid weight gain, such as purging, fasting, or excessively exercising (APA, 2000). The amount of food consumed during a binge episode is much larger than a person would normally eat. The client often engages in binge eating secretly. Between binges, the client may eat low-calorie foods or fast. Binging or purging episodes are often pre-cipitated by strong emotions and followed by guilt, remorse, shame, or self-contempt.

The weight of clients with bulimia usually is in the nor-mal range, although some clients are overweight or under-weight. Recurrent vomiting destroys tooth enamel, and incidence of dental caries and ragged or chipped teeth increases in these clients. Dentists are often the first health care professionals to identify clients with bulimia.

Related eating disorders usually first diagnosed in infancy and childhood include rumination disorder, pica, and feeding disorder . Common elements in clients with these disorders are family dysfunction and parent–child conflicts.

Binge eating disorder is listed as a research category in the DSM-IV-TR (APA, 2000); it is being investigated to deter-mine its classification as a mental disorder. The essential features are recurrent episodes of binge eating; no regular use of inappropriate compensatory behaviors, such as purg-ing or excessive exercise or abuse of laxatives; guilt, shame, and disgust about eating behaviors; and marked psycho-logic distress. Binge eating disorder frequently affects people over age 35, and it occurs often in men (Yager, 2008). Indi-viduals are more likely to be overweight or obese, over-weight as children, and teased about their weight at an early age. Thirty-five percent reported that binge eating preceded dieting; 65% reported dieting before binge eating.

Night eating syndrome is characterized by morning anorexia, evening hyperphagia (consuming 50% of daily calories after the last evening meal), and nighttime awak-enings (at least once a night) to consume snacks. It is asso-ciated with life stress, low self-esteem, anxiety, depression, and adverse reactions to weight loss. Most people with night eating syndrome are obese (Stunkard, Allison, & Lundgren, 2008). Treatment with SSRI antidepressants has shown positive effects.

Comorbid psychiatric disorders are common in clients with anorexia nervosa and bulimia nervosa. Mood disor-ders, anxiety disorders, and substance abuse/dependence are frequently seen in clients with eating disorders. Of those, depression and obsessive–compulsive disorder are most common (Anderson & Yager, 2005). Anorexia and bulimia are both characterized by perfectionism, obsessive–compulsiveness, neuroticism, negative emo-tionality, harm avoidance, low self-directedness, low cooperativeness, and traits associated with avoidant per-sonality disorder. In addition, clients with bulimia may also exhibit high impulsivity, sensation seeking, novelty seeking, and traits associated with borderline personality disorder (Thompson, 2009). Eating disorders often are linked to a history of sexual abuse, especially if the abuse occurred before puberty (Pike et al., 2008). Such a history may be a factor contributing to problems with intimacy, sexual attractiveness, and low interest in sexual activity. Clients with eating disorders and a history of sexual abuse also have higher levels of depression and anxiety, lower self-esteem, more interpersonal problems, and more severe obsessive–compulsive symptoms (Carter et al., 2006). Whether sexual abuse has a cause-and- effect relationship with the development of eating disorders, however, remains unclear. 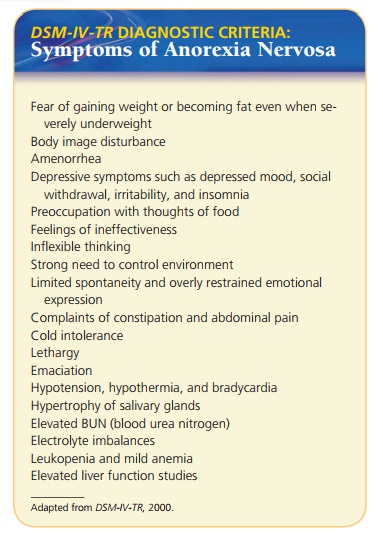