Ethical Behavior and its Relationship to the Professional Attitude

The term professional derives from medieval times, when scholastics were expected to “profess” their belief in a doctrine.

Ethical Behavior and its Relationship to the Professional Attitude

The term professional derives from medieval times, when scholastics were expected to “profess” their belief in a doctrine (Dyer, 1988, p. 17). In modern times, a professional is expected to be a learned person who has acquired special knowledge of a subject that is of vital importance for the welfare of the community. Having expertise is not enough, however. A professional is also obliged to adhere to certain societal responsibilities that are founded upon a code of ethical behavior and an attitude of service to those in need. A professional commitment to ethical behavior and service must take precedence over monetary compensation (Dyer, 1988, p. 16). All physicians, including psychiatrists, are bound by such a cove-nant – a sacred vow to place patient well-being before other consid-erations (Webb, 1986). In Western medical tradition, this obligation primarily derives from the teachings of Hippocrates in the 5th cen-tury BC. Hippocrates’ Oath is the predominant pledge recited at the graduation exercises at American medical schools (Dickstein et al., 1991), and contains three of the six core principles of modern medi-cal ethics: beneficence, nonmalfeasance, and confidentiality:

I will follow that system of regimen which according to my ability and judgment, I consider for the benefit of my patients, and abstain from whatever is deleterious and mischievous…. With purity and holiness I will pass my life and practice my Art…. Into whatever houses I enter, I will go into them for the benefit of the sick, and will abstain from every voluntary act of mischief and corruption; and, further, from the seduction of females or males, of freemen and slaves. Whatever, in connection with my professional practice or not, in connection with it, I see or hear, in the life of men, which ought not to be spoken of abroad, I will not divulge, as reckoning that all such should be kept secret (Hippocrates, 1929). 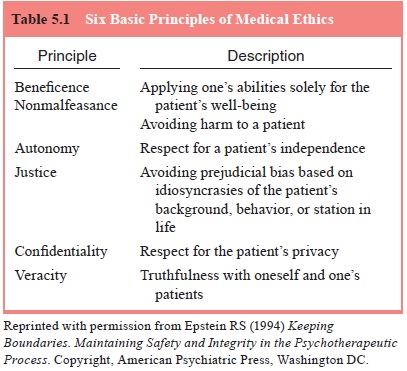 The other three general principles of medical ethics include autonomy, justice and veracity (see Table 5.1 for a description and summary of all six ethical principles; Epstein 1994, p. 20). The American Psychiatric Association (APA) (1973) adopted the Amer-ican Medical Association’s (AMA) Principles of Medical Ethics, publishing it along with special annotations applicable for psychi-atric practice. The APA has produced six revisions of these annota-tions. The seven sections of the AMA principles are summarized in Table 5.2. Table 5.3 summarizes some of the salient ethical annota-tions for psychiatrists (American Psychiatric Association, 1993). 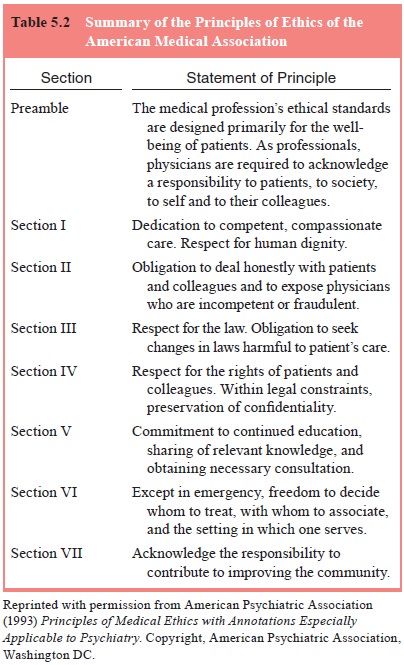 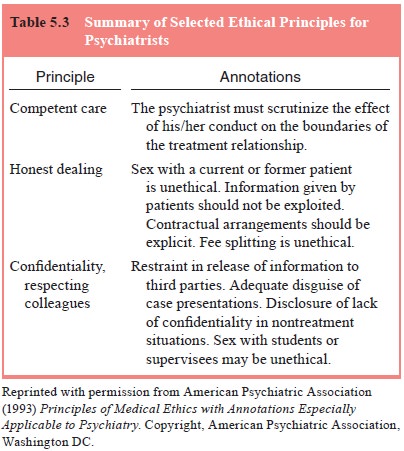 The World Psychiatric Association (World Psychiatric As-sociation [WPA] 1999–2002; World Psychiatric Association Ethi-cal Statements, 2000) developed and approved ethical guidelines, starting with the Declaration of Hawaii in 1977, galvanized by concerns about the abuse of psychiatry. A long process of inves-tigation within the domain of professional ethics provided the foundation for the Declaration of Madrid that was endorsed by the General Assembly of the WPA in 1996. In its final form, the Dec-laration of Madrid included seven general guidelines that focused on the aims of psychiatry. They are summarized as follows:

·   Psychiatry’s concern should be to provide the best treatment and rehabilitation for persons with mental disorders, consist-ent with scientific knowledge, ethical principles, and with the least possible restriction on the freedom of the patient.

·   Psychiatrists have a duty to keep abreast of scientific devel-opments. Psychiatrists trained in research should seek to ad-vance the frontiers of knowledge.

·           Psychiatrists should consult with families of incapacitated pa-tients to safeguard the human dignity and the legal rights of the patient. Treatment should not be given against the patient’s will, unless withholding treatment would endanger the life of the patient or others. Treatment must always be in the best interest of the patient.

·   Psychiatrists performing assessments, especially when re-tained by a third party, have a duty to inform the person being examined about the purpose of the intervention, the use of the findings, and the possible repercussions of the assessment.

·   It is unethical to conduct research that is not in accordance with the canons of science. Research activities should be approved by an appropriate and ethically constituted oversight commit-tee. Because of the vulnerability of psychiatric patients, ex-tra caution and strict ethical standards should be employed to safeguard patients’ autonomy, patients’ mental and physical integrity, and the selection of population groups.

The physician’s role, first and foremost, is to promote health, re-duce suffering, and protect life. The psychiatrist, whose patients may include those who are severely incapacitated or incompetent to reach an informal decision, should be particularly careful about actions that could lead to the death of individuals who cannot protect themselves because of disability, and should be vigilant to the possibility that a patient’s views could be distorted by mental illness such as depression. In such situations, the psychiatrist’s role is to treat the illness.

It is unethical for a psychiatrist to participate in decisions to terminate pregnancy for the purpose of sex selection.

Psychiatrists should seek to protect their patients and help them exercise self-determination to the fullest extent possible. The role of the psychiatrist is to clarify the issues surrounding organ do-nations and to deal with the religious, cultural, social and family factors to ensure that informed and proper decisions be made by all concerned.

WPA Guidelines on Genetic Research and Counseling in Psychiatric Patients

Psychiatrists participating in genetic research should be mindful that the ramifications of genetic information are not limited to the individual subject or patient but can lead to far-reaching repercussions and consequences that can have a negative and dis-ruptive effect on the larger family or community. Psychiatrists are ethically obligated to observe proper practice, avoid the risks associated with premature disclosure, misinterpretations, or mis-use of genetic information, and should never advise a pregnant woman with mental disorders to get an abortion based on the medical or genetic basis of her mental illness. They should not re-fer patients to genetic testing unless there are satisfactory levels of quality assurance and adequate genetic counseling available to the patient.

Further guidelines on the relationship between psychia-trists and the media, ethnic discrimination, ethnic cleansing, and genetic research and counseling were endorsed by the WPA General Assembly in 1999.

The Madrid Declaration defines ethnic discrimination as basi-cally racist, as it fails to accept diversity and humanity’s common heritage. In its most malignant form, ethnic cleansing is a crime against humanity. In this regard, psychiatrists should not discrim-inate nor help to discriminate against patients on ethnic grounds, nor be involved in any activity that promotes ethnic cleansing.

It is important that psychiatrists use the media in an affirmative way for a variety of goals that promote good mental health care, such as advocating for the destigmatization of mental disorder and mental patients. In all their interactions with the media, psychiatrists are obliged to advocate for the mentally ill and to maintain the dignity of the profession. Psychiatrists should be mindful of the effect of their statements on the public perception of the profession and patients, and abstain from making state-ments or undertaking public activities that may be demeaning to either. Patients’ confidentiality should be maintained, and the sensationalization of mental illness should be avoided. Regarding the disclosure of research findings, psychiatrists should be cau-tious to report only results that are generally accepted by experts, and to convey the presentation of such results in a way that serves patients’ welfare and dignity.