Psychiatric treatment cannot be conducted without doctor and patient entering into each other’s space, just as it is impossible to perform a bloodless laparotomy.

Psychiatric treatment cannot be conducted without doctor and patient entering into each other’s space, just as it is impossible to perform a bloodless laparotomy. Gutheil and Gabbard (1993) termed such incursions occurring during the therapeutic proc-ess boundary crossings. They defined boundary violations as boundary crossings that cause injury to the patient. However, it is not always easy to be sure of the consequences of such a “crossing”, since harmful effects may be delayed or concealed. Many patients are unable to articulate their sense of injury be-cause the psychiatrist’s aberrant behavior may appear so similar to exploitation they have experienced in previous pathological relationships. For example, patients who were sexually abused in childhood are more likely to acquiesce to an amorous ad-vance by a psychiatrist and to avoid complaining about feeling used, because they fear the threat of the psychiatrist’s rejection and retaliation. Certain nonsexual boundary crossings such as conflicts of interest might seem harmless on the surface but can interfere with patients’ ability to feel safe in their psychiatrist’s care and will diminish their chances for optimal recovery. In this context, a boundary violation can be defined as any in-fringement that interferes with the primary goal of providing care or causes harm to the patient, the therapist, or the therapy itself (Epstein, 1994, p. 2).

Prior to the 1970s, open discussion on the topic of psy-chiatrist–patient sex was virtually taboo and considered “too hot to handle” as a subject for publication in scientific journals (Dahlberg, 1970). Professional societies demonstrated an incon-sistent and ambiguous attitude of “amused tolerance” (Pope and Bouhoutsos, 1986, p. 161) towards mental health practitioners en-gaging in sexual behavior with their patients.

The public has become increasingly interested in the subject of psychiatric boundary violations in the past 25 years, particularly those involving sexual exploitation. State licensing boards, professional ethics committees and civil juries are much more likely to mete out strong sanctions against violators than ever before. These attitudinal changes have taken place in spite of the fact that popular movies continue to romanticize the idea of psychiatrist–patient sexuality, and almost always seem oblivi-ous to the horrendous feelings of shame, betrayal and devastation that patients experience when these things happen to them in real life.

The public’s intolerance of sexual involvement between psychiatrists and patients has resulted in part from the increasing empowerment of the victims of incest, rape and spousal abuse, and a better understanding of the psychological sequelae that fol-low mental trauma such as post traumatic stress disorder (PTSD). In addition, psychiatric patients have become more willing to ex-pose unethical or exploitative behavior on the part of clinicians, particularly when it involves sexual activity. This trend has been augmented by the fact that courts and professional licensing bod-ies are now more inclined to render sanctions for injuries that are solely psychological in nature.

Quantitative estimates of the frequency of sexual boundary violations among mental health professionals derive from survey studies conducted over the last 20 years (Pope and Bouhoutsos, 1986; Kardener et al., 1973; Perry, 1976; Holroyd and Brodsky, 1977; Gartrell et al., 1986; Borys and Pope, 1989; Schoener, 1990). A review of these studies shows that from 5.5 to 13.7% of male mental health clinicians admitted to engaging in sexual activity with patients. Epstein (1994, pp. 207–208) calculated a crude weighted average from Schoener’s (1990) comprehensive review of survey studies reporting frequency of sexual viola-tions by clinicians’ gender. From ten studies involving a total of 5 816 respondents (excluding a large survey of nurses), an aver-age of 7.4% of male and 2.3% of female clinicians admitted to engaging in sexual behavior with patients. These data suggest that male clinicians are about three times more likely to admit they have become sexually involved with patients. Although more recent studies suggest that sexual exploitation by mental health practitioners might be occurring less frequently, increas-ing media reports of severe sanctions taken against offending therapists have probably diminished the validity of self-report questionnaires.

Studies of nonsexual violations suggest that many mental health clinicians still have serious problems maintaining profes-sional boundaries with patients (Borys and Pope, 1989; Epstein et al., 1992). Epstein and colleagues (1992) queried 532 psychia-trists practicing in the USA about their behavior with patients within a prior 2-year period, using the Exploitation Index (EI) developed by Epstein and Simon (1990). They found that 19% of respondents reported engaging in a personal relationship with patients after treatment was terminated, 17% told patients personal details of their life in order to impress them, and 17% joined in activities with patients to deceive a third party such as an insurance company (see Table 5.5, reviewing the frequency of nonsexual boundary violations among respondents in this study). Xiangyi and Tiebang (2001) surveyed mental health clinicians in China using a Chinese translation of the EI. They found a rate of endorsement of boundary violations that was similar to the findings in the US study, although there were distinct variations in the pattern of certain responses that the authors attributed to cultural differences between the two populations. 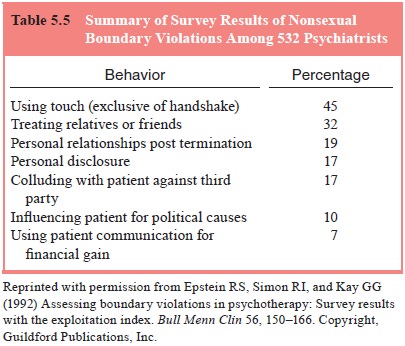 Simon (1989) emphasized that when clinicians engage in nonsexual infringements of the treatment relationship, it is often a prelude to subsequent sexual behavior. Sexual involve-ment with patients often starts with excessive personal disclo-sure, accepting and giving gifts, requesting favors, and meeting patients outside of the office setting. Like a seduction, the be-havior escalates over time until it culminates in sexual contact (Simon, 1989).

Regardless of the specific type of infringement involved, there are common elements to all boundary violations. Peterson (1992) argued that such activity emanated from a disturbed and disconnected relationship. She suggested four basic behavioral themes in this regard, including efforts on the part of the clinician to reverse roles with the patient, to intimidate the patient to main-tain secrecy, to place the patient in a double bind, and to indulge professional privilege. Indulgence of privilege is often accompa-nied by a sense of entitlement on the clinician’s part, such that he/she regards the patient as a wholly owned subsidiary.

Epstein (1994, pp. 89–110) outlined the progression of boundary violations as they originate from dysregulation in the clinician’s personal ego boundaries. Circumstances impairing the clinician’s ability to cope with patients and their problems may include deficient knowledge, general stress, mental disor-der, or a treatment-induced regression. These factors may lead the clinician to employ maladaptive intrapsychic or behavio-ral coping mechanisms that manifest in the form of therapeu-tic boundary violations. Other general factors common to all boundary violations include a slippage of the original purpose of the treatment (Epstein, 1994, pp. 97–98), pseudoeclecticism (Epstein and Janowsky, 1969), a narcissistic sense of special-ness (Epstein, 1994, pp. 107–110; Epstein and Simon, 1990), and efforts to deprofessionalize the relationship by fostering an atmosphere of “pseudoequality” between clinician and patient (Peterson, 1992).

The double-binding messages that exploitive clinicians employ often represent a way for them to project their own dis-avowed feelings of shame and inadequacy onto vulnerable pa-tients. For example, a therapist may deceive a patient suffering from low self-esteem and sexual dysfunction by encouraging her to have sex with him. He may rationalize:

You have told me that you feel unattractive and inadequate as a woman. Since therapy is supposed to help you with your prob-lems, I will help show you how attractive and effective you are as a woman by having sex with you.

Psychotherapy and erotic behavior can both be construed as subcategories of the superordinate class of “activities that help people feel better” (Epstein, 1994, p. 102). In the example cited above, the exploitive therapist blurs the logical boundaries be-tween the two subcategories and fails to inform the patient that sexual behavior with him is likely to be harmful to her. Blurring of logical categories is an essential aspect of double-binding mes-sages. Patients who are subjected to such reasoning are often in a dependent and cognitively regressed state and are unable to understand the logical absurdity of the double bind. They fear that if they refuse to comply with the therapist’s suggestions, they will be rejected for failing to cooperate with the therapist.

It is important to place the burgeoning literature on bound-ary violations in its social context. An aroused public has been exposed to recurring reports of psychiatrists and other mental health professionals, who have been disciplined or sued for be-havior such as sexual involvement with patients and spouses of patients; using information learned in patients’ psychotherapy sessions to gain inside data on financial investments; and ac-cepting large bequests from elderly patients. Each new scandal serves to erode society’s trust in the integrity of psychiatry as a profession and makes it more difficult for the mentally ill to obtain needed treatment. Compounding this problem is the fact that some of these well-publicized reports of boundary violations involved highly trained psychiatrists who were leaders in their field and who served as important role models for students in professional training.

As has occurred many times before in history, societal changes tend to overshoot the mark, leading some observers to caution against an hysterical “witch hunt” against suspected of-fenders. Slovenko (1991) cautioned that the current climate has become ripe for an increasing number of false accusations to be made against innocent clinicians. Gutheil (1992) has documented such cases and provided guidelines for proper forensic psychiatric evaluation following allegations of sexual misconduct.