A function point is a unit of measurement to express the amount of business functionality an information system (as a product) provides to a user.

A function point is a unit of measurement to express the amount of business functionality an information system (as a product) provides to a user. Function points measure software size. The cost (in dollars or hours) of a single unit is calculated from past projects

·        The risk of "inflation" of the created lines of code, and thus reducing the value of the measurement system, if developers are incentivized to be more productive. FP advocates refer to this as measuring the size of the solution instead of the size of the problem.

·        Lines of Code (LOC) measures reward low level languages because more lines of code are needed to deliver a similar amount of functionality to a higher level language. C. Jones offers a method of correcting this in his work.

·        LOC measures are not useful during early project phases where estimating the number of lines of code that will be delivered is challenging. However, Function Points can be derived from requirements and therefore are useful in methods such as estimation by proxy.

Source lines of code (SLOC), also known as lines of code (LOC), is a software metric used to measure the size of a computer program by counting the number of lines in the text of the program's source code. SLOC is typically used to predict the amount of effort that will be required to develop a program, as well as to estimate programming productivity or maintainability once the software is produced

SLOC measures are somewhat controversial, particularly in the way that they are sometimes misused. Experiments have repeatedly confirmed that effort is highly correlated with SLOC, that is, programs with larger SLOC values take more time to develop. Thus, SLOC can be very effective in estimating effort. However, functionality is less well correlated with SLOC: skilled developers may be able to develop the same functionality with far less code, so one program with fewer SLOC may exhibit more functionality than another similar program. In particular, SLOC is a poor productivity measure of individuals, since a developer can develop only a few lines and yet be far more productive in terms of functionality than a developer who ends up creating more lines (and generally spending more effort). Good developers may merge multiple code modules into a single module, improving the system yet appearing to have negative productivity because they remove code. Also, especially skilled developers tend to be assigned the most difficult tasks, and thus may sometimes appear less "productive" than other developers on a task by this measure. Furthermore, inexperienced developers often resort to code duplication, which is highly discouraged as it is more bug-prone and costly to maintain, but it results in higher SLOC.

The act of choosing between manufacturing a product in-house or purchasing it from an external supplier.

In a make-or-buy decision, the two most important factors to consider are cost and availability of production capacity.

An enterprise may decide to purchase the product rather than producing it, if is cheaper to buy than make or if it does not have sufficient production capacity to produce it in-house. With the phenomenal surge in global outsourcing over the past decades, the make-or-buy decision is one that managers have to grapple with very frequently.

Factors that may influence a firm's decision to buy a part rather than produce it internally include lack of in-house expertise, small volume requirements, desire for multiple sourcing, and the fact that the item may not be critical to its strategy. Similarly, factors that may tilt a firm towards making an item in-house include existing idle production capacity, better quality control or proprietary technology that needs to be protected.

COnstructive COst MOdel II (COCOMO® II) is a model that allows one to estimat e the cost, effort, and schedule when planning a new software development activity. COCOMO® II is the latest major extension to the original COCOMO® ( COCOMO® 81 ) model published in 1981. It consists of three submodels, each one offering increased fidelity the further along one is in the project planning and design process. Listed in increasing fidelity, these submodels are called the Applications Composition, Early Design, and Post-architecture models.

COCOMO® II can be used for the following major decision situations

·        Deciding which parts of a software system to develop, reuse, lease, or purchase

·        Deciding how to implement a process improvement strategy, such as that provided in the SEI

The original COCOMO® model was first published by Dr. Barry Boehm in 1981, and reflected the software development practices of the day. In the ensuing decade and a half, software development techniques changed dramatically. These changes included a move away from mainframe overnight batch processing to desktop-based real-time turnaround; a greatly increased emphasis on reusing existing software and building new systems using off-the-shelf software components; and spending as much effort to design and manage the software development process as was once spent creating the software product.

These changes and others began to make applying the original COCOMO® model problematic. The solution to the problem was to reinvent the model for the 1990s. After several years and the combined efforts of USC-CSSE, ISR at UC Irvine, and the COCOMO® II Project Affiliate Organizations , the result is COCOMO® II, a revised cost estimation model reflecting the changes in professional software development practice that have come about since the 1970s. This new, improved COCOMO® is now ready to assist professional software cost estimators for many years to come.

The original model published in 1981 went by the simple name of COCOMO®. This is an acronym derived from the first two letters of each word in the longer phrase COnstructive COst MOdel. The word constructive refers to the fact that the model helps an estimator better understand the complexities of the software job to be done, and by its openness permits the estimator to know exactly why the model gives the estimate it does. Not surprisingly, the new model (composed of all three submodels) was initially given the name COCOMO® 2.0. However, after some confusion in how to designate subsequent releases of the software implementation of the new model, the name was permanently changed to COCOMO® II. To further avoid confusion, the original COCOMO® model was also then re -designated COCOMO® 81. All references to COCOMO® found in books and literature published before 1995 refer to wh at is now called COCOMO® 81. Most references to COCOMO® published from 1995 onward refer to what is now called COCOMO® II.

If in examining a reference you are still unsure as to which model is being discussed, there are a few obvious clues. If in the context of discussing COCOMO® these terms are used: Basic, Intermediate, or Detailed for model names; Organic, Semidetached, or Embedded for development mode, then the model being discussed is COCOMO® 81. However, if the model names mentioned are Application Composition, Early Design, or Post-architecture; or if there is mention of scale factors Precedentedness (PREC), Development Flexibility (FLEX), Architecture/Risk Resolution (RESL), Team Cohesion (TEAM), or Process Maturity (PMAT), then the model being discussed is COCOMO® II.

Intermediate COCOMO computes software development effort as function of program size and a set of "cost drivers" that include subjective assessment of product, hardware, personnel and project attributes. This extension considers a set of four "cost drivers",each with a number of subsidiary attributes:-

o   Complexity of the product

o   Use of software tools

Each of the 15 attributes receives a rating on a six-point scale that ranges from "very low" to "extra high" (in importance or value). An effort multiplier from the table below applies to the rating. The product of all effort multipliers results in an effort adjustment factor (EAF). Typical values for EAF range from 0.9 to 1.4.

where E is the effort applied in person-months, KLoC is the estimated number of thousands of delivered lines of code for the project, and EAF is the factor calculated above. The coefficient ai and the exponent bi are given in the next table. 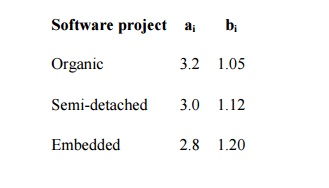 The Development time D calculation uses E in the same way as in the Basic COCOMO.

Detailed COCOMO incorporates all characteristics of the intermediate version with an assessment of the cost driver's impact on each step (analysis, design, etc.) of the software engineering process.

In detailed COCOMO, the effort is calculated as function of program size and a set of cost drivers given according to each phase of software life cycle.

The five phases of detailed COCOMO are:-