The figure shows a simple domain with five nodes. Each node uses the same topology to create a routing table, but the routing table for each node is unique because the calculations are based on different interpretations of the topology. This is analogous to a city map. While each person may have the same map, each needs to take a different route to reach her specific destination.

In link state routing, four sets of actions are required to ensure that each node has the routing table showing the least-cost node to every other node.

1. Creation of the states of the links by each node, called the link state packet (LSP).

2.  Dissemination of LSPs to every other router, called flooding, in an efficient and reliable way.

3. Formation of a shortest path tree for each node.

4. Calculation of a routing table based on the shortest path tree.

A link state packet can carry a large amount of information. For the moment, however, we assume that it carries a minimum amount of data: the node identity, the list of links, a sequence number, and age. The first two, node identity and the list of links, are needed to make the topology. The third, sequence number, facilitates flooding and distinguishes new LSPs from old ones. The fourth, age, prevents old LSPs from remaining in the domain for a long time. LSPs are generated on two occasions:

1. When there is a change in the topology of the domain. Triggering of LSP dissemination is the main way of quickly informing any node in the domain to update its topology.

2.  On a periodic basis. The period in this case is much longer compared to distance vector routing. As a matter of fact, there is no actual need for this type of LSP dissemination.

It is done to ensure that old information is removed from the domain. The timer set for periodic dissemination is normally in the range of 60 min or 2 h based on the implementation. A longer period ensures that flooding does not create too much traffic on the network.

Flooding of LSPs After a node has prepared an LSP, it must be disseminated to all other nodes, not only to its neighbours. The process is called flooding and based on the following:

1. The creating node sends a copy of the LSP out of each interface.

2.  A node that receives an LSP compares it with the copy it may already have. If the newly arrived LSP is older than the one it has (found by checking the sequence number), it discards the LSP. If it is newer, the node does the following:

a. It discards the old LSP and keeps the new one.

b. It sends a copy of it out of each interface except the one from which the packet arrived. This guarantees that flooding stops somewhere in the domain (where a node has only one interface).

Dijkstra Algorithm After receiving all LSPs, each node will have a copy of the whole topology. However, the topology is not sufficient to find the shortest path to every other node; a shortest path tree is needed.

The Dijkstra algorithm creates a shortest path tree from a graph. The algorithm divides the nodes into two sets: tentative and permanent. It finds the neighbours of a current node, makes them tentative, examines them, and if they pass the criteria, makes them permanent. The following shows the steps. At the end of each step, we show the permanent (filled circles) and the tentative (open circles) nodes and lists with the cumulative costs. 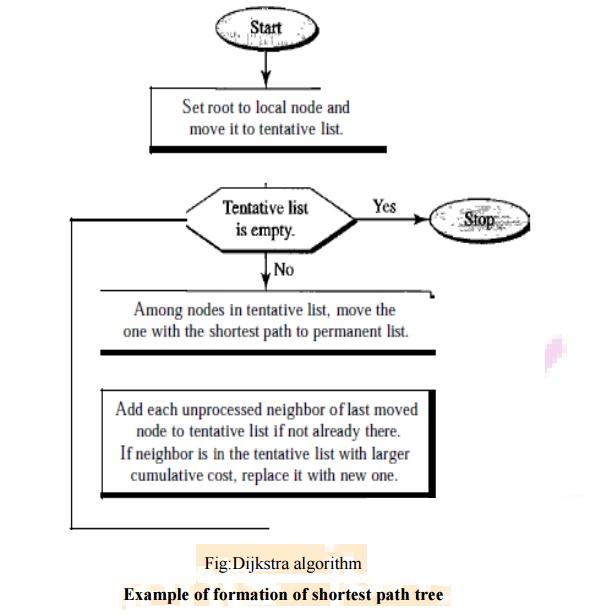 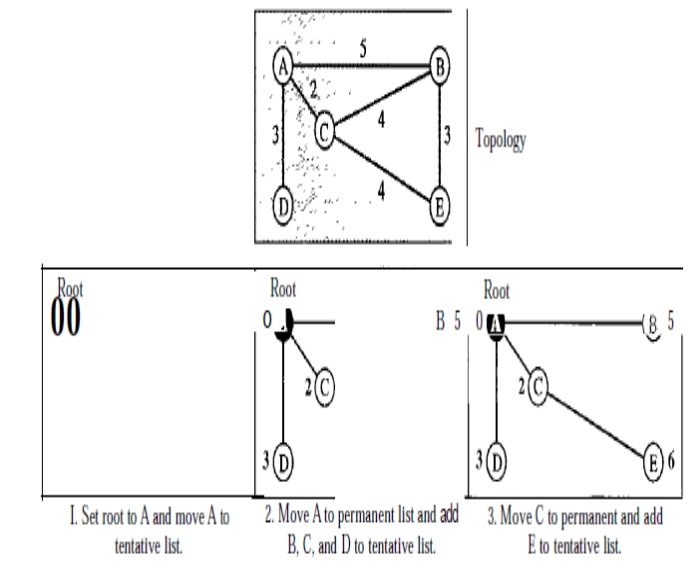 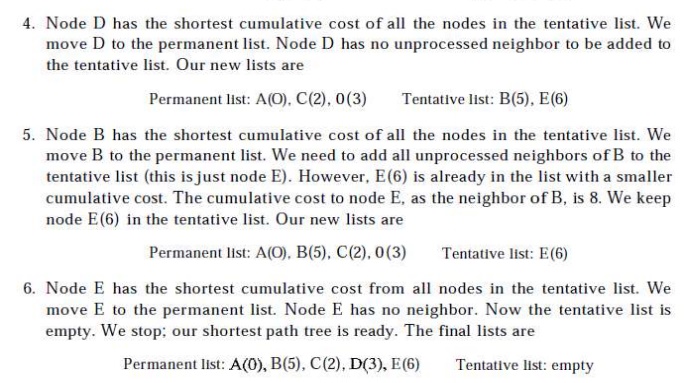 Areas in an autonomous system

The OSPF protocol allows the administrator to assign a cost, called the metric, to each route. The metric can be based on a type of service (minimum delay, maximum throughput, and so on). As a matter of fact, a router can have multiple routing tables, each based on a different type of service. Types of Links In OSPF terminology, a connection is called a link. Four types of links have been defined: point-to-point, transient, stub, and virtual.

A point-to-point link connects two routers without any other host or router in between. In other words, the purpose of the link (network) is just to connect the two routers. An example of this type of link is two routers connected by a telephone line or a T line. There is no need to assign a network address to this type of link. Graphically, the routers are represented by nodes, and the link is represented by a bidirectional edge connecting the nodes. The metrics, which are usually the same, are shown at the two ends, one for each direction.

A transient link is a network with several routers attached to it. The data can enter through any of the routers and leave through any router. All LANs and some WANs with two or more routers are of this type. In this case, each router has many neighbors. For example, consider the Ethernet in Figure. Router A has routers B, C, D, and E as neighbors. Router B has routers A, C, D, and E as neighbors.

When the link between two routers is broken, the administration may create a virtual link between them, using a longer path that probably goes through several routers. Graphical Representation Let us now examine how an AS can be represented graphically. Figure shows a small AS with seven networks and six routers. Two of the networks are point-to-point networks. We use symbols such as Nl and N2 for transient and stub networks. There is no need to assign an identity to a point-to-point network. The figure also shows the graphical representation of the AS as seen by OSPF. 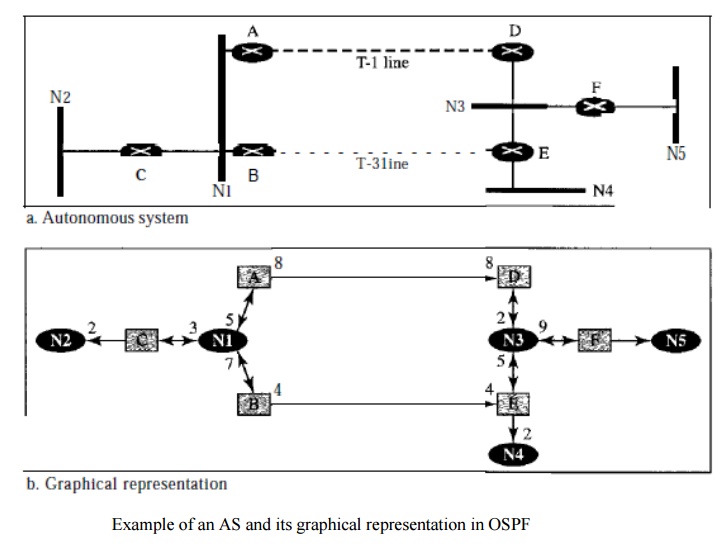 Border Gateway Protocol (BGP) is an implementation of the path vector protocol.

In distance vector routing, the least-cost route between any two nodes is the route with minimum distance. In this protocol, as the name implies, each node maintains a vector (table) of minimum distances to every node. The table at each node also guides the packets to the desired node by showing the next stop in the route (next-hop routing).

The table for node A shows how we can reach any node from this node. For example, our least cost to reach node E is 6. The route passes through C. Each node knows how to reach any other node and the cost. Each node can know only the distance between itself and its immediate neighbors, those directly connected to it.

So for the moment, we assume that each node can send a message to the immediate neighbors and find the distance between itself and these neighbors. 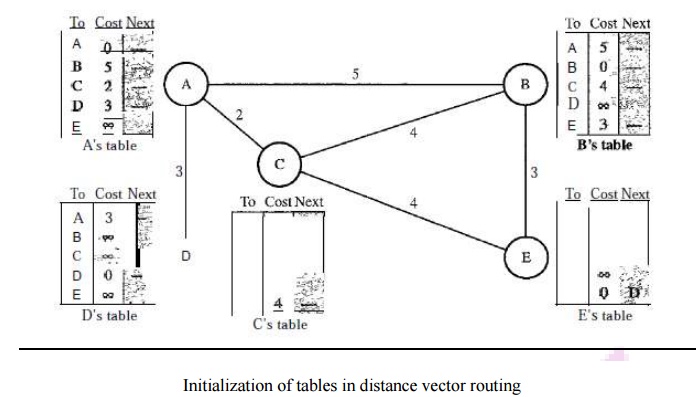 Sharing - In distance vector routing, each node shares its routing table with its immediate neighbors periodically and when there is a change.

Updating - When a node receives a two-column table from a neighbor, it needs to update its routing table.

3. The receiving node needs to compare each row of its old table with the corresponding row of the modified version of the received table.

a. If the next-node entry is different, the receiving node chooses the row with the smaller cost. If there is a tie, the old one is kept.

b. If the next-node entry is the same, the receiving node chooses the new row. For example, suppose node C has previously advertised a route to node X with distance 3. Suppose that now there is no path between C and X; node C now advertises this route with a distance of infinity Node A must not ignore this value even though its old entry is smaller. The old route does not exist any more. The new route has a distance of infinity. 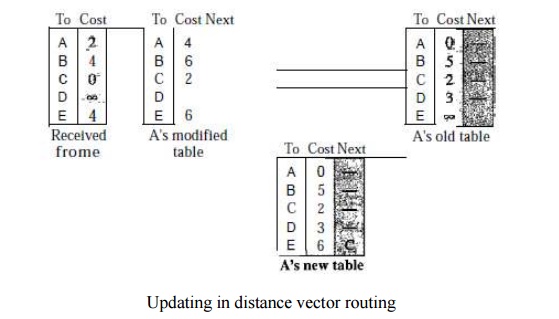 Each node can update its table by using the tables received from other nodes. When to Share:

Periodic Update A node sends its routing table, normally every 30 s, in a periodic update. The period depends on the protocol that is using distance vector routing.

Triggered Update A node sends its two-column routing table to its neighbors anytime there is a change in its routing table. This is called a triggered update.

The change can result from the following.

1. A node receives a table from a neighbor, resulting in changes in its own table after updating.

2.  A node detects some failure in the neighboring links which results in a distance change to infinity.

1. In an autonomous system, we are dealing with routers and networks (links). The routers have routing tables; networks do not.

2.  The destination in a routing table is a network, which means the first column defines a network address.

3.  The metric used by RIP is very simple; the distance is defined as the number of links (networks) to reach the destination. For this reason, the metric in RIP is called a hop count.

4.  Infinity is defined as 16, which means that any route in an autonomous system using RIP cannot have more than 15 hops.

5. The next-node column defines the address of the router to which the packet is to be sent to reach its destination.