MANET: It is an infrastructureless IP based network of mobile and wireless machine nodes connected with radio. In operation, the nodes of a MANET do not have a centralized administration mechanism.

It is an infrastructureless IP based network of mobile and wireless machine nodes connected with radio. In operation, the nodes of a MANET do not have a centralized administration mechanism. It is known for its routeable network properties where each node act as a ―router‖ to forward the traffic to other specified node in the network. 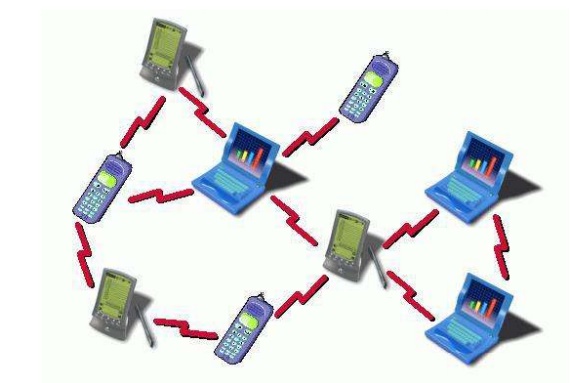 ·        In MANET, each node act as both host and router. That is it is autonomous in behaviour.

·        Multi-hop radio relaying- When a source node and destination node for a message is out of the radio range, the MANETs are capable of multi-hop routing.

·        Distributed nature of operation for security, routing and host configuration. A centralized firewall is absent here.

·        The nodes can join or leave the network anytime, making the network topology dynamic in nature.

·        The reliability, efficiency, stability and capacity of wireless links are often inferior when compared with wired links. This shows the fluctuating link bandwidth of wireless links.

·        Mobile and spontaneous behaviour which demands minimum human intervention to configure the network.

·        All nodes have identical features with similar responsibilities and capabilities and hence it forms a completely symmetric environment.

·        Distributed operation: There is no background network for the central control of the network operations, the control of the network is distributed among the nodes. The nodes involved in a MANET should cooperate with each other and communicate among themselves and each node acts as a relay as needed, to implement specific functions such as routing and security.

·        Multi hop routing: When a node tries to send information to other nodes which is out of its communication range, the packet should be forwarded via one or more intermediate nodes.

·        Autonomous terminal: In MANET, each mobile node is an independent node, which could function as both a host and a router.

·        Dynamic topology: Nodes are free to move arbitrarily with different speeds; thus, the network topology may change randomly and at unpredictable time. The nodes in the MANET dynamically establish routing among themselves as they travel around, establishing their own network.

·        Shared Physical Medium: The wireless communication medium is accessible to any entity with the appropriate equipment and adequate resources. Accordingly, access to the channel cannot be restricted.