The general structure of erythromycin is shown with the mac-rolide ring and the sugars desosamine and cladinose.

The general structure of erythromycin is shown with the mac-rolide ring and the sugars desosamine and cladinose. It is poorly soluble in water (0.1%) but dissolves readily in organic solvents. Solutions are fairly stable at 4°C but lose activity rapidly at 20°C and at acid pH. Erythromycins are usually dispensed as various esters and salts.

The antibacterial action of erythromycin and other macrolides may be inhibitory or bactericidal, particularly at higher concentrations, for susceptible organisms. Activity is enhanced at alkaline pH. Inhibition of protein synthesis occurs via binding to the 50S ribosomal RNA. The binding site is near the peptidyltransferase center, and peptide chain elongation (ie, transpeptidation) is prevented by blocking of the polypeptide exit tunnel. As a result, peptidyl-tRNA is dissociated from the ribosome. Erythromycin also inhibits the formation of the 50S ribosomal subunit (Figure 44–1). 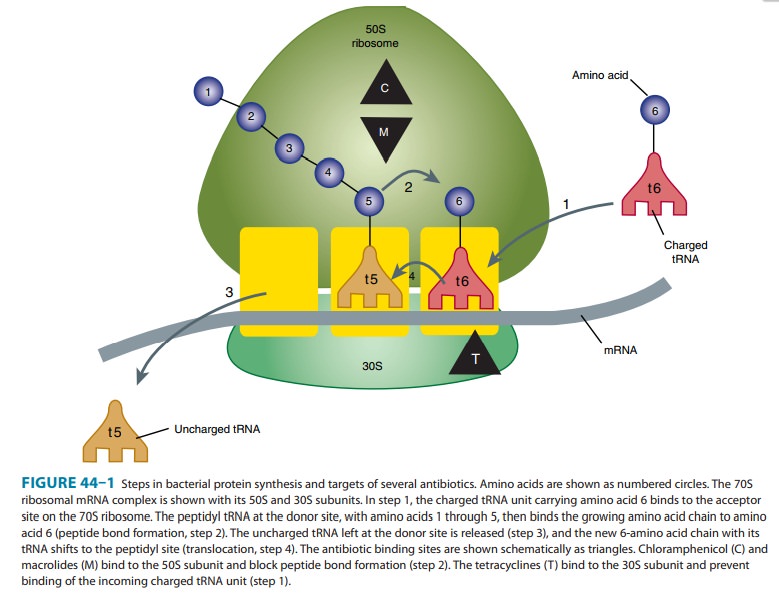 Resistance to erythromycin is usually plasmid-encoded. Three mechanisms have been identified: (1) reduced permeability of the cell membrane or active efflux; (2) production (by Enterobacteriaceae) of esterases that hydrolyze macrolides; and (3) modification of the ribosomal binding site (so-called ribosomal protection) by chromo-somal mutation or by a macrolide-inducible or constitutive methylase. Efflux and methylase production are the most important resistance mechanisms in gram-positive organisms. Cross-resistance is complete between erythromycin and the other macrolides. Constitutive methylase production also confers resistance to struc-turally unrelated but mechanistically similar compounds such as clindamycin and streptogramin B (so-called macrolide-lincosamide-streptogramin, or MLS-type B, resistance), which share the same ribosomal binding site. Because nonmacrolides are poor inducers of the methylase, strains expressing an inducible methylase will appear susceptible in vitro. However, constitutive mutants that are resistant can be selected out and emerge during therapy with clindamycin.

Erythromycin base is destroyed by stomach acid and must be administered with enteric coating. Food interferes with absorption. Stearates and esters are fairly acid-resistant and somewhat better absorbed. The lauryl salt of the propionyl ester of erythromycin (erythromycin estolate) is the best-absorbed oral preparation. Oral dosage of 2 g/d results in serum erythromycin base and ester con-centrations of approximately 2 mcg/mL. However, only the base is microbiologically active, and its concentration tends to be similar regardless of the formulation. A 500-mg intravenous dose of eryth-romycin lactobionate produces serum concentrations of 10 mcg/ mL 1 hour after dosing. The serum half-life is approximately 1.5 hours normally and 5 hours in patients with anuria. Adjustment for renal failure is not necessary. Erythromycin is not removed by dialy-sis. Large amounts of an administered dose are excreted in the bile and lost in feces, and only 5% is excreted in the urine. Absorbed drug is distributed widely except to the brain and cerebrospinal fluid. Erythromycin is taken up by polymorphonuclear leukocytes and macrophages. It traverses the placenta and reaches the fetus.

Erythromycin is a drug of choice in corynebacterial infections (diphtheria, corynebacterial sepsis, erythrasma); in respiratory,neonatal, ocular, or genital chlamydial infections; and in treatment of community-acquired pneumonia because its spectrum of activ-ity includes pneumococcus, M pneumoniae, and L pneumophila. Erythromycin is also useful as a penicillin substitute in penicillin-allergic individuals with infections caused by staphylococci (assuming that the isolate is susceptible), streptococci, or pneumo-cocci. Emergence of erythromycin resistance in strains of group A streptococci and pneumococci (penicillin-non-susceptible pneu-mococci in particular) has made macrolides less attractive as first-line agents for treatment of pharyngitis, skin and soft tissue infections, and pneumonia. Erythromycin has been recommended as prophylaxis against endocarditis during dental procedures in individuals with valvular heart disease, although clindamycin, which is better tolerated, has largely replaced it. Although eryth-romycin estolate is the best-absorbed salt, it imposes the greatest risk of adverse reactions. Therefore, the stearate or succinate salt may be preferred.

Anorexia, nausea, vomiting, and diarrhea are common. Gastrointestinal intolerance, which is due to a direct stimulation of gut motility, is the most common reason for discontinuing erythromycin and substitut-ing another antibiotic.

Erythromycins, particularly the estolate, can produce acute cholestatic hepatitis (fever, jaundice, impaired liver function), probably as a hypersensitivity reaction. Most patients recover from this, but hepatitis recurs if the drug is readministered. Other aller-gic reactions include fever, eosinophilia, and rashes.