It is soluble in alcohol but poorly soluble in water. Chlorampheni-col succinate, which is used for parenteral administration, is highly water-soluble. It is hydrolyzed in vivo with liberation of free chloramphenicol.

Crystalline chloramphenicol is a neutral, stable compound with the following structure:

It is soluble in alcohol but poorly soluble in water. Chlorampheni-col succinate, which is used for parenteral administration, is highly water-soluble. It is hydrolyzed in vivo with liberation of free chloramphenicol.

Chloramphenicol is a potent inhibitor of microbial protein synthesis. It binds reversibly to the 50S subunit of the bacterial ribosome

(Figure 44–1) and inhibits peptide bond formation (step 2). Chloramphenicol is a bacteriostatic broad-spectrum antibiotic that is active against both aerobic and anaerobic gram-positive and gram-negative organisms. It is active also against Rickettsiae but not Chlamydiae. Most gram-positive bacteria are inhibited at concentra-tions of 1–10 mcg/mL, and many gram-negative bacteria are inhib-ited by concentrations of 0.2–5 mcg/mL. H influenzae, Neisseriameningitidis, and some strains of bacteroides are highly susceptible,and for these organisms, chloramphenicol may be bactericidal. 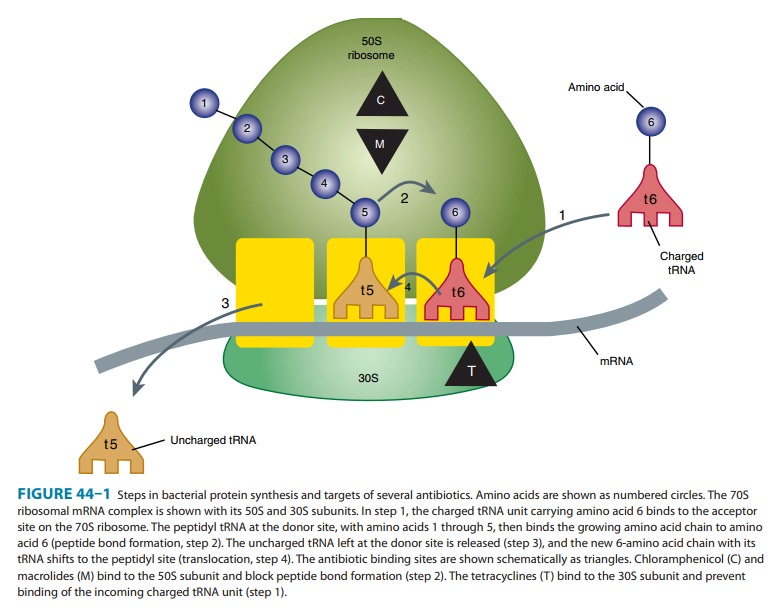 Most of the drug is inactivated either by conjugation with glucuronic acid (principally in the liver) or by reduction to inac-tive aryl amines. Active chloramphenicol (about 10% of the total dose administered) and its inactive degradation products (about 90% of the total) are eliminated in the urine. A small amount of active drug is excreted into bile and feces. The systemic dosage of chloramphenicol need not be altered in renal insufficiency, but it must be reduced markedly in hepatic failure. Newborns less than a week old and premature infants also clear chloramphenicol less well, and the dosage should be reduced to 25 mg/kg/d.

Because of potential toxicity, bacterial resistance, and the avail-ability of many other effective alternatives, chloramphenicol is rarely used in the United States. It may be considered for treat-ment of serious rickettsial infections such as typhus and Rocky Mountain spotted fever. It is an alternative to a β-lactam antibiotic for treatment of bacterial meningitis occurring in patients who have major hypersensitivity reactions to penicillin. The dosage is 50–100 mg/kg/d in four divided doses.

Chloramphenicol is used topically in the treatment of eye infections because of its broad spectrum and its penetration of ocular tissues and the aqueous humor. It is ineffective for chla-mydial infections.

Adults occasionally develop gastrointestinal disturbances, includ-ing nausea, vomiting, and diarrhea. This is rare in children. Oral or vaginal candidiasis may occur as a result of alteration of normal microbial flora.

Chloramphenicol commonly causes a dose-related reversible suppression of red cell production at dosages exceeding 50 mg/ kg/d after 1–2 weeks. Aplastic anemia, a rare consequence (1 in 24,000 to 40,000 courses of therapy) of chloramphenicol admin-istration by any route, is an idiosyncratic reaction unrelated to dose, although it occurs more frequently with prolonged use. It tends to be irreversible and can be fatal.

Newborn infants lack an effective glucuronic acid conjugation mechanism for the degradation and detoxification of chloram-phenicol. Consequently, when infants are given dosages above 50 mg/kg/d, the drug may accumulate, resulting in the gray babysyndrome, with vomiting, flaccidity, hypothermia, gray color, shock,and vascular collapse. To avoid this toxic effect, chloramphenicol should be used with caution in infants and the dosage limited to 50 mg/kg/d (or less during the first week of life) in full-term infants more than 1 week old and 25 mg/kg/d in premature infants.

Chloramphenicol inhibits hepatic microsomal enzymes that metabolize several drugs. Half-lives of these drugs are prolonged, and the serum concentrations of phenytoin, tolbutamide, chlorpropa-mide, and warfarin are increased. Like other bacteriostatic inhibitors of microbial protein synthesis, chloramphenicol can antagonize bac-tericidal drugs such as penicillins or aminoglycosides.