Brucella infection is worldwide in distribution. The conditionis endemic in certain Mediterranean countries.

Brucella infection is worldwide in distribution. The conditionis endemic in certain Mediterranean countries. More than 500,000 cases of brucellosis are reported annually. Different Brucella species cause human infection in different geographicalareas. B. melitensis is the major species causing human infection in India. In the United States, B. suis is the major species respon-sible for infection, whereas in Great Britain, B. abortus is the important species responsible for infection.

Brucella species cause infection in a wide range of hosts, butthese species show a high degree of host specificity. B. meliten-sis infects goats and sheep; B. abortus, cattle; B. suis, swines; and B. canis, dogs and foxes. The infected animals, such as cattle,goats, sheep, buffalos, and swine are the important reservoirs of infections.

The incidence of human disease is very closely related to the prevalence of infections in cattle, goats, and sheep. This is also related to activities that allow exposure of humans to poten-tially infected animals or their products.

Human brucellosis is primarily a zoonotic bacterial infection. The infection is acquired always from animals directly or indirectly.Brucella organism is transmitted to humans by the following ways (Fig. 40-1): (a) ingestion, (b) direct contact, (c) inhalation, and (d) accidental inoculation. 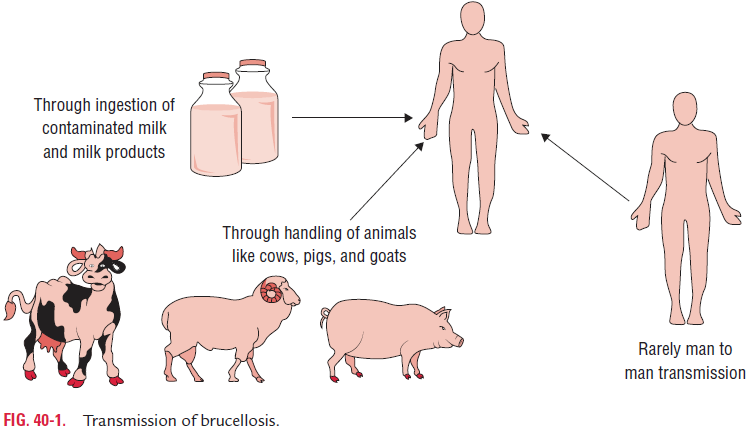 3. Inhalation: The infection is transmitted by inhalation ofdust from wool or other dried material of infected animals. Infection by inhalation is important among veterinarians and laboratory workers.