Brucella: Properties of the Bacteria

·           These are arranged singly, sometimes in pairs, or in short chains. They do not produce spores, flagella, or capsule.

Brucellae are strict aerobes. Most biovars of B. abortus require 5–10% CO2 for their growth. No growth occurs in aerobic condi-tions. They grow at a temperature range of 22–40°C (optimum temperature 37°C) and pH range of 6.6–7.4. Brucellae can grow on simple media, but their growth is slow and scanty. Growth is improved by addition of serum, blood, liver extract, and glucose. Brucellaorganisms grow best on trypticase soy based or other enriched media. Blood agar and trypticase soy agar are the media of choice. Tryptose agar, trypticase soy agar, serum potato infusion agar, and serum dextrose agar are the other media also used for culture of Brucellae. Addition of bacitra-cin, polymyxin, and cycloheximide to these media makes them selective. On these solid media,Brucella spp. produce small, moist, translucent, and glistening colonies after 3 or more days of incubation. In liquid media, growth is uniform.

·           Brucellae are catalase and oxidase positive (except for B. ovis and B. neotomae, which are oxidase negative).

Brucella species and biovars are differentiated by following char-acteristics (Table 40-2): (a) growth in the presence of aniline dyes, such as basic fuchsin dyes or thionine; ( b) requirement for CO2; (c) ability to use glutamic acid, ornithine, lysine, and ribose; (d ) ability to produce H2S; (e) agglutination by antisera against specific lipopolysaccharide (LPS); and (f ) susceptibility to lysis by bacteriophage. 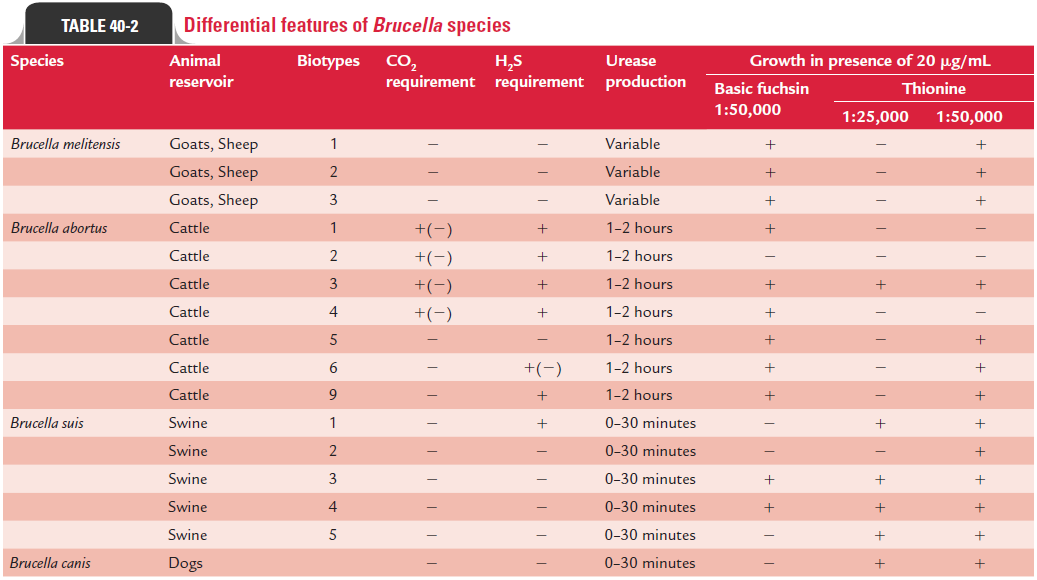 B. abortus consists of seven biotypes, B. melitensis three biotypes,and B. suis five biotypes. H2S-producing B. suis strains are called American strains, and those not producing H2S are called Danish strains.

Tblisi ( Tb) is the reference phage used for phage typing of Brucella species. This phage lyses B. abortus both at routine testdilution (RTD) and at 10,000 RTD. The phage lyses B. suis at 10,000 RTD only, but does not lyse any strain of B. melitensis.

Susceptibility to physical and chemical agents: The bru-cellae are rapidly killed at 608C in 10 minutes; hence they are killed by pasteurization in the milk. They are also killed by dis-infectants, such as 1% phenol in 15 minutes. They are sensitive to direct sunlight and acid. The bacteria survive for 10 days in refrigerated milk, for 1 month in ice cream, and for 4 months in butter. B. melitensis remains viable in urine for 6 days, in dust for 6 weeks, and in water or soil for 10 weeks.