Encapsulation of Operations and Persistence of Objects

The concept of encapsulation is one of the main characteristics of OO languages and systems.

Encapsulation of Operations and Persistence of Objects

Encapsulation of Operations. The concept of encapsulation is one of the main characteristics of OO languages and systems. It is also related to the concepts of abstract data types and information hiding in programming languages. In traditional database models and systems this concept was not applied, since it is customary to make the structure of database objects visible to users and external programs. In these traditional models, a number of generic database operations are applicable to objects of all types. For example, in the relational model, the operations for selecting, inserting, deleting, and modifying tuples are generic and may be applied to any relation in the database. The relation and its attributes are visible to users and to external programs that access the relation by using these operations. The concepts of encapsulation is applied to database objects in ODBs by defining the behavior of a type of object based on the operations that can be externally applied to objects of that type. Some operations may be used to create (insert) or destroy (delete) objects; other operations may update the object state; and others may be used to retrieve parts of the object state or to apply some calculations. Still other operations may perform a combination of retrieval, calculation, and update. In general, the implementation of an operation can be specified in a general-purpose programming language that provides flexibility and power in defining the operations.

For database applications, the requirement that all objects be completely encapsulated is too stringent. One way to relax this requirement is to divide the structure of an object into visible and hidden attributes (instance variables). Visible attributes can be seen by and are directly accessible to the database users and programmers via the query language. The hidden attributes of an object are completely encapsulated and can be accessed only through predefined operations. Most ODMSs employ high-level query languages for accessing visible attributes. In Section 11.5 we will describe the OQL query language that is proposed as a standard query language for ODBs. 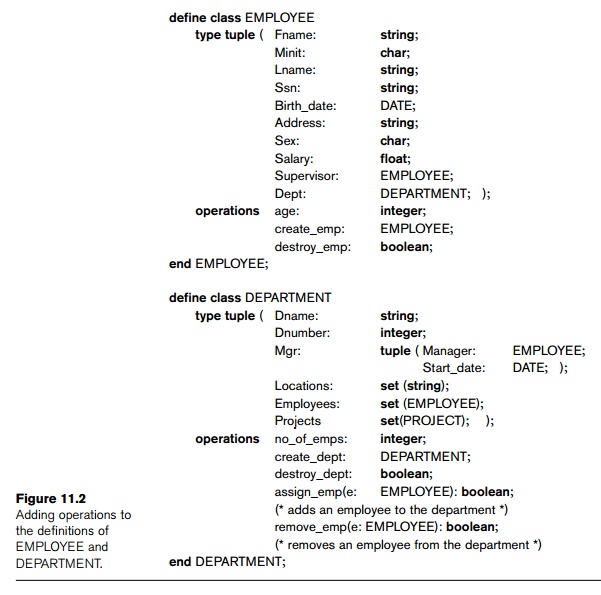 declared for each class, and the signature (interface) of each operation is included in the class definition. A method (implementation) for each operation must be defined elsewhere using a programming language. Typical operations include the object constructor operation (often called new), which is used to create a new object, and the destructor operation, which is used to destroy (delete) an object. A number of object modifier operations can also be declared to modify the states (values) of various attributes of an object. Additional operations can retrieve information about the object.

An operation is typically applied to an object by using the dot notation. For exam-ple, if d is a reference to a DEPARTMENT object, we can invoke an operation such as no_of_emps by writing d.no_of_emps. Similarly, by writing d.destroy_dept, the object referenced by d is destroyed (deleted). The only exception is the constructor opera-tion, which returns a reference to a new DEPARTMENT object. Hence, it is customary in some OO models to have a default name for the constructor operation that is the name of the class itself, although this was not used in Figure 11.2. The dot nota-tion is also used to refer to attributes of an object—for example, by writing d.Dnumber or d.Mgr_Start_date.

Specifying Object Persistence via Naming and Reachability. An ODBS is often closely coupled with an object-oriented programming language (OOPL). The OOPL is used to specify the method (operation) implementations as well as other application code. Not all objects are meant to be stored permanently in the data-base. Transient objects exist in the executing program and disappear once the pro-gram terminates. Persistent objects are stored in the database and persist after program termination. The typical mechanisms for making an object persistent are naming and reachability.

The naming mechanism involves giving an object a unique persistent name within a particular database. This persistent object name can be given via a specific statement or operation in the program, as shown in Figure 11.3. The named persistent objects are used as entry points to the database through which users and applications can start their database access. Obviously, it is not practical to give names to all objects in a large database that includes thousands of objects, so most objects are made persistent by using the second mechanism, called reachability. The reachability mechanism works by making the object reachable from some other persistent object. An object B is said to be reachable from an object A if a sequence of references in the database lead from object A to object B.

If we first create a named persistent object N, whose state is a set (or possibly a bag) of objects of some class C, we can make objects of C persistent by adding them to the set, thus making them reachable from N. Hence, N is a named object that defines a persistent collection of objects of class C. In the object model standard, N is called the extent of C (see Section 11.3).

For example, we can define a class DEPARTMENT_SET (see Figure 11.3) whose objects are of type set(DEPARTMENT).14 We can create an object of type DEPARTMENT_SET, and give it a persistent name ALL_DEPARTMENTS, as shown in Figure 11.3. Any DEPARTMENT object that is added to the set of ALL_DEPARTMENTS by using the add_dept operation becomes persistent by virtue of its being reachable from ALL_DEPARTMENTS. As we will see in Section 11.3, the ODMG ODL standard gives the schema designer the option of naming an extent as part of class definition.

Notice the difference between traditional database models and ODBs in this respect. 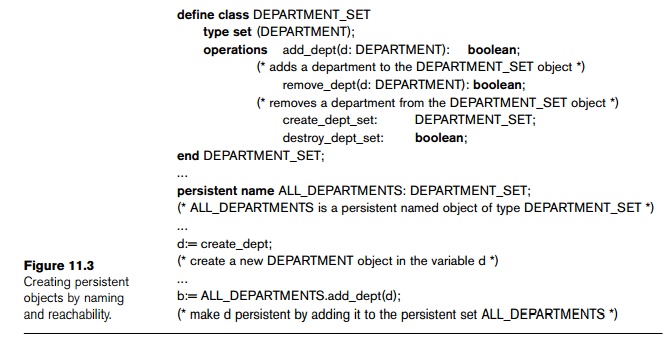 In traditional database models, such as the relational model, all objects are assumed to be persistent. Hence, when a table such as EMPLOYEE is created in a relational database, it represents both the type declaration for EMPLOYEE and a persistent set of all EMPLOYEE records (tuples). In the OO approach, a class declaration of EMPLOYEE specifies only the type and operations for a class of objects. The user must separately define a persistent object of type set(EMPLOYEE) or bag(EMPLOYEE) whose value is the collection of references (OIDs) to all persistent EMPLOYEE objects, if this is desired, as shown in Figure 11.3. This allows transient and persistent objects to follow the same type and class declarations of the ODL and the OOPL. In general, it is possible to define several persistent collections for the same class definition, if desired.