Another feature of an ODMS (and ODBs in general) is that objects and literals may have a type structure of arbitrary complexity in order to contain all of the necessary information that describes the object or literal.

Another feature of an ODMS (and ODBs in general) is that objects and literals may have a type structure of arbitrary complexity in order to contain all of the necessary information that describes the object or literal. In contrast, in traditional database systems, information about a complex object is often scattered over many relations or records, leading to loss of direct correspondence between a real-world object and its database representation. In ODBs, a complex type may be constructed from other types by nesting of type constructors. The three most basic constructors are atom, struct (or tuple), and collection.

One type constructor has been called the atom constructor, although this term is not used in the latest object standard. This includes the basic built-in data types of the object model, which are similar to the basic types in many programming languages: integers, strings, floating point numbers, enumer-ated types, Booleans, and so on. They are called single-valued or atomic types, since each value of the type is considered an atomic (indivisible) sin-gle value.

A second type constructor is referred to as the struct (or tuple) constructor. This can create standard structured types, such as the tuples (record types) in the basic relational model. A structured type is made up of several compo-nents, and is also sometimes referred to as a compound or composite type. More accurately, the struct constructor is not considered to be a type, but rather a type generator, because many different structured types can be cre-ated. For example, two different structured types that can be created are: struct Name<FirstName: string, MiddleInitial: char, LastName: string>, and struct CollegeDegree<Major: string, Degree: string, Year: date>. To create complex nested type structures in the object model, the collection type con-structors are needed, which we discuss next. Notice that the type construc-tors atom and struct are the only ones available in the original (basic) relational model.

Collection (or multivalued) type constructors include the set(T), list(T), bag(T), array(T), and dictionary(K,T) type constructors. These allow part of an object or literal value to include a collection of other objects or values when needed. These constructors are also considered to be type generators because many different types can be created. For example, set(string), set(integer), and set(Employee) are three different types that can be created from the set type constructor. All the elements in a particular collection value must be of the same type. For example, all values in a collection of type set(string) must be string values.

The atom constructor is used to represent all basic atomic values, such as integers, real numbers, character strings, Booleans, and any other basic data types that the

system supports directly. The tuple constructor can create structured values and objects of the form <a1:i1, a2:i2, ..., an:in>, where each aj is an attribute name and each ij is a value or an OID.

The other commonly used constructors are collectively referred to as collection types, but have individual differences among them. The set constructor will create objects or literals that are a set of distinct elements {i1, i2, ..., in}, all of the same type. The bag constructor (sometimes called a multiset) is similar to a set except that the elements in a bag need not be distinct. The list constructor will create an ordered list [i1, i2, ..., in] of OIDs or values of the same type. A list is similar to a bag except that the elements in a list are ordered, and hence we can refer to the first, second, or jth element. The array constructor creates a single-dimensional array of elements of the same type. The main difference between array and list is that a list can have an arbitrary number of elements whereas an array typically has a maximum size. Finally, the dictionary constructor creates a collection of two tuples (K, V), where the value of a key K can be used to retrieve the corresponding value V.

An object definition language (ODL) that incorporates the preceding type con-structors can be used to define the object types for a particular database application. In Section 11.3 we will describe the standard ODL of ODMG, but first we introduce the concepts gradually in this section using a simpler notation. The type construc-tors can be used to define the data structures for an OO database schema. Figure 11.1 shows how we may declare EMPLOYEE and DEPARTMENT types. 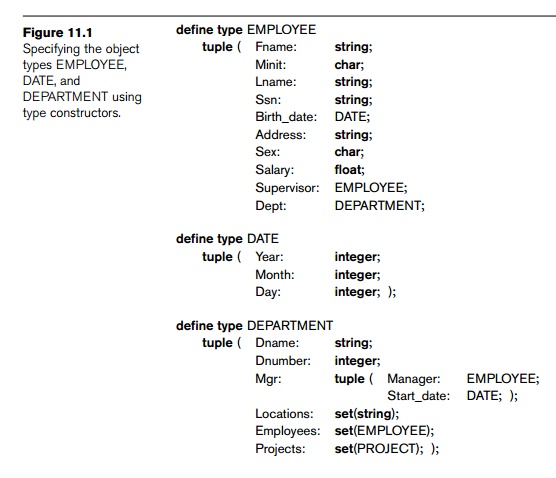