Corporate-SHG Linkage –SHG is a group of 10-15 women organized by government bodies or NGOs, who come together to form a mutual thrift group, to inculcate savings discipline and boost feelings of self-worth among women.

Corporate-SHG Linkage –SHG is a group of 10-15 women organized by government bodies or NGOs, who come together to form a mutual thrift group, to inculcate savings discipline and boost feelings of self-worth among women. Members of SHGs get matching loans from rural banks to set up income-generating enterprises. Originally, SHGs were formed to support poverty-alleviation programmes in rural areas after the success of the model in Bangladesh, where this concept originated.

HUL’sProject Shakti was targeted at strengthening the company‘sdistributionFMCG r drive. drive. Interested women from SHG‘s were appointed as Shakti entrepreneurs, they borrow money from their group corpus and provide services to 6-10 villages, covering a population of 6000-10000.They receive stocks from HUL rural distributors and make sales to both retailers and direct consumers in villages.

Stockists are appointed in major towns and feeder towns. By and large, they discharge the following functions : a) financing, b) warehousing and c) sub-distribution.

Retailers in and around the feeder towns get attached to these stockists. The manufacturer supplies goods to the stockists either on a consignment basis or on a cash or credit purchase basis.

The stockists take care of sub-distribution on the terms and conditions determined by the manufacturer or as agreed upon by the parties. Often, the stockists operate their own delivery vans to take care of secondary transport and local delivery jobs. 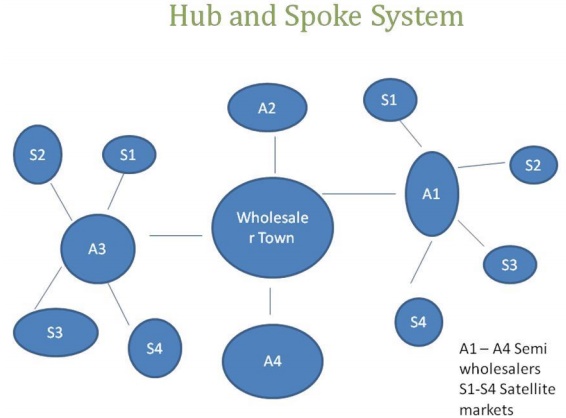 Syndicated distribution is a viable and novel approach to gain entry into rural markets. Under this approach, two or more companies come together to form a syndicated trading organization, to jointly distribute a collective group of household products in rural markets by sharing distribution costs.

ITC has taken the initiative to reach rural consumers through its e-choupal model for backward and forward linkages for its agri-related business, for direct procurement of

agri produce from farmers and for selling a range of products through Choupal Sagar.

These petrol pumps, in addition to petrol/diesel, oil and lubricants are also selling consumables such as soaps, detergents, biscuits etc, particularly on the highways. These bunks may also think of stocking certain consumable agricultural inputs like fertilizers, seeds and pesticides.

12,000 petrol pumps of which 60% on highways close to villages Also sell consumables like food products and toiletries

There are about 2, 62,000 fertilizer dealers in the country. During off season most of the dealers don‘t have business, hence the companies m products also during their free time.

Hero Honda Motors has 400 dealers all over the country. The company has reported the emergence of an unofficial channel of distribution –village mechanics, local real estate agents and shopkeepers. These people take the motorcycles, usually in twos and threes, from company dealers after providing adequate security deposits and display them outside their premises for closing the sale. The paper work, however, is left to the dealer to complete.

On the basis of the equation Per Capita Sales (PCS) = Annual Sales / Market Population, the ideal distribution model for rural can be depicted as follows :