The patient in hospital is the center of care, but he is also helpless in the center of potential dangers, which are in the industry, long time ago, as such identified (i.e. chemicals, electricity, radiation).

The Mechanism of the El. Shock

El. Shock occurs when a victim is a part of an electrical circuit (an element closing it), in which an electrical current can flow and has the ability to harm the victim or even cause death (electrocution).That means consequently that there must be a simultaneous two-points contact of the victim with the electrical shock circuit.

For technical reasons, neutral point (and consequently the neutral line) is deliberately connected to earth. It is this connection that makes the electrical service a “grounded system”.Understanding this is the key for understanding the mechanism of electric shock and electrocution.The voltage between the two power-carrying wires (Phase (P) & Neutral (N) or “hot & cold”) is also present between Phase and Ground (which is not considered as power carrying wire) and every thing connected to earth.

Connecting N-line of the service side to earth due to technical reason and for protection of systems and plants (removing the floating high voltage in the secondary (service) side of the distribution transformer).

Connecting conducting parts, which are not intended for carrying current in normal circumstances (enclosures; switch-, fuse-, outlet- metal boxes; etc.) via 3rd conductor (which, in normal situations, does not carry current) to earth.

Leakage Currents: Caused by stray capacitances, which are always present between conducting surfaces.

Due to the relatively low values of the stray capacitances and frequency, the resulting el. Pathway is very high resistive , and hence, the resulting leakage currents are very low.Distinguishing between leakage and fault current depends on the internal resistance of the source in relation to the load in a given circuit.

External or touch - current shock (voltage applied externally, current pass through the skin in and out 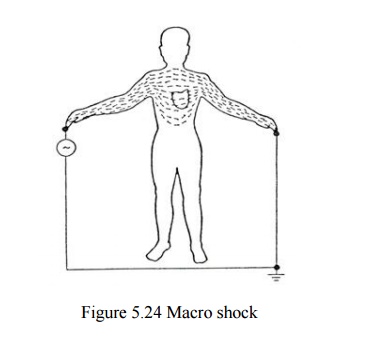 Current affect heart directly (through pacemaker leads or catheter) Currents less than (100) micro-Ampere have the potential to cause VF (it is possible from (25) micro-Ampere up). 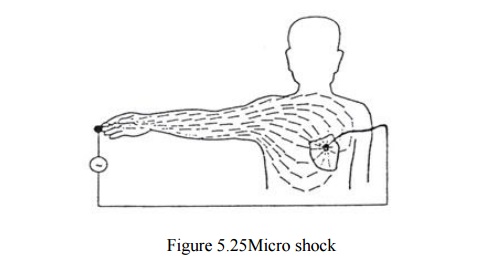 Methods of Protection Against El. Shock

Simple, efficient, and inexpensive, but it is not “fail-safe” (i.e. if it fails, equipment does not go in a safe mode (alarm, power interruption for example)).

All surfaces which can be contacted are made of non- conductive materials, or all voltage carrying parts are double insulated. Equipment protected this way are referred to as class II, and need not to be earthed.

·        If supply is via transformer, then primary and secondary must be galvanically separated.

If difference between currents in “hot” and neutral wires is more than 6 mA, the circuit

breaker is activated within 5 ms.

Isolation transformer is used to omit the ground connection so that the el. System on service side is no more “ground seeking 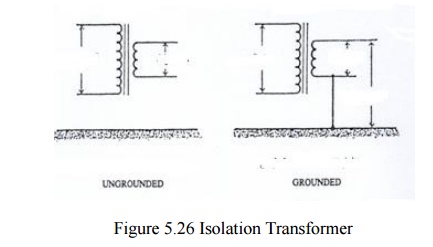 ·        LIM measure this resistance.The monitored value in LIM represent a virtual current which would flow if a short-circuit occurred between a power carrying line and earth (prognostic value, worst case condition).

·        Grounding of the equipment is independent of the power system (isolated or not).

·        IPS is necessary for operation theatres (OT), but is not necessary (and not required) for ICU.

Hazard due to ungrounded lamp 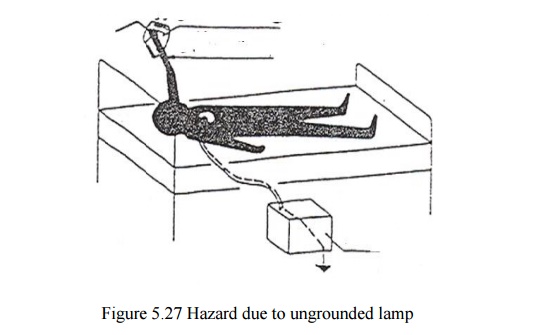 through patient to earth). 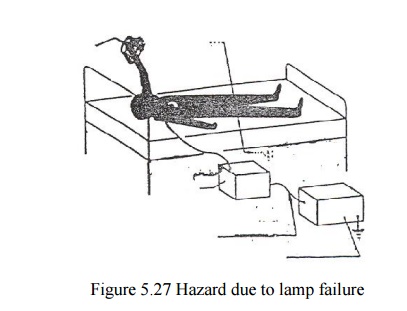 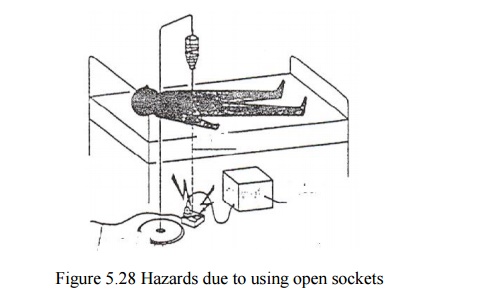 If patient connected to more than one equipment , and the equipment are powered from a socket-block, then the connection of the patient with the ground must be through one wire only.

·        Equipment connected to a patient to be powered from one socket, or a block of sockets having the same protective grounding point.

·        All metal subjects in the vicinity of the patient to be grounded one at a time with the same protective ground point.

·        Patient to be connected to the common ground through only one grounding pole.

·        Isolation amplifiers to be used for measurements if possible.

·        If possible, avoid using material which can be charged electro-statically .

·        Deal carefully with electric wires and sockets and let it be checked periodically. Do not use extension cables. Do not use faulty cables / plugs and ask for replacement.

·        If an equipment has a failure, which can cause electric shock, it has to be taken out of service immediately. Reversing the plug (this “advice” is heard often) , which might lead to eliminate the shock, is a wrong action / behavior.

·        If, by touching the metallic surface of an equipment, you sensed an electric prickle (even a light one), then plug off the equipment immediately and ask for check. This equipment is either badly earthed or not earthed at all.

·        Do not use any medical equipment you do not know the basics of its operation and did not read its instruction manual carefully.