If a capacitor and/or inductor is added to a DC circuit, the resulting circuit is not, strictly speaking, a DC circuit. However, most such circuits have a DC solution. This solution gives the circuit voltages and currents when the circuit is in DC steady state. More technically, such a circuit is represented by a system of differential equations. The solution to these equations usually contain a time varying or transient part as well as constant or steady state part. It is this steady state part that is the DC solution. There are some circuits that do not have a DC solution. Two simple examples are a constant current source connected to a capacitor and a constant voltage source connected to an inductor.

In electronics, it is common to refer to a circuit that is powered by a DC voltage source such as a battery or the output of a DC power supply as a DC circuit even though what is meant is that the circuit is DC powered. 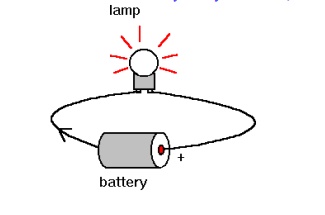 The flow of charge is called the current and it is the rate at which electric charges pass though a conductor. The charged particle can be either positive or negative. In order for a charge to flow, it needs a push (a force) and it is supplied by voltage, or potential difference. The charge flows from high potential energy to low potential energy.

Where the symbol I to represent the quantity current.

Electromotive Force is, the voltage produced by an electric battery or generator in an electrical circuit or, more precisely, the energy supplied by a source of electric power in driving a unit charge around the circuit. The unit is the volt. A difference in charge between two points in a material can be created by an external energy source such as a battery. This causes electrons to move so that there is an excess of electrons at one point and a deficiency of electrons at a second point. This difference in charge is stored as electrical potential energy known as emf. It is the emf that causes a current to flow through a circuit.

A quantity related to the amount of energy needed to move an object from one place to another against various types of forces. The term is most often used as an abbreviation of "electrical potential difference", but it also occurs in many other branches of physics. Only changes in potential or potential energy (not the absolute values) can be measured.

Resistance is the ratio of potential difference across a conductor to the current flowing through it. If energy is used in passing electricity through an object, that object has a resistance.

Another very useful application of electromagnetism is the "CAT scan machine." This machine is usually used in hospitals to diagnose a disease. As we know that current is present in our body and the stronger the current, the strong is the magnetic field. This scanning technology is able to pick up the magnetic fields, and it can be easily identified where there is a great amount of electrical activity inside the body.

Resistance is the opposition that a substance offers to the flow of electric current. It is represented by the uppercase letter R. The standard unit of resistance is the ohm, sometimes written out as a word, and sometimes symbolized by the uppercase Greek letter omega. When an electric current of one ampere passes through a component across which a potential difference (voltage) of one volt exists, then the resistance of that component is one ohm.

In some AC circuits, especially at high frequencies, the situation is more complex, because some components in these systems can store and release energy, as well as dissipating or converting it.The electrical resistance per unit length, area, or volume of a substance is known as resistivity. Resistivity figures are often specified for copper and aluminum wire, in ohms per kilometre. Opposition to AC, but not to DC, is a property known as reactance. In an AC circuit, the resistance and reactance combine vectorially to yield impedance.

The voltage between two points is a short name for the electrical force that would drive an electric current between those points. Specifically, voltage is equal to energy per unit charge. In the case of static electric fields, the voltage between two points is equal to the electrical potential difference between those points. In the more general case with electric and magnetic fields that vary with time, the terms are no longer synonymous.

Electric potential is the energy required to move a unit electric charge to a particular place in a static electric field.Voltage can be measured by a voltmeter. The unit of measurement is the volt.

Voltage should be more correctly called "potential difference". It is actually the electron moving force in electricity (emf) and the potential difference is responsible for the pushing and pulling of electrons or electric current through a circuit.

The usual waveform of an AC circuit is generally that of a sine wave, as this results in the most efficient transmission of energy. However in certain applications different waveforms are used, such as triangular or square waves.

Used generically, AC refers to the form in which electricity is delivered to businesses and residences. However, audio and radio signals carried on electrical wire are also examples of alternating current. In these applications, an important goal is often the recovery of information encoded (or modulated) onto the AC signal. 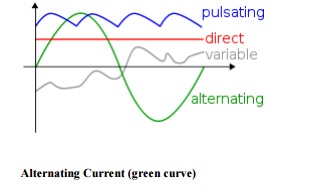 The average value of an AC waveform is NOT the same value as that for a DC waveforms average value. This is because the AC waveform is constantly changing with time and the heating effect given by the formula ( P = I 2.R ), will also be changing producing a positive power consumption. The equivalent average value for an alternating current system that provides the same power to the load as a DC equivalent circuit is called the "effective value". This effective power in an alternating current system is therefore equal to: ( I2.R.Average ).

As power is proportional to current2 Avesquared,. Therefore, the effective current in an AC system is called the Root Mean Squared or R.M.S.

An RLC circuit (or LCR circuit) is an electrical circuit consisting of a resistor, an inductor, and a capacitor, connected in series. I is the current through the circuit. 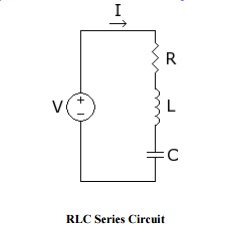 DIFFERENCE BETWEEN AC AND DC:

One complete set of positive and negative  values of an alternating quantity is called cycle.

The number of cycles made by an alternating quantity per second is called frequency. The unit of frequency is Hertz(Hz)

The maximum positive or negative value of an alternating quantity is called amplitude or peak value.

This is the average of instantaneous values of an alternating quantity over one complete cycle of the wave.

Where,  Im is the maximum value. 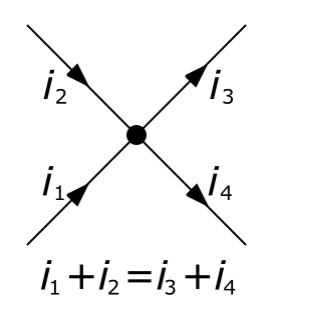 In any closed circuit or mesh, the algebraic sum of all the electromotive forces and the voltage drops is equal to zero. 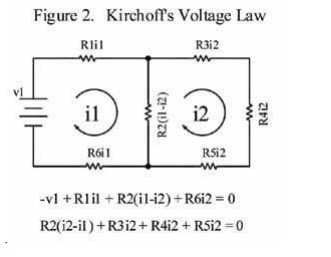 A current of 0.5 A is flowing through the r between its ends.

A supply voltage of 220V is applied to a flowing through it.

Calculate the resistance of the conductor if a current of 2A flows through it when the potential difference across its ends is 6V.

Calculate the current and resistance of a 100 W ,200V electric bulb.

Calculate the power rating of the heater coil when used on 220V supply taking 5 Amps.

In the circuit shown in fig .find the current, voltage drop across each resistor and the power dissipated in each resistor.

Three resistances of values 2Ω,3Ω and 5Ω are co supply .Calculate (a) equivalent resistance of the circuit (b) the total current of the

A lamp can work on a 50 volt mains taking 2 amps.What value of the resistance must be connected in series with it so that it can be operated from 200 volt mains giving the same power.

Circuit current I = 2A