Energy, therefore heat, is produced in the body by metabolic processes. The temperature control mechanism in the brain is responsible for maintaining normal oral temperature at between 36 and 37,28 C, regardless of fluctuation in the outside temperature. Rectal temperature is about 0,3 to 0,48 C higher. Heat is spread through the whole body by the circulation and is then lost during different processes:

·              conduction from the body to other substances or materials in contact with it  -   this is not important in the living person, but becomes important post mortem (eg heat transmitted and lost when a body is lying on a cold cement floor)

·              convection or the process by which the air in immediate contact with a warmer body is heated and expands in volume, becomes lighter (less dense), rises and is replaced by colder and denser air

When the person dies and the circulation ceases, this internal spread or diffusion of heat no longer takes place. The body surface cools off while the deep or so-called core temperature is still maintained for some time. At death certain metabolic processes still continue for some time, especially in the liver and the muscles, thus producing heat. The core temperature (which is usually taken in the rectum or just beneath the liver) will thus not fall immediately, but remain constant while the surface temperature already starts dropping. The drop in the core temperature will therefore start later when a gradient between core and surface has been established.

In the assessments it is therefore important that the core temperature is measured and applied.

There are a number of formulae or normograms of body temperature that can be used to determine the moment of death, but they should not be applied conclusively; only as guidelines.

Certain conditions during life such as infections, reactions to medications, etcetera, can cause fever and thus a rise in body temperature. Hypothermia (subnormal body temperature) will have the opposite effect. According to the formulae used, body temperature at the moment of death is regarded as 36,9 8C. 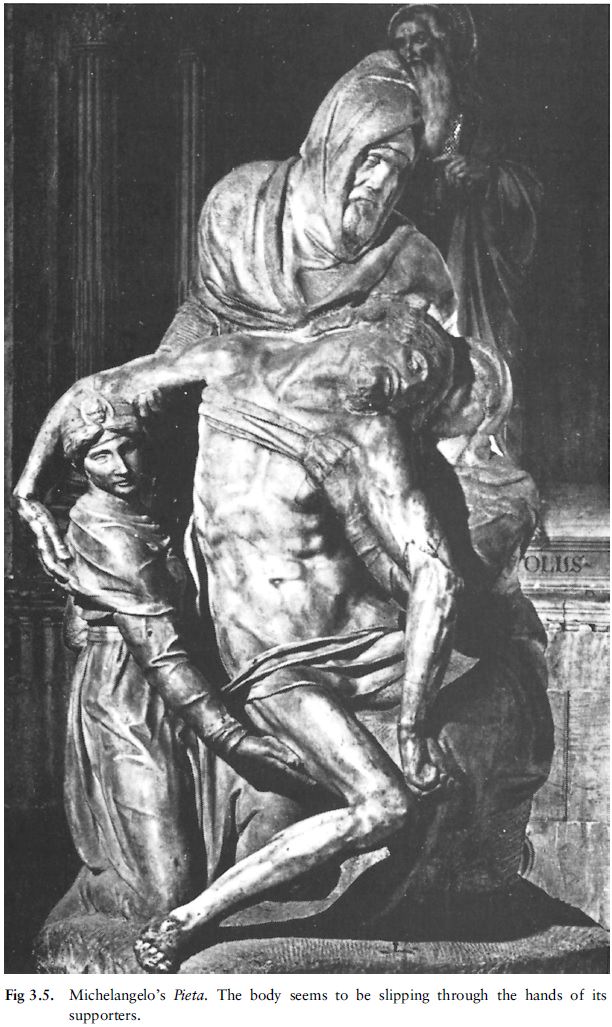 Fat provides good insulation against heat loss. An obese person therefore loses heat more slowly than a lean person. Babies also have a large body surface relative to their weight, and cool off more rapidly. Especially the surface of a baby's head is disproportionately large compared to the rest of the body. Oedema and dehydration also have an effect; heat loss is more rapid in a dehydrated person.

Any position which minimises the area of the body surface exposed to air or a cold surface will slow down the cooling process. A body curled up in the foetal position will therefore cool off more slowly than a stretched-out body, all the other factors being the same.

Air in motion can precipitate cooling, as it accelerates convection and conduction. This is also called the wind factor. Humid air promotes heat loss.

f Clothing and other coverings

g Medium in which body lies

A body lying in water loses body heat more rapidly than one outside due to greater heat loss as a result of increased convection and conduction in water as opposed to air. The type of water (fresh water or sea water) plays no role; only the temperature of the water. Sewage water may have a higher temperature due to heat produced by micro-organisms.

The muscles of the body go through three phases after death.

·              Primary muscle flaccidity occurs immediately at death, as a result of loss of muscle tone. The body becomes limp. An exception, the so-called cataleptic stiffness (rigor) is discussed elsewhere.

·              Secondary muscle flaccidity commences at the onset of the putrefaction process when the muscles start to relax finally and permanently. 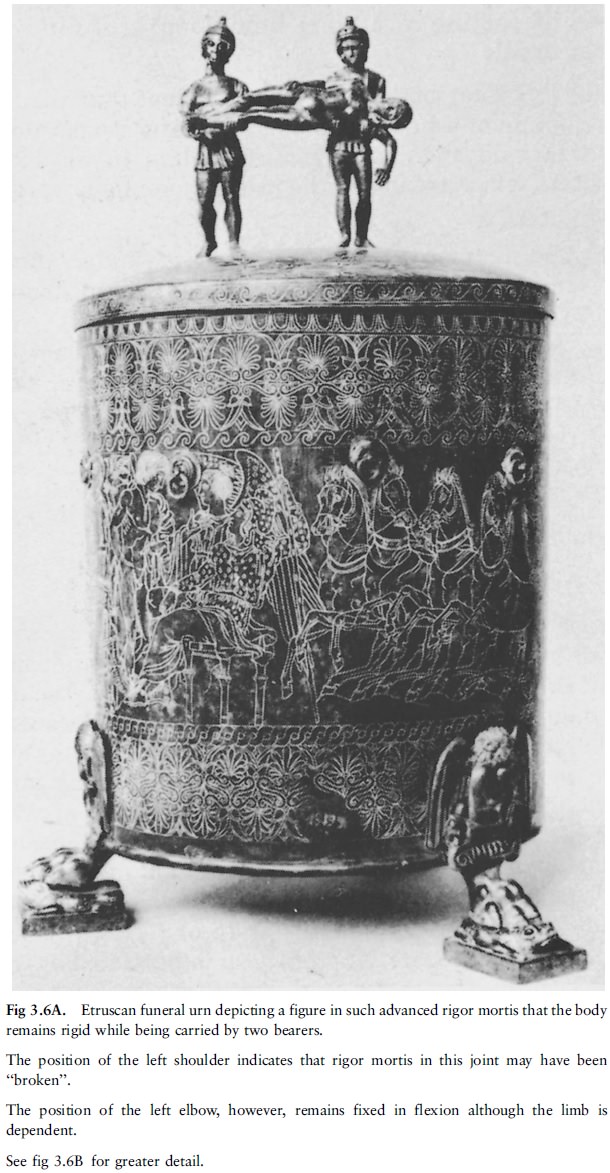 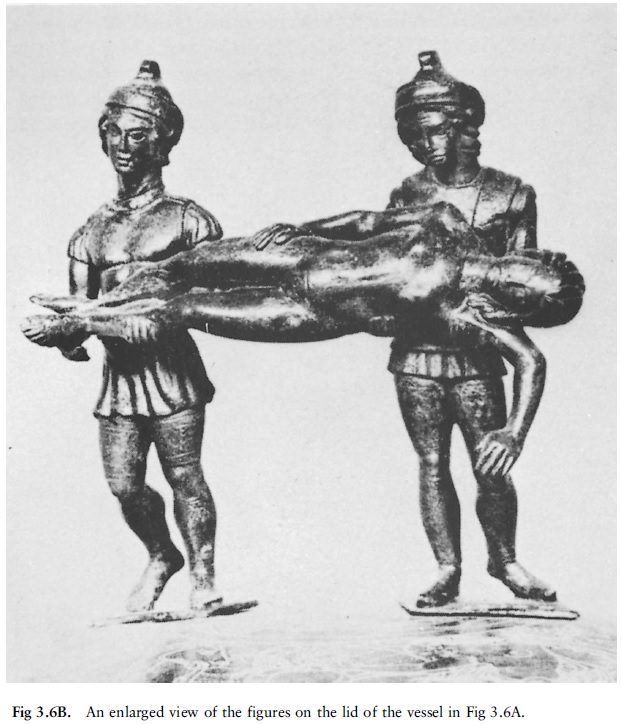 Rigor mortis occurs as a result of physio-chemical reactions in all the muscles of the body due to a decrease in adenosine triphosphate (ATP). ATP is required for both muscle contraction and relaxation. At death the muscles continue consuming ATP. Simultaneously lactate (milk acid) is produced by anaerobic (oxygen-independent) respiration. The decreased ATP levels as well as the changed pH levels result in rigor mortis.

Rigor mortis usually sets in 3 to 6 hours after death. It is first observed in the smaller muscles which, inter alia, are connected to smaller joints such as in the hands and face, and can therefore easily be immobilised. The arms and thorax follow and eventually the large muscles of the feet and legs. Rigor mortis usually spreads throughout the body after 10 to 12 hours and disappears after approximately 36 hours. It is generally accepted that rigor mortis disappears in the same sequence in which it has set in, namely first the groups of smaller muscles, followed by the groups of muscles gradually increasing in size.

Rigor mortis is not associated with shortening (contraction) of the muscles. Therefore the limb joints do not bend or flex under the influence of rigor mortis. Please note that the so-called boxer's or pugilistic attitude in burnt bodies is the result of shortening of the muscles when the proteins or albumin coagulate and denaturate as a result of the heat.

In individuals with low muscle mass, like babies and emaciated persons, hardly any or no rigor mortis may develop.

Rigor mortis is not necessarily an indication of the posture/position of the body at the moment of death. It merely represents the position in which the body was at the time of the development of rigor mortis. Paradoxal rigor mortis is observed, for example, when a leg sticks out over a bed without being in contact with the floor; the body was thus apparently moved after rigor mortis had developed, otherwise the leg would have bent at the knee under the effect of gravity and would have become fixed in that position.

If rigor mortis is broken, it will not set in again. This occurs mostly during handling of the corpse, for example when the clothes are removed.

Factors which influence the appearance and disappearance of rigor mortis

b Muscle condition at the time of death

Strenuous pre-death exercising decreases the ATP content of the muscles and thus accelerates the onset as well as subsequent disappearance of rigor mortis. The same mechanism is relevant in deaths caused by electrocution or after convulsions as there is increased muscle activity and thus lower ATP levels at the time of death.

This condition sets in where the muscles which at the moment of somatic death are in a condition of normal contraction, stay in that condition during the whole period of cellular death, while the other muscles are in a state of primary flaccidity. Cataleptic stiffness (rigidity) will last till rigor mortis has set in in the other muscles, and will then disappear when rigor mortis disappears. Although it usually affects only one muscle group, like the hand muscles, it can sometimes affect more or even all the muscles.

This rare form of rigidity sets in when the person dies during a very stressful period and somatic death sets in very rapidly. It appears as if the continued contraction is due to the failure (for some obscure reason) of the chemical processes required for active muscle relaxation during cellular death.

In cataleptic stiffening there is thus no relaxation phase of the muscles. This type of stiffening has been seen in mountain climbers who fell to their death and in a last fruitless attempt grabbed at a branch; after death the branch was firmly grasped in the hand. The same applies to a small percentage of suicide cases, where the firearm was grasped in the hand. More extreme cases of cataleptic rigor have been noted in soldiers dying during a military charge.

Cataleptic spasm can be imitated after death if an object is placed in the hand in such a way that the onset of rigor mortis will clench it in a grip: The difference is that in cataleptic spasm only the hand that grips the object has stiffened; the other muscles are limp.

b Rigidity due to heat

When a body is exposed to heat, the proteins denaturate and coagulate (break up and solidify) in the muscles, and the muscles shorten. As the flexor muscles are bigger and stronger than the extensor (stretch) muscles, they dominate the smaller muscles, and the body takes on the typical posture of a boxer (fig 3.7). The shortening can be such that the muscles tear, also causing laceration wounds of the overlying skin and soft tissue.

Rigor mortis does not develop in muscles that stiffened due to heat, but the latter can set in after rigor mortis. 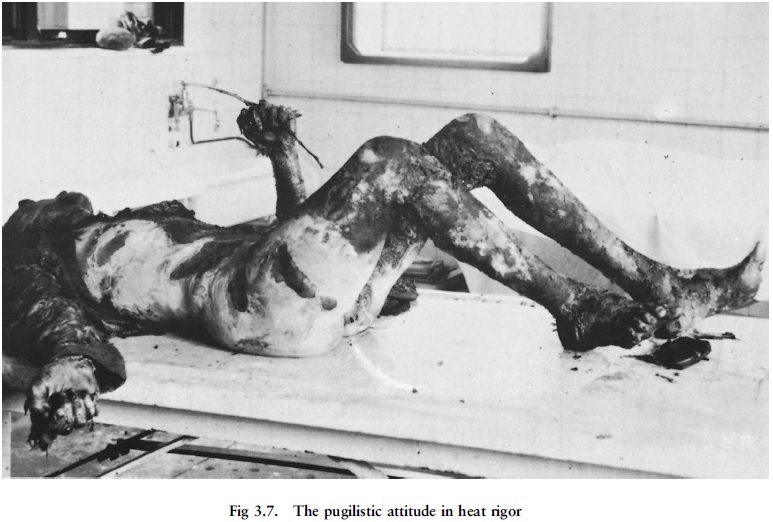 Heat stiffening and the concomitant body posture is therefore a post-mortem phenomenon, and not an indication of the body posture or position of the limbs at the time of death.

c Rigidity due to cold

Cold rigidity sets in when the body is exposed to temperatures under 3,5o C. Babies and young children have a thick subcutaneous layer of fat, and this rigidity is then often prominent because the fat ``stiffens'' and makes the body less flexible. This is also true of fat people where cold rigidity is more prominent than in slim persons. When the body later heats up, true rigor mortis can set in, although the ice crystals often damage the muscle cells and may prevent rigor mortis.

There are several synonyms for this condition, namely lividity, death spots and post-mortem discoloration. About one hour after death the blood in most bodies becomes permanently fluid because of the release of fibrinolysin from the endothelial lining of the blood vessels. The blood cells gravitate to the dependent or lowest parts of the body (fig 3.8A and B). This gravity-dependent movement of blood discolours the skin as well as internal organs to a reddish-blue colour. In a body in the hanging position the hypostasis will therefore appear in the hands/forearms and feet/lower legs. 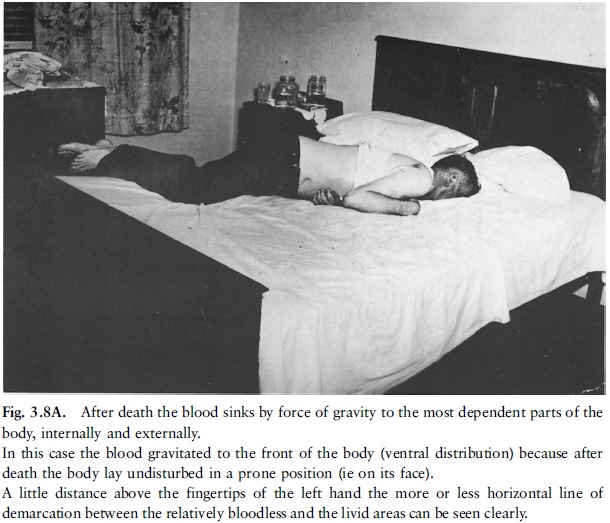 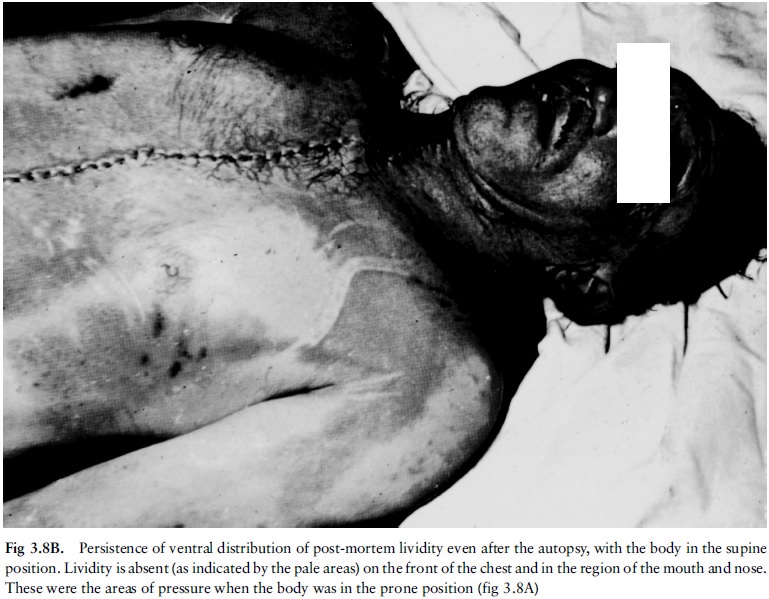 The fluid component of blood (plasma) also gravitates to a lesser extent and causes oedema and later even skin blistering. Sometimes the capillary veins can also rupture, and then petechial haemorrhages set in, which can converge and even form blood blisters. The colour of the complexion determines how readily hypostasis will be visible on the skin.

In a person who was exsanguinated (``bled out'') before death, this condition is often less obvious because of the fact that very little blood remained in the circulation. 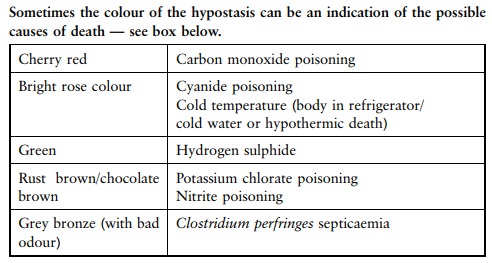 Hypostasis does not develop in areas where pressure is exerted on the body, in other words where the capillary veins are compressed by pressure. In the supine position the body will have no hypostatic changes over the buttocks, shoulders and the parts in contact with the surface on which it lies. It will not develop where a garment or buckle is tightly pressed against the body. Thus there will often be an area of peri-oral pallor around the mouth when the body lies prone with the head downwards, for instance on a pillow; it must not be confused with the application of force as in suffocation where pressure on the mouth is applied.

The time that it takes for hypostasis to develop varies. Sometimes it is already visible before death, for example in a person who is terminally in a state of cardiac failure with a slow blood circulation. Usually it is maximally developed 12 hours after death. 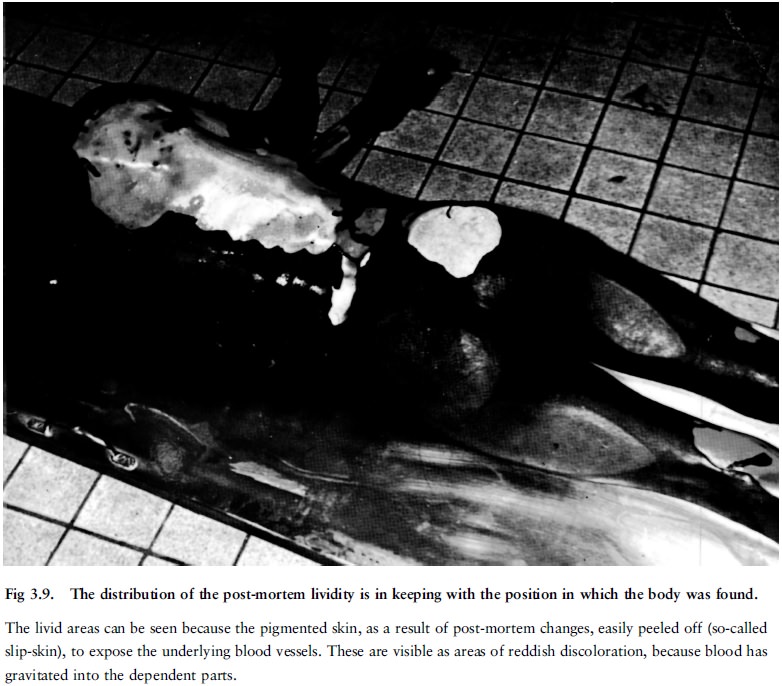 Conditions that have to be distinguished from hypostasis

The location and shape of a discoloration can distinguish it from hypostasis, but the indisputable evidence is only to be found when the skin is incised. In the case of a bruise the blood is extravasated (ie discharged from a vessel) or diffused into the tissue; in the case of hypostasis it is still limited to the vessels. Microscopy can be of further assistance if the naked eye cannot detect the difference.