Drug Use During Lactation

Despite the fact that most drugs are excreted into breast milk in amounts too small to adversely affect neonatal health, thou-sands of women taking medications do not breast-feed because of misperception of risk.

DRUG USE DURING LACTATION

Despite the fact that most drugs are excreted into breast milk in amounts too small to adversely affect neonatal health, thou-sands of women taking medications do not breast-feed because of misperception of risk. Unfortunately, physicians contribute heavily to this bias. It is important to remember that formula feed-ing is associated with higher morbidity and mortality in all socio-economic groups.

Most drugs administered to lactating women are detectable in breast milk. Fortunately, the concentration of drugs achieved in breast milk is usually low (Table 59–5). Therefore, the total amount the infant would receive in a day is substantially less than what would be considered a “therapeutic dose.” If the nursing mother must take medications and the drug is a relatively safe one, she should optimally take it 30–60 minutes after nursing and 3–4 hours before the next feeding. This allows time for many drugs to be cleared from the mother’s blood, and the concentra-tions in breast milk will be relatively low. Drugs for which no data are available on safety during lactation should be avoided or breast-feeding discontinued while they are being given. 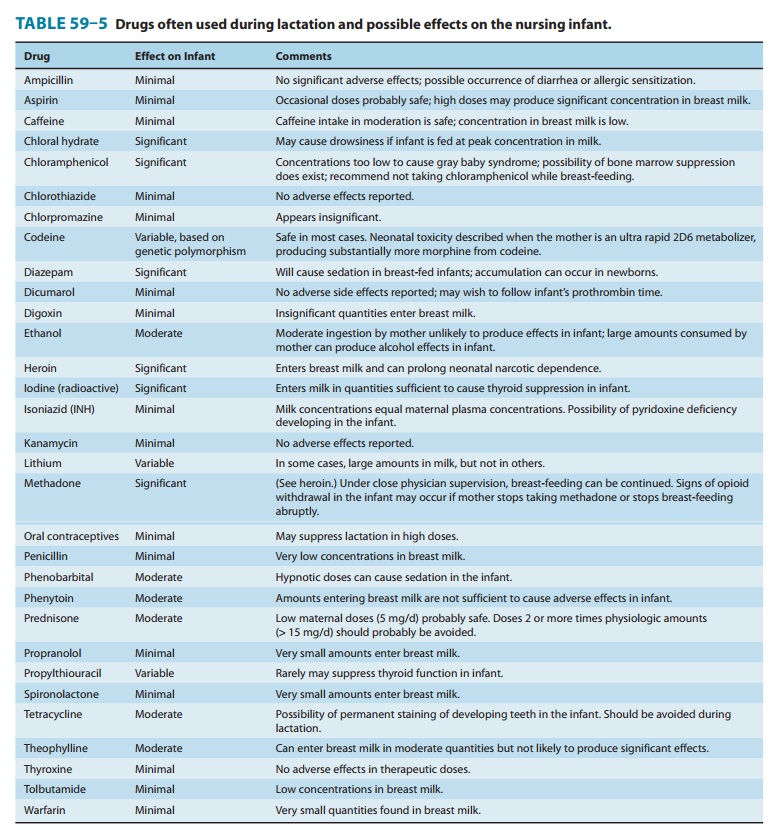 Most sedatives and hypnotics achieve concentrations in breast milk sufficient to produce a pharmacologic effect in some infants. Barbiturates taken in hypnotic doses by the mother can produce lethargy, sedation, and poor suck reflexes in the infant. Chloral hydrate can produce sedation if the infant is fed at peak milk concentrations. Diazepam can have a sedative effect on the nurs-ing infant, but, most importantly, its long half-life can result in significant drug accumulation.

Opioids such as heroin, methadone, and morphine enter breast milk in quantities potentially sufficient to prolong the state of neonatal narcotic dependence if the drug was taken chronically by the mother during pregnancy. If conditions are well controlled and there is a good relationship between the mother and the phy-sician, an infant could be breast-fed while the mother is taking methadone. She should not, however, stop taking the drug abruptly; the infant can be tapered off the methadone as the mother’s dose is tapered. The infant should be watched for signs of narcotic withdrawal. Although codeine has been believed to be safe, a recent case of neonatal death from opioid toxicity revealed that the mother was an ultra rapid metabolizer of cytochrome 2D6 substrates, producing substantially higher amounts of mor-phine. Hence, polymorphism in maternal drug metabolism may affect neonatal exposure and safety. A subsequent case control study has shown that this situation is not rare. The FDA has pub-lished a warning to lactating mothers to exert extra caution while using painkillers containing codeine.

Minimal use of alcohol by the mother has not been reported to harm nursing infants. Excessive amounts of alcohol, however, can produce alcohol effects in the infant. Nicotine concentrations in the breast milk of smoking mothers are low and do not produce effects in the infant. Very small amounts of caffeine are excreted in the breast milk of coffee-drinking mothers.

Lithium enters breast milk in concentrations equal to those in maternal serum. Clearance of this drug is almost completely depen-dent upon renal elimination, and women who are receiving lithium may expose the infant to relatively large amounts of the drug.

Radioactive substances such as iodinated 125I albumin and other forms of radioiodine can cause thyroid suppression in infants and may increase the risk of subsequent thyroid cancer as much as tenfold. Breast-feeding is contraindicated after large doses and should be withheld for days to weeks after small doses. Similarly, breast-feeding should be avoided in mothers receiving cancer chemotherapy or being treated with cytotoxic or immuno-modulating agents for collagen diseases such as lupus erythemato-sus or after organ transplantation.