Physiologic processes that influence pharmacokinetic variables in the infant change significantly in the first year of life, particularly during the first few months.

Physiologic processes that influence pharmacokinetic variables in the infant change significantly in the first year of life, particularly during the first few months. Therefore, special attention must be paid to pharmacokinetics in this age group. Pharmacodynamic differences between pediatric and other patients have not been explored in great detail and are probably small except for those specific target tissues that mature at birth or immediately thereaf-ter (eg, the ductus arteriosus).

Drug absorption in infants and children follows the same general principles as in adults. Unique factors that influence drug absorp-tion include blood flow at the site of administration, as deter-mined by the physiologic status of the infant or child; and, for orally administered drugs, gastrointestinal function, which changes rapidly during the first few days after birth. Age after birth also influences the regulation of drug absorption.

A. Blood Flow at the Site of Administration

Absorption after intramuscular or subcutaneous injection depends mainly, in neonates as in adults, on the rate of blood flow to the muscle or subcutaneous area injected. Physiologic conditions that might reduce blood flow to these areas are cardiovascular shock, vasoconstriction due to sympathomimetic agents, and heart failure. However, sick preterm infants requiring intramuscular injections may have very little muscle mass. This is further complicated by diminished peripheral perfusion to these areas. In such cases, absorption becomes irregular and difficult to predict, because the drug may remain in the muscle and be absorbed more slowly than expected. If perfusion suddenly improves, there can be a sudden and unpredictable increase in the amount of drug entering the circula-tion, resulting in high and potentially toxic concentrations of drug. Examples of drugs especially hazardous in such situations are cardiac glycosides, aminoglycoside antibiotics, and anticonvulsants.

Significant biochemical and physiologic changes occur in the neo-natal gastrointestinal tract shortly after birth. In full-term infants, gastric acid secretion begins soon after birth and increases gradu-ally over several hours. In preterm infants, the secretion of gastric acid occurs more slowly, with the highest concentrations appear-ing on the fourth day of life. Therefore, drugs that are usually partially or totally inactivated by the low pH of gastric contents should not be administered orally.

Gastric emptying time is prolonged (up to 6 or 8 hours) in the first day or so after delivery. Therefore, drugs that are absorbed primarily in the stomach may be absorbed more completely than anticipated. In the case of drugs absorbed in the small intestine, therapeutic effect may be delayed. Peristalsis in the neonate is irregular and may be slow. The amount of drug absorbed in the small intestine may therefore be unpredictable; more than the usual amount of drug may be absorbed if peristalsis is slowed, and this could result in potential toxicity from an otherwise standard dose. Table 59–3 summarizes data on oral bioavailability of various drugs in neonates compared with older children and adults. An increase in peristalsis, as in diarrheal conditions, tends to decrease the extent of absorption, because contact time with the large absorptive surface of the intestine is decreased. 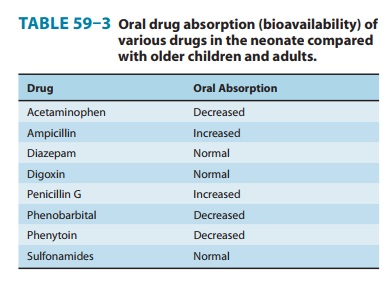 Gastrointestinal enzyme activities tend to be lower in the new-born than in the adult. Activities of α-amylase and other pancre-atic enzymes in the duodenum are low in infants up to 4 months of age. Neonates also have low concentrations of bile acids and lipase, which may decrease the absorption of lipid-soluble drugs.

As body composition changes with development, the distribution volumes of drugs are also changed. The neonate has a higher per-centage of its body weight in the form of water (70–75%) than does the adult (50–60%). Differences can also be observed between the full-term neonate (70% of body weight as water) and the small preterm neonate (85% of body weight as water). Similarly, extracellular water is 40% of body weight in the neo-nate, compared with 20% in the adult. Most neonates will experi-ence diuresis in the first 24–48 hours of life. Since many drugs are distributed throughout the extracellular water space, the size (vol-ume) of the extracellular water compartment may be important in determining the concentration of drug at receptor sites. This is especially important for water-soluble drugs (such as aminoglyco-sides) and less crucial for lipid-soluble agents.Preterm infants have much less fat than full-term infants. Total body fat in preterm infants is about 1% of total body weight, compared with 15% in full-term neonates. Therefore, organs that generally accumulate high concentrations of lipid-soluble drugs in adults and older children may accumulate smaller amounts of these agents in less mature infants.

Another major factor determining drug distribution is drug binding to plasma proteins. Albumin is the plasma protein with the greatest binding capacity. In general, protein binding of drugs is reduced in the neonate. This has been seen with local anesthetic drugs, diazepam, phenytoin, ampicillin, and phenobarbital. Therefore, the concentration of free (unbound) drug in plasma is increased initially.

Some drugs compete with serum bilirubin for binding to albu-min. Drugs given to a neonate with jaundice can displace biliru-bin from albumin. Because of the greater permeability of the neonatal blood-brain barrier, substantial amounts of bilirubin may enter the brain and cause kernicterus. This was in fact observed when sulfonamide antibiotics were given to preterm neonates as prophylaxis against sepsis. Conversely, as the serum bilirubin rises for physiologic reasons or because of a blood group incompatibil-ity, bilirubin can displace a drug from albumin and substantially raise the free drug concentration. This may occur without altering the total drug concentration and would result in greater therapeu-tic effect or toxicity at normal concentrations. This has been shown to happen with phenytoin.

The metabolism of most drugs occurs in the liver . The drug-metabolizing activities of the cytochrome P450-dependent mixed-function oxidases and the conjugating enzymes are substantially lower (50–70% of adult values) in early neonatal life than later. The point in development at which enzymatic activity is maximal depends upon the specific enzyme system in question. Glucuronide formation reaches adult values (per kilo-gram body weight) between the third and fourth years of life. Because of the neonate’s decreased ability to metabolize drugs, many drugs have slow clearance rates and prolonged elimination half-lives. If drug doses and dosing schedules are not altered appropriately, this immaturity predisposes the neonate to adverse effects from drugs that are metabolized by the liver. Table 59–4 demonstrates how neonatal and adult drug elimination half-lives can differ and how the half-lives of phenobarbital and phenytoin decrease as the neonate grows older. The process of maturation must be considered when administering drugs to this age group, especially in the case of drugs administered over long periods.Another consideration for the neonate is whether or not the mother was receiving drugs (eg, phenobarbital) that can induce early maturation of fetal hepatic enzymes. In this case, the ability of the neonate to metabolize certain drugs will be greater than expected, and one may see less therapeutic effect and lower plasma drug concentrations when the usual neonatal dose is given. During toddlerhood (12–36 months), the metabolic rate of many drugs exceeds adult values, often necessitating larger doses per kilogram than later in life. 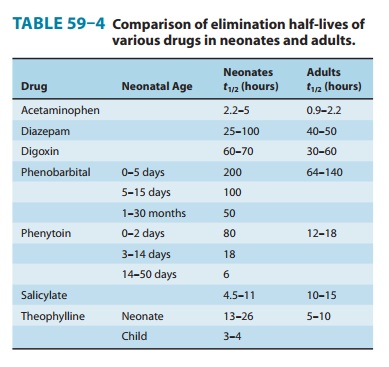 Although great focus is naturally concentrated on the neonate, it is important to remember that toddlers may have shorter elimi-nation half-lives of drugs than older children and adults, due probably to increased renal elimination and metabolism. For example, the dose per kilogram of digoxin is much higher in tod-dlers than in adults. The mechanisms for these developmental changes are still poorly understood.

Special Pharmacodynamic Features in the Neonate

The appropriate use of drugs has made possible the survival of neo-nates with severe abnormalities who would otherwise die within days or weeks after birth. For example, administration of indomethacin  causes the rapid closure of a patent ductus arterio-sus, which would otherwise require surgical closure in an infant with a normal heart. Infusion of prostaglandin E1, on the other hand, causes the ductus to remain open, which can be lifesaving in an infant with transposition of the great vessels or tetralogy of Fallot . An unexpected effect of such infusion has been described. The drug caused antral hyperplasia with gastric outlet obstruction as a clinical manifestation in 6 of 74 infants who received it. This phenomenon appears to be dose-dependent. Neonates are also more sensitive to the central depressant effects of opioids than are older children and adults, necessitating extra caution when they are exposed to some narcotics (eg, codeine) through breast milk.