The problem with single buffering is that there is a tremen-dous overhead in managing the buffer in terms of maintaining pointers, checking the pointers against water marks and so on.

The problem with single buffering is that there is a tremendous overhead in managing the buffer in terms of maintaining pointers, checking the pointers against water marks and so on. It would be a lot easier to separate the filling from the extraction. It removes many of the contention checks that are needed and greatly simplifies the design. This is the idea behind double buffering.

Care must be taken with the system to ensure that the buffer swap is performed correctly. In some cases, this can be done by passing the buffer pointer in the time period between filling the last entry and getting the next one. In others, water marks can be used to start the process earlier so that the extraction task may be passed to the second buffer pointer before it is completely filled. This allows it the option of accessing data in the buffer if needed instead of having to wait for the buffer to complete filling. This is useful when the extraction timing is not consistent and/or re-quires different amounts of data. Instead of making the buffers the size of the largest data structure, they can be smaller and the double buffering used to ensure that data can be supplied. In other words, the double buffering is used to give the appearance of the presence of a far bigger buffer than is really there. 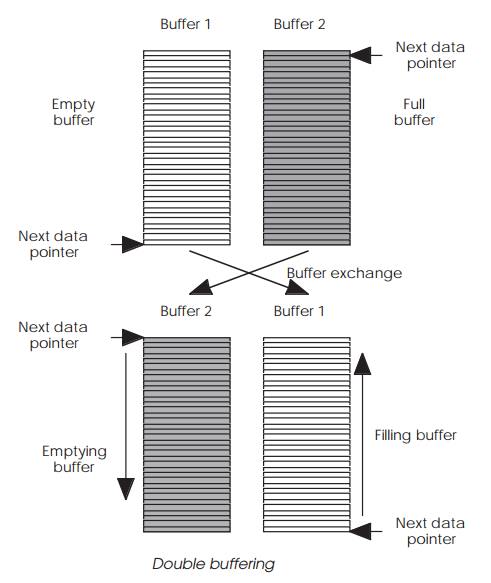