Divide and Conquer is one of the best-known general algorithm design technique. Divide-and-conquer algorithms work according to the following general plan:

Divide and Conquer is one of the best-known general algorithm design technique. Divide-and-conquer algorithms work according to the following general plan:

1.A problem's instance is divided into several smaller instances of the same problem, ideally of about the same size.

2.  The smaller instances are solved (typically recursively, though sometimes a different algorithm is employed when instances become small enough).

3.  If necessary, the solutions obtained for the smaller instances are combined to get a solution to the original problem.

The divide-and-conquer technique is diagrammed, which depicts the case of dividing a problem into two smaller sub problems, 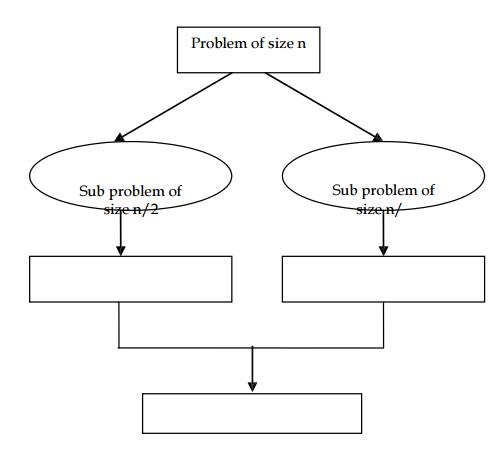 ♦  If n > 1, we can divide the problem into two instances of the same problem. They are To compute the sum of the first └ n/2┘numbers

we can add their values to get the sum in question. i.e.,

♦  More generally, an instance of size n can be divided into several instances of size nib, with a of them needing to be solved. (Here, a and b are constants; a≥1 and b > 1.).

♦  Assuming that size n is a power of b, to simplify our analysis, we get the following recurrence for the running time T(n).

♦ This is called the general divide and-conquer recurrence. Where f(n) is a function that accounts for the time spent on dividing the problem into smaller ones and on combining their solutions. (For the summation example, a = b = 2 and f (n) = 1.

♦ The time spent on executing the problem using divide and conquer is smaller then other methods.

♦ The divide and conquer approach provides an efficient algorithm in computer science.

♦ The divide and conquer technique is ideally suited for parallel computation in which each sub problem can be solved simultaneously by its own processor.

♦  Merge sort is a perfect example of a successful application of the divide-and conquer technique.

n/2┘..n - 1], sorting each of them recursively, and then merging the two smaller sorted arrays into a single sorted one.

STEPS TO BE FOLLOWED

♦ The first step of the merge sort is to chop the list into two.

♦ then split both the sub list into two and go on until each of the sub lists are of size one. 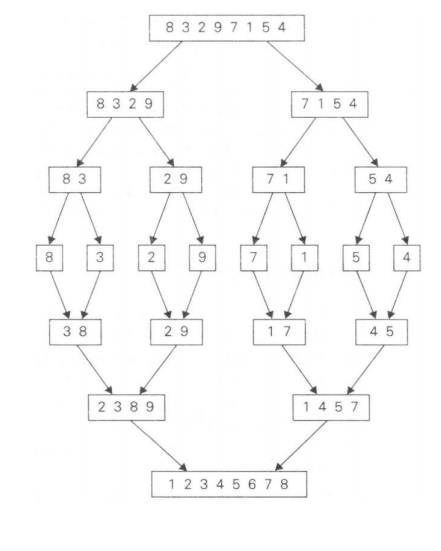 AN EXAMPLE OF MERGE SORT OPEERATION

♦  The merging of two sorted arrays can be done as follows. Two pointers (array indices) are initialized to point to the first elements of the arrays being merged.

♦  Then the elements pointed to are compared and the smaller of them is added to a new array or list being constructed.

♦   Then the index of the smaller element is incremented to point to its immediate successor in the array.

♦ Assume, n is a power of 2. Cmerge (n) is the number of key comparison performed during the merge sort.

♦  In the merging of two sorted array after one comparison is made the total number of elements in the two array still to be processed and sorted is reduced by one.

♦  Hence in the worst case neither of the two arrays becomes empty before the other one contains just one element . Therefore, for the worst case,

and we have the recurrence

Hence, according to the Master Theorem, C worst (n)  = (n log n) . In fact, it is easy to find the exact solution to the worst-case recurrence for n = 2k