Distributed shared memory (DSM) is an abstraction used for sharing data between computers that do not share physical memory.

Distributed shared memory (DSM) is an abstraction used for sharing data between computers that do not share physical memory. Processes access DSM by reads and updates to what appears to be ordinary memory within their address space. However, an underlying runtime system ensures transparently that processes executing at different computers observe the updates made by one another.

The main point of DSM is that it spares the programmer the concerns of message passing when writing applications that might otherwise have to use it. DSM is primarily a tool for parallel applications or for any distributed application or group of applications in which individual shared data items can be accessed directly. DSM is in general less appropriate in client-server systems, where clients normally view server-held resources as abstract data and access them by request (for reasons of modularity and protection). 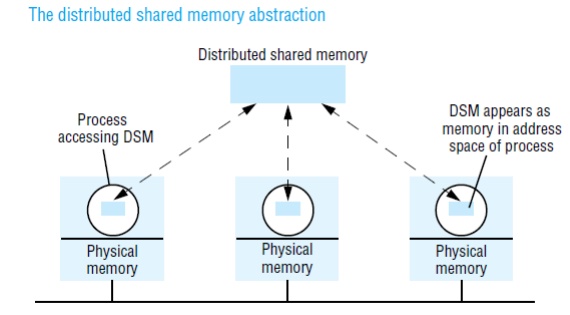 Message passing cannot be avoided altogether in a distributed system: in the absence of physically shared memory, the DSM runtime support has to send updates in messages between computers. DSM systems manage replicated data: each computer has a local copy of recently accessed data items stored in DSM, for speed of access.

In distributed memory multiprocessors and clusters of off-the-shelf computing components (see Section 6.3), the processors do not share memory but are connected by a very high-speed network. These systems, like general-purpose distributed systems, can scale to much greater numbers of processors than a shared-memory multiprocessor’s 64 or so. A central question that has been pursued by the DSM and multiprocessor research communities is whether the investment in knowledge of shared memory algorithms and the associated software can be directly transferred to a more scalable distributed memory architecture.

Under the message passing model, variables have to be marshalled from one process, transmitted and unmarshalled into other variables at the receiving process. By contrast, with shared memory the processes involved share variables directly, so no marshalling is necessary – even of pointers to shared variables – and thus no separate communication operations are necessary.

Experiments show that certain parallel programs developed for DSM can be made to perform about as well as functionally equivalent programs written for message passing platforms on the same hardware – at least in the case of relatively small numbers of computers (ten or so). However, this result cannot be generalized. The performance of a program based on DSM depends upon many factors, as we shall discuss below – particularly the pattern of data sharing.

Distributed shared memory is implemented using one or a combination of specialized hardware, conventional paged virtual memory or middleware:

Shared-memory multiprocessor architectures based on a NUMA architecture rely on specialized hardware to provide the processors with a consistent view of shared memory. They handle memory LOAD and STORE instructions by communicating with remote memory and cache modules as necessary to store and retrieve data.

Many systems, including Ivy and Mether , implement DSM as a region of virtual memory occupying the same address range in the address space of every participating process.

Some languages such as Orca, support forms of DSM without any hardware or paging support, in a platform-neutral way. In this type of implementation, sharing is implemented by communication between instances of the user-level support layer in clients and servers. Processes make calls to this layer when they access data items in DSM. The instances of this layer at the different computers access local data items and communicate as necessary to maintain consistency.

The synchronization model used to access DSM consistently at the application level; the DSM consistency model, which governs the consistency of data values accessed from different computers; the update options for communicating written values between computers; the granularity of sharing in a DSM implementation; and the problem of thrashing.

A DSM system is just such a replication system. Each application process is presented with some abstraction of a collection of objects, but in this case the ‘collection’ looks more or less like memory. That is, the objects can be addressed in some fashion or other. Different approaches to

DSM vary in what they consider to be an ‘object’ and in how objects are addressed. We consider three approaches, which view DSM as being composed respectively of contiguous bytes, language-level objects or immutable data items.

This type of DSM is accessed as ordinary virtual memory – a contiguous array of bytes. It is the view illustrated above by the Mether system. It is also the view of many other DSM systems, including Ivy.It allows applications (and language implementations) to impose whatever data structures they want on the shared memory. The shared objects are directly addressible memory locations (in practice, the shared locations may be multi-byte words rather than individual bytes). The only operations upon those objects are read (or LOAD) and write (or STORE). If x and y are two memory locations, then we denote instances of these operations as follows:

The shared memory is structured as a collection of language-level objects with higher-level semantics than simple read / write variables, such as stacks and dictionaries. The contents of the shared memory are changed only by invocations upon these objects and never by direct access to their member variables. An advantage of viewing memory in this way is that object semantics can be utilized when enforcing consistency.

When reading or taking a tuple from tuple space, a process provides a tuple specification and the tuple space returns any tuple that matches that specification – this is a type of associative addressing. To enable processes to synchronize their activities, the read and take operations both block until there is a matching tuple in the tuple space.

Many applications apply constraints concerning the values stored in shared memory. This is as true of applications based on DSM as it is of applications written for sharedmemory multiprocessors (or indeed for any concurrent programs that share data, such as operating system kernels and multi-threaded servers). For example, if a and b are two variables stored in DSM, then a constraint might be that a=b always. If two or moreprocesses execute the following code:

then an inconsistency may arise. Suppose a and b are initially zero and that process 1gets as far as setting a to 1. Before it can increment b, process 2 sets a to 2 and b to 1.

The local replica manager is implemented by a combination of middleware (the DSM runtime layer in each process) and the kernel. It is usual for middleware to perform the majority of DSM processing. Even in a page-based DSM implementation, the kernel usually provides only basic page mapping, page-fault handling and communication mechanisms and middleware is responsible for implementing the page-sharing policies. If DSM segments are persistent, then one or more storage servers (for example, file servers) will also act as replica managers.

A DSM system is said to be sequentially consistent if for any execution there is some interleaving of the series of operations issued by all the processes that satisfies the following two criteria:

SC2: The order of operations in the interleaving is consistent with the program order in which each individual client executed them.

Coherence is an example of a weaker form of consistency. Under coherence, every process agrees on the order of write operations to the same location, but they do not necessarily agree on the ordering of write operations to different locations. We can think of coherence as sequential consistency on a locationby- location basis. Coherent DSM can be implemented by taking a protocol for implementing sequential consistency and applying it separately to each unit of replicated data – for example, each page.

This model exploits knowledge of synchronization operations in order to relax memory consistency, while appearing to the programmer to implement sequential consistency (at least, under certain conditions that are beyond the scope of this book). For example, if the programmer uses a lock to implement a critical section, then a DSM system can assume that no other process may access the data items accessed under mutual exclusion within it. It is therefore redundant for the DSM system to propagate updates to these items until the process leaves the critical section.

While items are left with ‘inconsistent’ values some of the time, they are not accessed at those points; the execution appears to be sequentially consistent.

Two main implementation choices have been devised for propagating updates made by one process to the others: write-update and write-invalidate. These are applicable to a variety of DSM consistency models, including sequential consistency. In outline, the options are as follows:

Write-update: The updates made by a process are made locally and multicast to all other replica managers possessing a copy of the data item, which immediately modify the data read by local processes. Processes read the local copies of data items, without the need for communication. In addition to allowing multiple readers, several processes may write the same data item at the same time; this is known as multiple-reader/multiple-writer sharing. 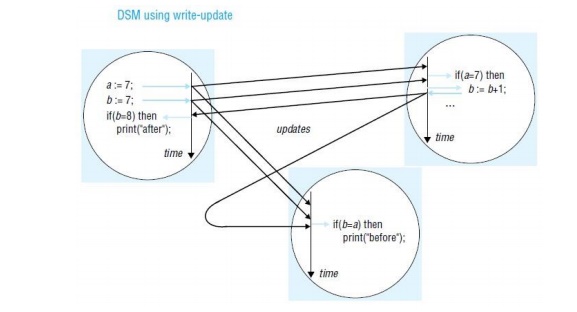 Write-invalidate: This is commonly implemented in the form of multiple-reader/ single-writer sharing. At any time, a data item may either be accessed in read-only mode by one or more processes, or it may be read and written by a single process. An item that is currently accessed in read-only mode can be copied indefinitely to other processes. When a process attempts to write to it, a multicast message is first sent to all other copies to invalidate them and this is acknowledged before the write can take place; the other processes are thereby prevented from reading stale data (that is, data that are not up to date). Any processes attempting to access the data item are blocked if a writer exists.

An issue that is related to the structure of DSM is the granularity of sharing. Conceptually, all processes share the entire contents of a DSM. As programs sharing DSM execute, however, only certain parts of the data are actually shared and then only for certain times during the execution. It would clearly be very wasteful for the DSM implementation always to transmit the entire contents of DSM as processes access and update it.

A potential problem with write-invalidate protocols is thrashing. Thrashing is said to occur where the DSM runtime spends an inordinate amount of time invalidating and transferring shared data compared with the time spent by application processes doing useful work. It occurs when several processes compete for the same data item, or for falsely shared data items.