Freckles are so common that to describe them seems unnecessary.

Some of these disorders are listed in Table 17.3. The most common will be described below and the mechan-isms involved are summarized in Fig. 17.7. 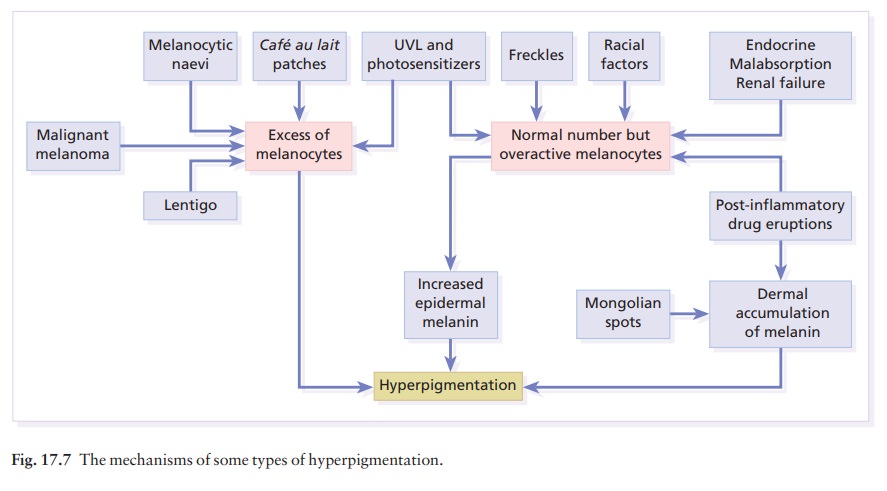 Freckles are so common that to describe them seems unnecessary. They are seen most often in the red-haired or blond person as sharply demarcated light brown-ginger macules, usually less than 5 mm in diameter. They multiply and become darker with sun exposure.

Increased melanin is seen in the basal layer of the epidermis without any increase in the number of melanocytes, and without elongation of the rete ridges (Fig. 17.8). No treatment is necessary.

Melanotic macule of the lip

This common lesion (Fig. 17.9) worries doctors but is benign. Its histology is similar to that of a freckle (Fig. 17.8). 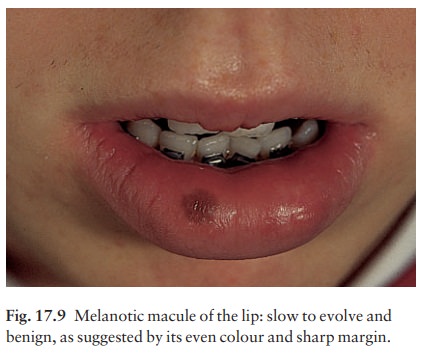 Simple and senile lentigines look alike. They are light or dark brown macules, ranging from 1 mm to 1 cm across. Although usually discrete, they may have an irregular outline. Simple lentigines arise most often in childhood as a few scattered lesions, often on areas not exposed to sun, including the mucous membranes. Senile or solar lentigines are common after middle age on the backs of the hands (‘liver spots’; Fig. 17.10) and on the face (Fig. 17.11) In contrast to freckles, lentigines have increased numbers of melanocytes. They should be distinguished from freckles, from junctional melanocytic naevi  and from a lentigo maligna. Treatment is usually unnecessary but melanin-specific high energy lasers (e.g. pigmented lesion dye laser, 510 nm; Q-switched ruby laser, 694 nm; Q-switched alexandrite laser, 755 nm) are extremely effective for treating ugly lesions. Liver spots associ-ated with actinic damage lighten or clear with the daily application of 0.1% tretinoin cream (Formulary 1) or 3% hydroquinone (Formulary 1). 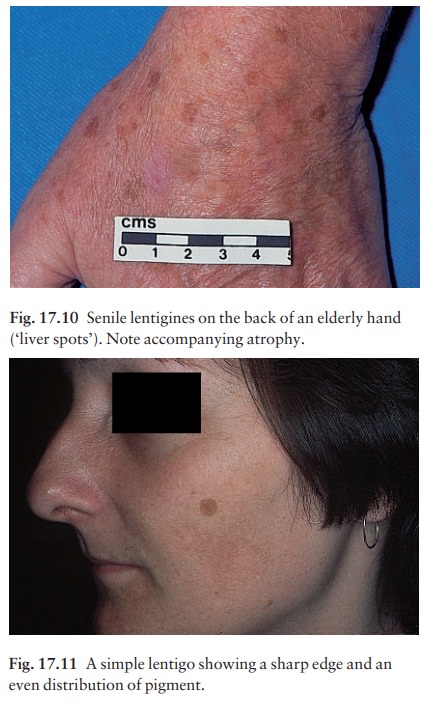 Profuse lentigines are seen on and around the lips in this autosomal dominant condition (Fig. 17.12). Scattered lentigines also occur on the buccal mucosa, gums, hard palate, hands and feet. The syndrome is important because of its association with polyposis of the small intestine, which may lead to recurrent intussusception and, rarely, to malignant transformation of the polyps. Ten per cent of affected women have ovarian tumours. 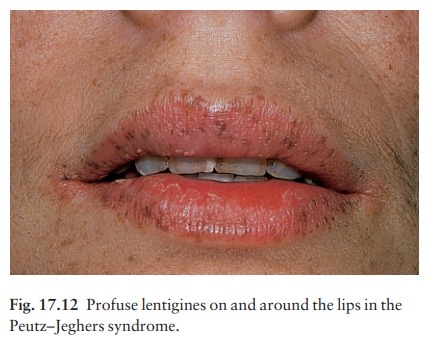 This consists of multiple lentigines on the backs of the hands and a more diffuse pigmentation of the palms and volar aspects of the fingers. It may also associate with gastrointestinal polyposis. Alopecia and nail abnormalities complete the rare but characteristic clinical picture.

This is an acronym for generalized Lentiginosis associ-ated with cardiac abnormalities demonstrated by ECG, Ocular hypertelorism, Pulmonary Stenosis, Abnormalgenitalia, Retardation of growth and Deafness.

Chloasma is a patterned pigmentation of the face occurring in women during pregnancy or when taking oral contraceptives. The areas of increased pigmenta-tion are well defined, symmetrical and their edges are often scalloped (the mask of pregnancy; Fig. 17.13). Most of the extra melanin lies in the epidermis, but there is some in the dermis too, making treatment more difficult. If the area is viewed under Wood’s light, an increase in contrast or in pigmentation sug-gests mainly epidermal pigmentation, whereas loss of contrast suggests dermal pigment. The light brown colour becomes darker after exposure to the sun. The placenta may secrete hormones that stimulate melanocytes. Chloasma should be differentiated from a phototoxic reaction to a scented cosmetic or to a drug. Treatment is unsatisfactory, although some find bleaching agents that contain hydroquinone helpful. The optimal effect is achieved with preparations con-taining 2–5% hydroquinone, applied for 6–10 weeks. After this, maintenance treatment should be with preparations containing no more than 2% hydro-quinone. A sunscreen will make the pigmentation less obvious during the summer and will minimize the chance of spread. 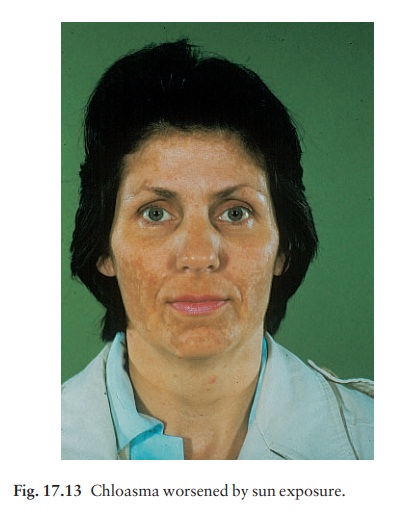 Hyperpigmentation caused by the overproduction of ACTH is often striking. It may be generalized or lim-ited to the skin folds, creases of the palms, scars and the buccal mucosa.

Increased ACTH production may cause a picture like that of Addison’s disease. The hyperpigmentation may become even more marked after adrenalectomy (Nelson’s syndrome).

The hyperpigmentation of chronic renal failure and of patients on haemodialysis is caused by an increase in levels of pituitary melanotrophic peptides, normally cleared by the kidney.

Any severe wasting disease, such as malabsorption, AIDS, tuberculosis or cancer, may be accompanied by diffuse hyperpigmentation. Kwashiorkor presents a mixed picture of generalized hypopigmentation and patchy postinflammatory hyperpigmentation, and in this condition the hair is red-brown or grey.

Table 16.2 lists drugs that commonly photosensitize. All can cause hyperpigmentation of the exposed skin. Psoralens are used in the photochemotherapy of pso-riasis  and, more rarely, of vitiligo.

The term ‘berloque dermatitis’ (Fig. 17.14) refers to a ‘pendant’ of hyperpigmentation, often on the side of the neck, where cosmetics have been applied which contain the photosensitizing 5-methoxypsoralen. Cosmetics for men (pre- and aftershaves, etc.) are a thriving source of these. 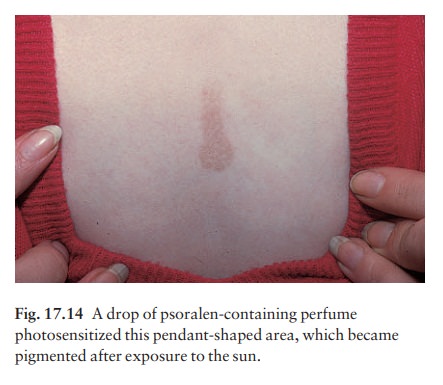 Arsenic is not used medically nowadays. Once it caused ‘raindrop’ depigmentation within a diffuse bronzed hyperpigmentation.

Busulfan and bleomycin, used to treat some forms of leukaemia, frequently cause diffuse hyperpigmen-tation but may also cause brown streaks (flagellate hyperpigmentation). Minocycline can leave blue-black drug deposits in inflamed acne spots on the shins or on the mucosae. They can be removed successfully with Q-switched ruby laser (694 nm) treatment.

This is common after lichen planus. It is also a feature of systemic sclerosis  and some types of cutaneous amyloidosis, and is often an unwelcome sequel of cryotherapy.

Poikiloderma is the name given to a triad of signs: reticulate pigmentation, atrophy and telangiectasia. It is not a disease but a reaction pattern with many causes including X-irradiation, photocontact reac-tions, and connective tissue and lymphoreticular dis-orders. Congenital variants (Rothmund–Thomson syndrome, Bloom’s syndrome and Cockayne’s syn-drome) associated with photosensitivity, dwarfism and mental retardation also occur.