Some conditions in which there is a lack of melanin are listed in Table 17.2.

Some conditions in which there is a lack of melanin are listed in Table 17.2.

In this condition, little or no melanin is made either in the skin and eyes (oculocutaneous albinism) or in the eyes alone (ocular albinismanot discussed further here). The prevalence of albinism of all types ranges from 1 in 20 000 in the USA and UK to 5% in some communities.

Roughly equal numbers of the two types are found in most communities, both being inherited as autosomal recessive traits. This explains how children with two albino parents can sometimes themselves be normally pigmented, the genes being complementary in the double heterozygote (Fig. 17.3).

The tyrosinase gene lies on chromosome 11q14-q21. More than 20 allelic variations have been found there in patients with tyrosinase-negative albinism. The gene for tyrosinase-positive human albinism has been mapped to chromosome 15q11-q13. It probably encodes for an ion channel protein in the melanosome involved in the transport of tyrosine.

The whole skin is white and pigment is also lacking in the hair, iris and retina (Fig. 17.3). Albinos have poor sight, photophobia and a rotatory nystagmus. As they grow older tyrosinase-positive albinos gain a little pigment in their skin, iris and hair. Negroid skin becomes yellow-brown and the hair becomes yellow. Albinos may also develop freckles. Sunburn is common on unprotected skin. As melanocytes are present, albinos have non-pigmented melano-cytic naevi and may develop amelanotic malignant melanomas. 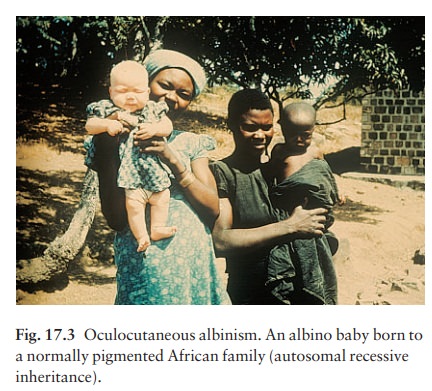 In the tropics these unfortunate individuals develop numerous sun-induced skin tumours even when they are young, confirming the protective role of melanin.

Piebaldism and vitiligo are described below.

Prenatal diagnosis of albinism is now possible but may not be justifiable in view of the good prognosis. A biopsy from fetal skin, taken at 20 weeks, is examined by electron microscopy for arrested melanosome development.

The hair bulb test, in which plucked hairs are incubated in dihydroxyphenylalanine, distinguishes tyrosinase-positive from tyrosinase-negative types. Those whose hair bulbs turn black (tyrosine-positive) are less severely affected.

Avoidance of sun exposure, and protection with opaque clothing, wide-brimmed hats and sunscreen creams (Formulary 1), are essential and allow albinos in temperate climates to live a relatively normal life. Early diagnosis and treatment of skin tumours is critical. In the tropics the outlook is less good and the termination of affected pregnancies may be considered.

These patients often have a white forelock of hair and patches of depigmentation lying symmetrically on the limbs, trunk and central part of the face, especially the chin. The condition is present at birth and is inherited as an autosomal dominant trait. A genetic abnormal-ity in mice (dominant white spotting) provided the clue that allowed the human piebaldism gene to be mapped to chromosome 4q12, where the KIT pro-tooncogene lies. This encodes the tyrosine kinase transmembrane cellular receptor on certain stem cells; without this they cannot respond to normal signals for development and migration. Melanocytes are absent from the hypopigmented areas. The depigmen-tation, often mistaken for vitiligo, may improve with age. There is no effective treatment. Waardenburg’s syndrome includes piebaldism (with a white forelock in 20% of cases), hypertelorism, a prominent inner third of the eyebrows, irides of different colour and deafness.

This rare metabolic cause of hypopigmentation has a prevalence of about 1 : 25 000.

The skin changes here may alert an astute physician to the diagnosis. The complexion has a pale, yellow tinge; there is thinning or loss of the sexual hair; the skin itself is atrophic. The hypopigmentation is caused by a decreased production of pituitary melan-otrophic hormones .

The word vitiligo comes from the Latin word vitellus, which means ‘veal’ (pale, pink flesh). It is an acquired circumscribed depigmentation, found in all races; its prevalence may be as high as 0.5–1%; its inheritance is polygenic.

There is a complete loss of melanocytes from affected areas. There are two main patterns: a common gener-alized one and a rare segmental type. Generalizedvitiligo, including the acrofacial variant, usually startsafter the second decade. There is a family history in 30% of patients and this type is most frequent in those with autoimmune diseases such as diabetes, thyroid disorders and pernicious anaemia. It is postulated that in this type melanocytes are the target of a cell-mediated autoimmune attack. Segmental vitiligo is restricted to one part of the body, but not necessarily to a dermatome. It occurs earlier than generalized vitiligo, and is not associated with autoimmune dis-eases. Trauma and sunburn can precipitate both types.

Generalized type. The sharply defined, usually sym-metrical (Fig. 17.4), white patches are especially common on the backs of the hands, wrists, fronts of knees, neck and around body orifices. The hair of the scalp and beard may depigment too. In Caucasoids, the surrounding skin is sometimes hyperpigmented. 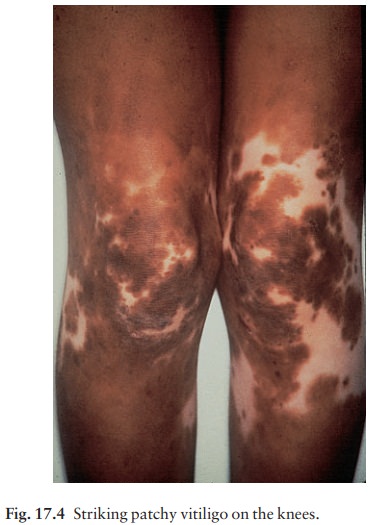 The course is unpredictable: lesions may remain static or spread; occasionally they repigment spontan-eously from the hair follicles.

Segmental type. The individual areas look like thegeneralized type but their segmental distribution is striking. Spontaneous repigmentation occurs more often in this type than in generalized vitiligo (Fig. 17.5). 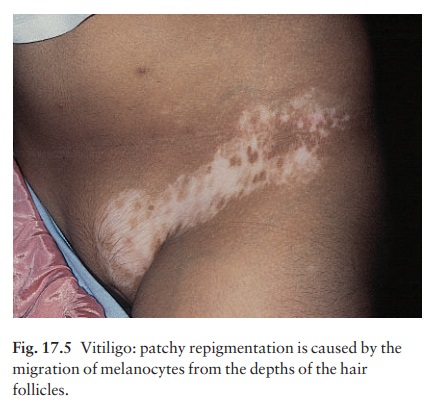 Contact with depigmenting chemicals, such as hydroquinones and substituted phenols in the rubber industry, should be excluded. Pityriasis versicolor  must be considered; its fine scaling and less complete pigment loss separate it from vitiligo. Postinflammatory depigmentation  may look very like vitiligo but is less white and improves spontaneously.

The patches of piebaldism are present at birth. Sometimes leprosy must be excludedaby sens-ory testing and a general examination. Other tropical diseases that cause patchy hypopigmentation are leishmaniasis, yaws and pinta.

Treatment is unsatisfactory. Recent patches may respond to a potent or very potent topical steroid, applied for 1–2 months. After this, the strength should be gradually tapered to a mildly potent steroid for maintenance treatment. Some patients improve with psoralens (trimethylpsoralen or 8-methoxypsoralen, in a dosage of 0.4–0.6 mg/kg body weight), taken 1–2 h before graduated exposure to natural sunshine or to artificial UVA (PUVA;). Narrow band (311 nm) UVB may also be effective. Therapy is given 2–3 times weekly for at least 6 months; new lesions seem to respond best. Autologous skin grafts are becoming popular in some centres although they remain experimental. The two most common pro-cedures are minigrafting (implants of 1 mm grafts from unaffected skin) and suction blister grafting (using the epidermal roofs of suction blisters from unaffected skin for grafting). Melanocyte and stem cell transplants, in which single cell suspensions are made from unaffected skin and applied to dermab-raded vitiliginous skin, are also being investigated. The use of these techniques may be limited by cost, and by the development of vitiligo (Köbner pheno-menon) at donor sites.

As a general rule, established vitiligo is best left untreated in most white people, although advice about suitable camouflage preparations (Formulary 1) to cover unsightly patches should be given. Sun avoidance and screening preparations (Formulary 1) are needed to avoid sunburn of the affected areas and a heightened contrast between the pale and dark areas. Black patients with extensive vitiligo can be completely and irreversibly depigmented by creams containing the monobenzyl ether of hydroquinone.

The social implications of this must be discussed and carefully considered, and written consent given before such treatment is undertaken.

This may follow eczema, psoriasis, sarcoidosis, lupus erythematosus and, rarely, lichen planus. It may also result from cryotherapy or a burn. In general, the more severe the inflammation, the more likely pigment is to decrease rather than increase in its wake. These prob-lems are most significant in Negroids or Asians. With time, the skin usually repigments. Pityriasis alba is common on the faces of children. The initial lesion is probably a variant of eczema (pinkish with fine scal-ing), which fades leaving one or more pale, slightly scaly, areas (Fig. 17.6). Exposure to the sun makes the patches more obvious. 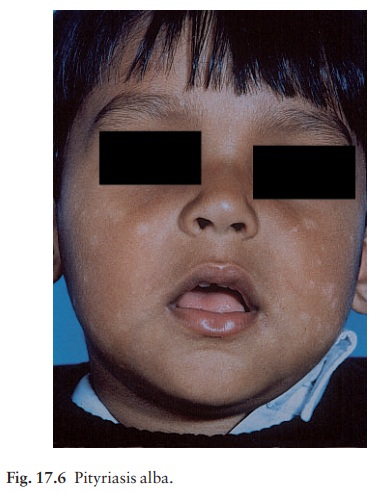 Melanocytes in hair bulbs become less active with age and white hair (canities) is a universal sign of ageing. Early greying of the hair is seen in the rare premature ageing syndromes, such as Werner’s syndrome, and in autoimmune conditions such as pernicious anaemia, thyroid disorders and Addison’s disease.