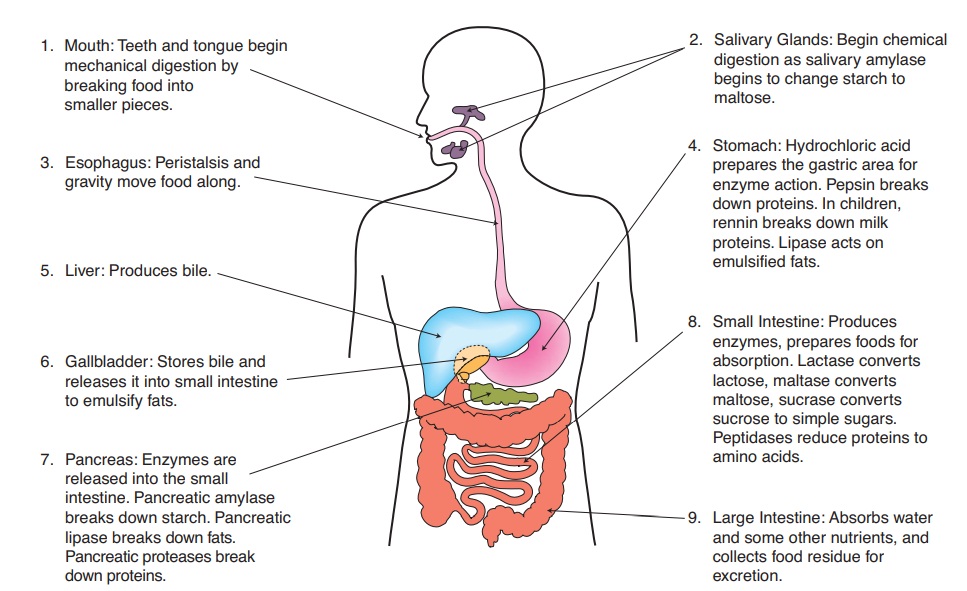 Digestion is the process whereby food is broken down into smaller parts,chemically changed, and moved through the gastrointestinal system.

Digestion is the process whereby food is broken down into smaller parts,chemically changed, and moved through the gastrointestinal system. The gas-trointestinal (GI) tract consists of the body structures that participate indigestion. Digestion begins in the mouth and ends at the anus. Along the entire GI tract secretions of mucus lubricate and protect the mucosal tissues. As the process of digestion is discussed, refer to Figure 3-1 and note the locations of the structures that perform the functions of digestion. 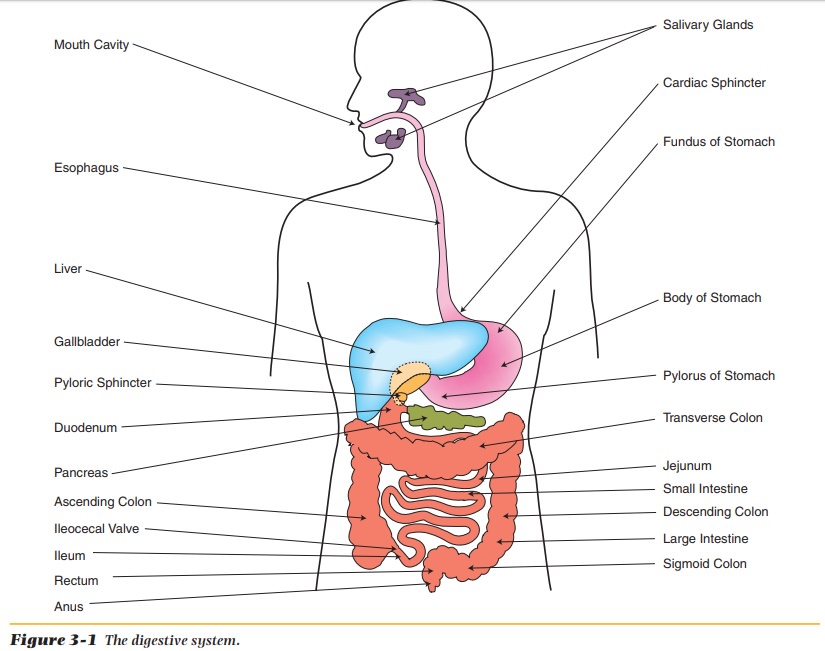 Digestion occurs through two types of action—mechanical and chemi-cal. During mechanical digestion, food is broken into smaller pieces by the teeth. It is then moved along the gastrointestinal tract through the esophagus, stomach, and intestines. This movement is caused by a rhythmic contraction of the muscular walls of the tract called peristalsis. Mechanical digestion helps to prepare food for chemical digestion by breaking it into smaller pieces. Several small pieces collectively have more surface area than fewer large ones and thus are more readily broken down by digestive juices.

During chemical digestion, the composition of carbohydrates, pro-teins, and fats is changed. Chemical changes occur through the addition of water and the resulting splitting, or breaking down, of the food molecules. This process is called hydrolysis. Food is broken down into nutrients that the tissues can absorb and use. Hydrolysis also involves digestive enzymes that act on food substances, causing them to break down into simple compounds. An enzyme can also act as a catalyst, which speeds up the chemical reactions without itself being changed in the process. Digestive enzymes are secreted by the mouth, stomach, pancreas, and small intestine (Table 3-1). An enzyme is often named for the substance on which it acts. For example, the enzyme sucrase acts on sucrose, the enzyme maltase acts on maltose, and lactase acts on lactose. 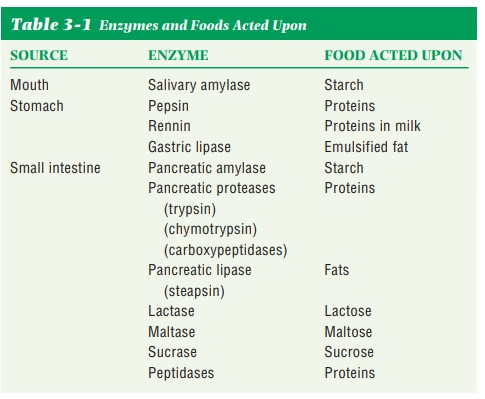 Digestion in the Mouth

Digestion begins in the mouth, where the food is broken into smaller pieces by the teeth and mixed with saliva (Figure 3-2). At this point, each mouthful of food that is ready to be swallowed is called a bolus. Saliva is a secretion of the salivary glands that contains water, salts, and a digestive enzyme called salivary amylase (also called ptyalin), which acts on complex carbo-hydrates (starch). Food is normally held in the mouth for such a short time that only small amounts of carbohydrates are chemically changed there. The salivary glands also secrete a mucous material that lubricates and binds food particles to help in swallowing the bolus. The final chemical digestion of carbohydrates occurs in the small intestine. 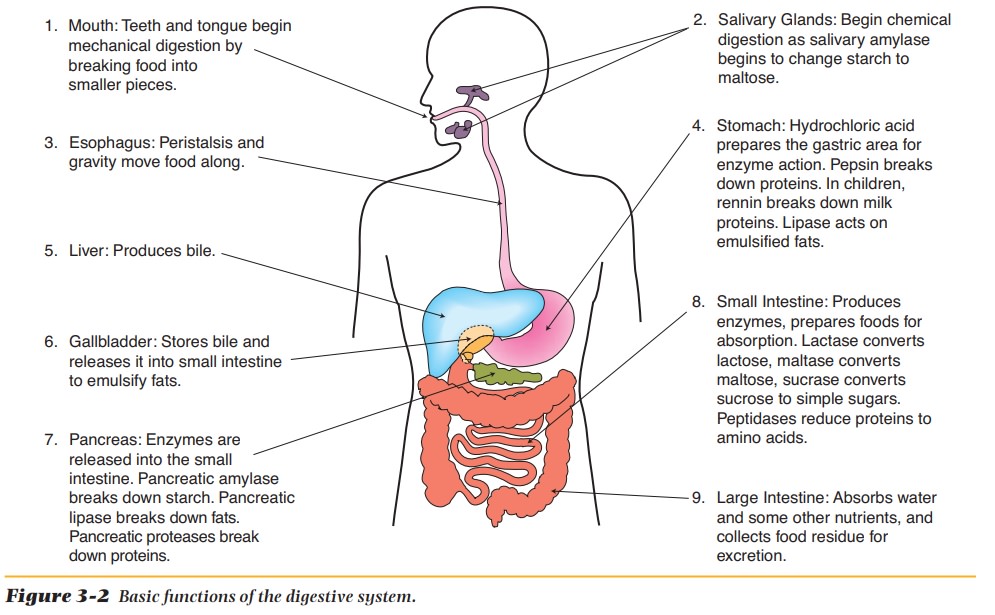 Digestion in the Stomach

The stomach consists of an upper portion known as the fundus, a middle area known as the body of the stomach, and the end nearest the small intestine called the pylorus. Food enters the fundus and moves to the body of the stom-ach, where the muscles in the stomach wall gradually knead the food, tear it, and mix it with gastric juices, and with the intrinsic factor necessary for the absorption of vitamin B12, before it can be propelled forward in slow, controlled movements. The food becomes a semiliquid mass called chyme (pronounced “kime”). When the chyme enters the pylorus, it causes distention and the re-lease of the hormone gastrin, which increases the release of gastric juices.Gastric juices are digestive secretions of the stomach. They containhydrochloric acid, pepsin, and mucus. Hydrochloric acid activates the enzyme pepsin, prepares protein molecules for partial digestion by pepsin, destroys most bacteria in the food ingested, and makes iron and calcium more soluble. As the hydrochloric acid is released, a thick mucus is also secreted to protect the stomach from this harsh acid. In children, there are two additional enzymes: rennin, which acts on milk protein and casein, and gastric lipase, which breaks the butterfat molecules of milk into smaller molecules.

In summary, the functions of the stomach include the following:

• Mixing of food with gastric juices

• Regulation of a slow, controlled emptying of food into the intestine

• Secretion of the intrinsic factor for vitamin B12

• Destruction of most bacteria inadvertently consumed

Digestion in the Small Intestine

When food reaches the small intestine, the hormone secretin causes the pancreas to release sodium bicarbonate to neutralize the acidity of the chyme. The gallbladder is triggered by the hormone cholecystokinin (CCK), which is pro-duced by intestinal mucosal glands when fat enters, to release bile. Bile is produced in the liver but stored in the gallbladder. Bile emulsifies fat after it is secreted into the small intestine. This action enables the enzymes to digest the fats more easily.

Chyme also triggers the pancreas to secrete its juice into the small intes-tine. Pancreatic juice contains the following enzymes:

• Trypsin, chymotrypsin, and carboxypeptidases split proteins intosmaller substances. These are called pancreatic proteases because they are protein-splitting enzymes produced by the pancreas.

The large intestine, or colon, consists of the cecum, colon, and rectum. The cecum is a blind pouchlike beginning of the colon in the right lower quadrant of the abdomen. The appendix is a diverticulum that extends off the cecum. Thececum is separated from the ileum by the ileocecal valve and is considered to be the beginning of the large intestine (colon). Its primary function is to absorb water and salts from undigested food. It has a muscular wall that can knead the contents to enhance absorption. One of the end products of fermentation in the cecum is volatile fatty acids. The major volatile fatty acids are acetate, propionate, and butyrate. These are absorbed from the large intestine and used as sources of energy. The digested food then enters the ascending colon and moves through the transverse colon and on to the descending colon, the sigmoid colon, the rectum, and, finally, the anal canal.