After digestion, the next major step in the body’s use of its food is absorption.

After digestion, the next major step in the body’s use of its food is absorp-tion (Figure 3-3). Absorption is the passage of nutrients into the blood or lymphatic system (the lymphatic vessels carry fat-soluble particles and molecules that are too large to pass through the capillaries into the bloodstream). 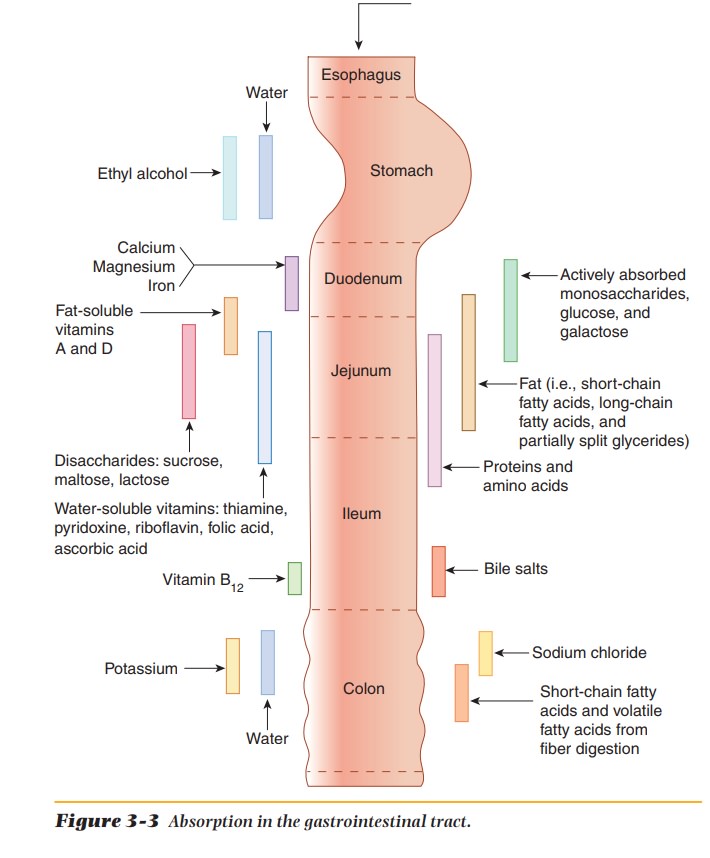 To be absorbed, nutrients must be in their simplest forms. Carbohydrates must be broken down to the simple sugars (glucose, fructose, and galactose), proteins to amino acids, and fats to fatty acids and glycerol. Most absorption of nutrients occurs in the small intestine, although some occurs in the large intes-tine. Water is absorbed in the stomach, small intestine, and large intestine.

The small intestine is approximately 22 feet long. Its inner surface has mucosal folds, villi, and microvilli to increase the surface area for maximum absorption. The fingerlike projections called villi have hundreds of microscopic, hairlike pro-jections called microvilli. The microvilli are very sensitive to the nutrient needs of our bodies (Figure 3-4). Each villus contains numerous blood capillaries (tiny blood vessels) and lacteals (lymphatic vessels). The villi absorb nutrients from the chyme by way of these blood capillaries and lacteals, which eventually transfer them to the bloodstream. Glucose, fructose, galactose, amino acids, minerals, and water-soluble vitamins are absorbed by the capillaries. Fructose and galactose are subsequently carried to the liver, where they are converted to glucose. Lacteals absorb glycerol and fatty acids (end products of fat digestion) in addition to the fat-soluble vitamins. 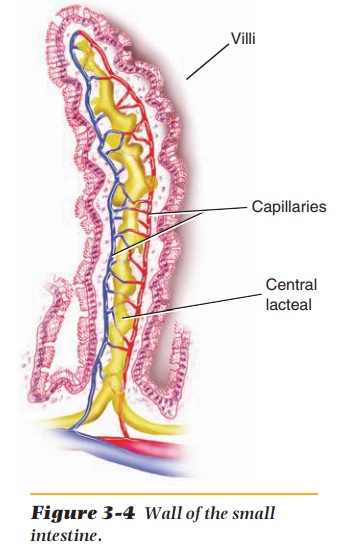 Absorption in the Large Intestine

When the chyme reaches the large intestine, most digestion and absorption have already occurred. The colon walls secrete mucus as a protection from the acidic digestive juices in the chyme, which is coming from the small intestine through the ileocecal valve.

The major tasks of the large intestine are to absorb water, to synthesize some B vitamins and vitamin K (essential for blood clotting), and to collect food residue. Food residue is the part of food that the body’s enzyme action cannot digest and consequently the body cannot absorb. Such residue is commonly called dietary fiber. Examples include the outer hulls of corn kernels and grains of wheat, celery strings, and apple skins. It is important that the diet contain adequate fiber because it promotes the health of the large intestine by helping to produce softer stools and more frequent bowel movements.

Undigested food is excreted as feces by way of the rectum. In healthy people, 99% of carbohydrates, 95% of fat, and 92% of proteins are absorbed.