Food Patterns Based on Religion or Philosophy

FOOD PATTERNS BASED ON RELIGION OR PHILOSOPHY

Interpretations of the Jewish dietary laws vary. Persons who adhere to the Orthodox view consider tradition important and always observe the dietary laws. Foods prepared according to these laws are called kosher (Figure 2-23). Conservative Jews are inclined to observe the rules only at home. Reform Jews consider their dietary laws to be essentially ceremonial and so minimize their significance. Essentially the laws require the following:

• Slaughtering must be done by a qualified person in a prescribedmanner. The meat or poultry must be drained of blood, first by severing the jugular vein and carotid artery, then by soaking in brine before cooking.

• Meat and meat products may not be prepared with milk or milkproducts.

• The dishes used in the preparation and serving of meat productsmust be kept separate from those used for dairy foods. 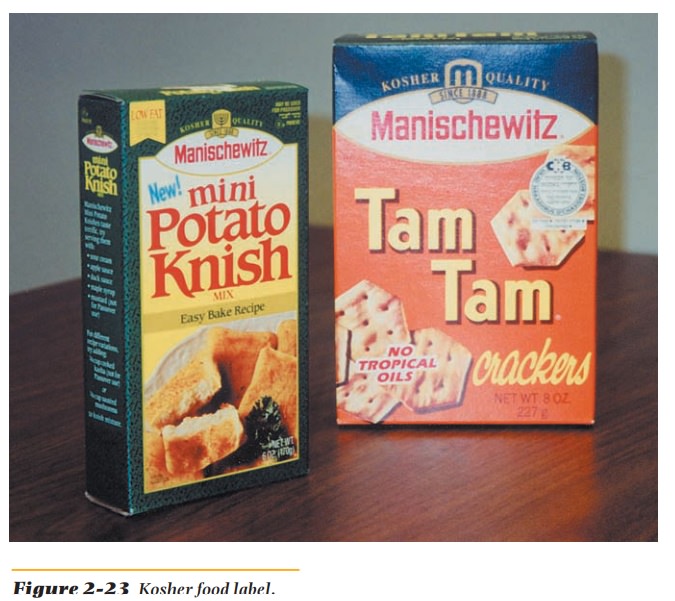 • The mouth must be rinsed after eating fish and before eating meat.

• There are prescribed fast days: Passover Week, Yom Kippur, and the Feast of Purim.

• No cooking is done on the Sabbath, from sundown Friday tosundown Saturday.

Jewish dietary laws forbid the eating of the following:

• Hindquarters of any animal

• Shellfish or fish without scales or fins

• Leavened (contains ingredients that cause it to rise) bread duringthe Passover

In general, the food served is rich. Chicken and fresh-smoked and salted fish are popular, as are noodles, eggs, and flour dishes. These diets can be defi-cient in fresh vegetables and milk.

Although the dietary restrictions of the Roman Catholic religion have been lib-eralized, meat is not allowed on Ash Wednesday and Good Friday, but the pope requests adherents to abstain on the other Fridays during Lent.

The Eastern Orthodox religion includes Christians from the Middle East, Russia, and Greece. Although interpretations of the dietary laws vary, meat, poultry, fish, and dairy products are restricted on Wednesdays and Fridays and during Lent and Advent.

In general, Seventh-Day Adventists are lacto-ovo vegetarians, which means they use milk products and eggs but no meat, fish, or poultry. They may also use nuts, legumes, and meat analogues (substitutes) and tofu. They consider coffee, tea, and alcohol to be harmful.

The only dietary restriction observed by the Mormons is the prohibition of cof-fee, tea, and alcoholic beverages.

Adherents of Islam are called Muslims. Their dietary laws prohibit the use of pork and alcohol, and other meats must be slaughtered according to specific laws. During the month of Ramadan, Muslims do not eat or drink during day-light hours.

To the Hindus, all life is sacred, and animals contain the souls of ancestors. Consequently, most Hindus are vegetarians. They do not use eggs because eggs represent life.