As indicated above, weight loss for the obese client with hypertension usually lowers blood pressure, and thus a calorie-restricted diet might be prescribed.

As indicated above, weight loss for the obese client with hypertension usually lowers blood pressure, and thus a calorie-restricted diet might be prescribed. A sodium-restricted diet frequently is prescribed for clients with hypertension. Certain ethnic groups, such as African Americans with new onset of HTN and those already diagnosed with HTN, should limit sodium intake to 1,500 mg/day. A discussion of this diet follows. When diuretics are prescribed together with a sodium-restricted diet, the client may lose potassium via the urine and, thus, be advised to increase the amount of potassium-rich foods in the diet (see Table 18-4). 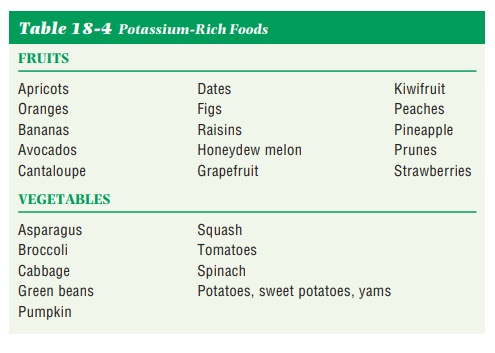 A sodium-restricted diet is a regular diet in which the amount of sodium is limited. Such a diet is used to alleviate edema and hypertension. Most people obtain far too much sodium from their diets. It is estimated that the average adult consumes 7 grams of sodium a day. A committee of the Food and Nutrition Board recommends that the daily intake of sodium be limited to no more than 2,300 mg (2.3 grams), and the Board itself set a safe minimum at 500 mg/day for adults (see Table 8-6). Sodium is found in food, water, and medicine.

It is impossible to have a diet totally free of sodium. Meats, fish, poultry, dairy products, and eggs all contain substantial amounts of sodium natu-rally. Cereals, vegetables, fruits, and fats contain small amounts of sodium naturally. Water contains varying amounts of sodium. However, sodium often is added to foods during processing and cooking and at the table. The food label should indicate the addition of sodium to commercial food products. In some of these foods, the addition of sodium is obvious because one can taste it, as in prepared dinners, potato chips, and canned soups. In others, it is not. The following are examples of sodium-containing products frequently added to foods that the consumer may not notice.

• Salt (sodium chloride)—used in cooking or at the table and in canning and processing.

• Monosodium glutamate(calledMSGand sold under severalbrand names)—a flavor enhancer used in home, restaurant, and hotel cooking and in many packaged, canned, and frozen foods.

• Baking soda (sodium bicarbonate)—used to leaven breads andcakes; sometimes added to vegetables in cooking or used as an “alkalizer” for indigestion.

• Brine (table salt and water)—used in processing foods to inhibitgrowth of bacteria; in cleaning or blanching vegetables and fruits; in freezing and canning certain foods; and for flavor, as in corned beef, pickles, and sauerkraut.

• Disodium phosphate—present in some quick-cooking cereals and processed cheeses.

• Sodium alginate—used in many chocolate milks and ice creams for smooth texture.

• Sodium benzoate—used as a preservative in many condiments such as relishes, sauces, and salad dressings.

• Sodium hydroxide—used in food processing to soften and loosen skins of ripe olives, hominy, and certain fruits and vegetables.

• Sodium propionate—used in pasteurized cheeses and in some breads and cakes to inhibit growth of mold.

• Sodium sulfite—used to bleach certain fruits in which an artificial coloris desired, such as maraschino cherries and glazed or crystallized fruit; also used as a preservative in some dried fruit, such as dried plums.

Because the amount of sodium in tap water varies from one area to another, the local department of health or the American Heart Association affiliate should be consulted if this information is needed. Softened water always has additional sodium. If the sodium content of the water is high, the client may have to use bottled water.

Some over-the-counter medicines contain sodium. A client on a sodium-restricted diet should obtain the physician’s permission before using any medication or salt substitute. Many salt substitutes contain potassium, which can affect the heartbeat.

Sodium-restricted diets range from “different” to “tasteless” because most people are accustomed to salt in their food. It can be difficult for the client to understand the necessity for following such a diet, particularly if it must be followed for the remainder of his or her life. If the physician allows, it will help the client adjust if the sodium content of the diet can be reduced gradually.

It is helpful, too, to remind the client of the numerous herbs, spices, and flavorings allowed on sodium-restricted diets (Table 18-5). Clients will also find it useful to practice ordering from a menu so as to learn to choose those foods lowest in sodium content. 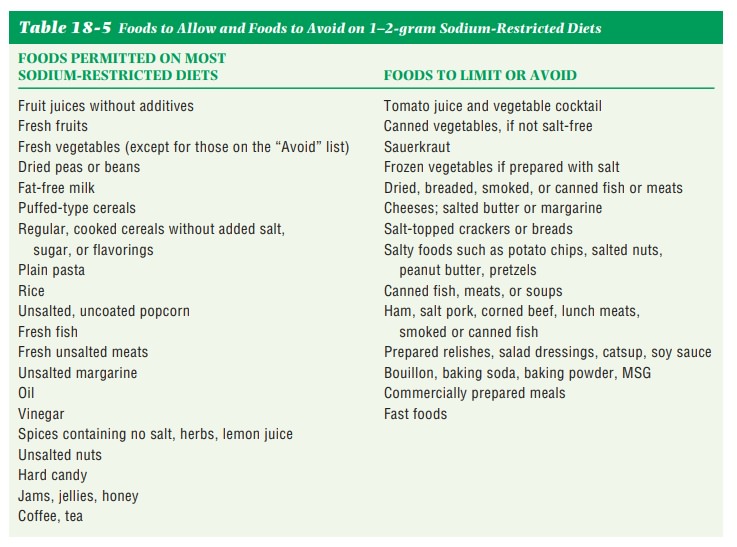