The energy liberated from each gram of carbohydrate as it is oxidized to carbon dioxide and water is 4.1 Calories (1 Calorie equals 1 kilocalorie), and that liberated from fat is 9.3 Calories.

The energy liberated from each gram of carbohydrate as it is oxidized to carbon dioxide and water is 4.1 Calories (1 Calorie equals 1 kilocalorie), and that liberated from fat is 9.3 Calories. The energy liberated from metabolism of the average dietary protein as each gram is oxidized to carbon dioxide, water, and urea is 4.35 Calories. Also, these substances vary in the average percentages that are absorbed from the gastrointestinal tract: about 98 per cent of carbohydrate, 95 per cent of fat, and 92 per cent of protein. Therefore, the averagephysiologically available energy in each gram of these three foodstuffs is as follows:

Average Americans receive about 15 per cent of their energy from protein, 40 per cent from fat, and 45 per cent from carbohydrate. In most non-Western coun-tries, the quantity of energy derived from carbohydrates far exceeds that derived from both proteins and fats. Indeed, in some parts of the world where meat is scarce, the energy received from fats and proteins combined may be no greater than 15 to 20 per cent.

Table 71–1 gives the compositions of selected foods, demonstrating especially the high proportions of fat and protein in meat products and the high proportion of car-bohydrate in most vegetable and grain products. Fat is deceptive in the diet because it usually exists as 100 per cent fat, whereas both proteins and carbohydrates are mixed in watery media so that each of these normally represents less than 25 percent of the weight. Therefore, the fat of one pat of butter mixed with an entire helping of potato sometimes con-tains as much energy as the potato itself. 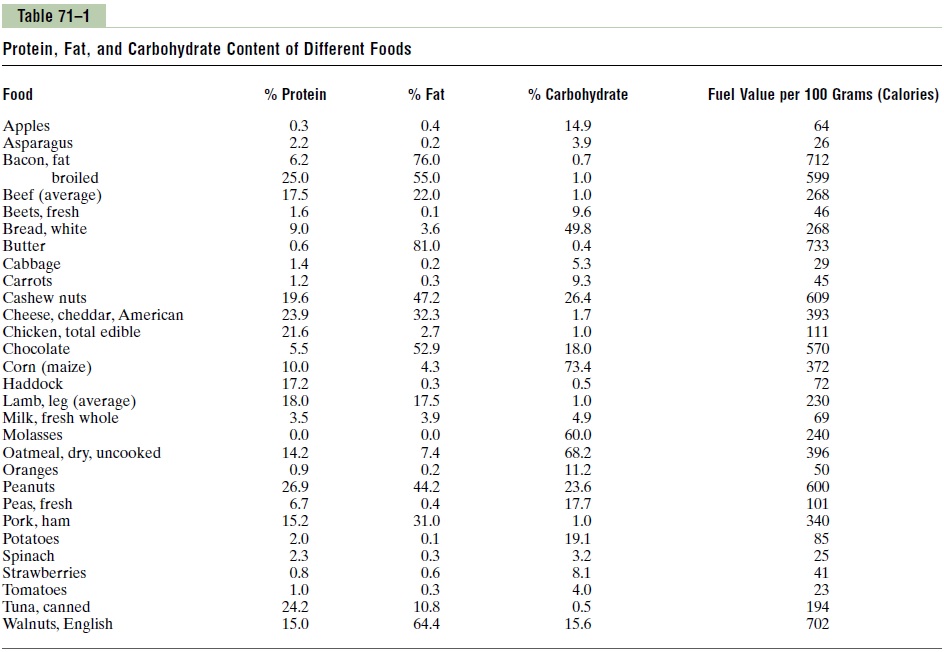 Twenty to 30 grams of the body proteins are degraded and used to produce other body chemicals daily. There-fore, all cells must continue to form new proteins to take the place of those that are being destroyed, and a supply of protein is needed in the diet for this purpose. An average person can maintain normal stores of protein, provided the daily intake is above 30 to 50 grams.

Some proteins have inadequate quantities of certain essential amino acids and therefore cannot be used to replace the degraded proteins. Such proteins are called partial proteins, and when they are present in largequantities in the diet, the daily protein requirement is much greater than normal. In general, proteins derived from animal foodstuffs are more complete than are pro-teins derived from vegetable and grain sources. For example, the protein of corn has almost no tryptophan, one of the essential amino acids. Therefore, individuals in economically disadvantaged countries who consume cornmeal as the principal source of protein sometimes develop the protein-deficiency syndrome called kwashi-orkor, which consists of failure to grow, lethargy,depressed mentality, and edema caused by low plasma protein concentration.