When a humoral immunodeficiency is suspected, it is usual to start with the simplest pro-cedures and to proceed to more sensitive and complex tests as needed.

When a humoral immunodeficiency is suspected, it is usual to start with the simplest pro-cedures and to proceed to more sensitive and complex tests as needed.

A. Quantitative Assay of Immunoglobulins and Antibodies

This is the most frequently performed screening test for humoral immunity. Usually it is sufficient to assay the three major immunoglobulin classes (IgG, IgA, and IgM) since there is no proof that deficiencies of IgD or IgE might have any pathological consequences. However, in interpreting immunoglobulin levels in children, it is very important to re-member that normal values vary with age, as shown in Table 28.3. 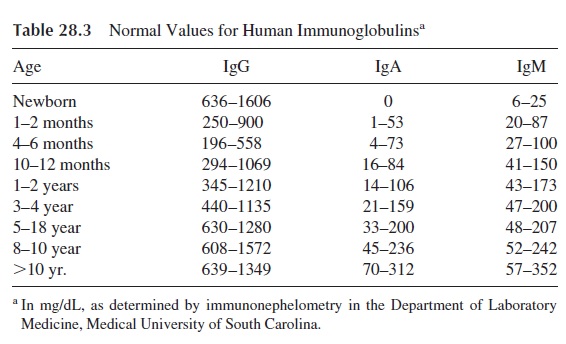 IgG subclasses can also be quantitated, and the results of the assay may reveal sub-class deficiencies. Total IgG concentration might be normal to slightly depressed, and one or two of the minor subclasses may be deficient. Particular attention has been given to IgG2 subclass deficiency, which may be associated to infections with bacteria with polysaccha-ride capsules.

Not infrequently the assay of serum immunoglobulins may fail to support a clinical diag-nosis of humoral immunodeficiency. The next step may be the assay of antibodies that are found in most normal individuals, either as a result of normal exposure to the antigen or as a result of vaccination:

Abnormally low levels of one or more of these antibodies will support a diagnosis of humoral immunodeficiency, providing that exposure to the corresponding antigens can be unquestionably documented. The determination of preformed antibodies to common or-ganisms and agents used in routine immunizations is mainly indicative of past immunore-activity and may not provide useful information in cases where the deficiency is more sub-tle or when the immunodeficiency is of recent onset, when the first function to be lost is the ability to mount a primary immune response.

3. Determination of Antibodies Against Infectious Agents Known to Infect the Patient

The need to identify the etiological agents in patients with recurrent and unusual infections cannot be overstressed. Besides providing very useful treatment for the selection of the most adequate antimicrobial(s), it allows one to carry out the most informative test for the diagnosis of a humoral immunodeficiency, i.e., the assay of antibodies against the infec-tious agent. If the patient fails to produce antibodies, the diagnosis is obvious.

In some patients, all investigations might be inconclusive except for the measurement of antibodies to the infecting microorganism(s), which might reveal an “antigen-selective” immunodeficiency. Unfortunately, proper microbiological studies are seldom done in pa-tients with suspected humoral immunodeficiency, and adequate assays for antibodies to some common organisms (e.g., staphylococci) are not commonly available.

4. Quantitation of Antibodies After Antigenic Challenge

This is the ideal approach to the investigation of the humoral immune response, since it de-termines very specifically the ability of the patient to sustain a functional antibody response after adequate challenge. This type of investigation can be carried out with two different perspectives:

2.            To determine whether a patient can synthesize antibodies against a specific, in-fecting microorganism

The antigens chosen for this investigation should meet the following criteria: lack of risk for the patient; availability of techniques for the measurement of the corresponding an-tibodies; and adequacy of the antigen for the purpose in mind. For evaluation of primary immune responsiveness, for example, one needs to use an antigen to which the individual has never been exposed. In immunodeficient children for whom good records of previous immunizations and infections are available, any component or killed vaccine (never live at-tenuated) to which there has been no previous exposure can be used. That may not be pos-sible if the child has been fully immunized. In that case, and in the case of most adults, pro-teins extracted from lower animals, such as keyhole limpet hemocyanin or bacteriophage, are the best alternatives.

Immunization with bacteriophage has been used extensively by some groups. Both the evolution of antibody levels (Fig. 28.2) and the clearance of the injected phage (sig-nificantly delayed in immunodeficiency patients) can be followed with very sensitive techniques to determine if antibodies are synthesized and whether or not there is an ef-fective immune elimination of the bacteriophage. Phage immunization has been carried out by several groups in different countries and has been proven to be a harmless proce-dure. At this point, the main problem preventing the widespread use of this approach is the need for development of phage-inactivation assays for the measurement of the an-tiphage antibody response, which is beyond the capabilities of many clinical diagnostic laboratories. 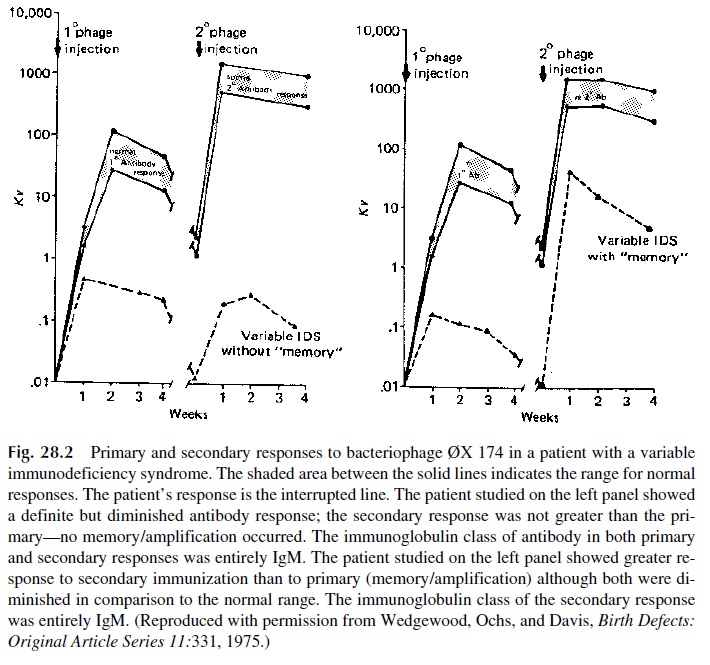 The evaluation of the secondary immune response does not raise as many problems, but it is less informative, since the capacity to initiate a primary immune response seems to be the first (and sometimes the only) function affected by immunosuppressive agents or in diseases associated with immunosuppression. Diphtheria and tetanus toxoids are frequently used to assess the ability to mount a humoral response because these are strongly immuno-genic proteins, their use has only minimal risk for the patient, and specific antibodies can be assayed by a variety of techniques, such as enzyme immunoassay.

Given the lack of information concerning normal values for these antibodies and the fact that the abnormality searched for is the lack of an active response rather than a low level of antibody, the best approach is to collect blood for baseline study prior to a booster with the corresponding antigen and repeat the study with a sample collected 2–3 weeks later.

Following this protocol, we detected active responses in all but two of a group of chil-dren randomly selected from the population of a rural county of South Carolina (Fig. 28.3). The existence of normal nonresponders needs to be considered when evaluating a patient suspected of having an immunodeficiency. 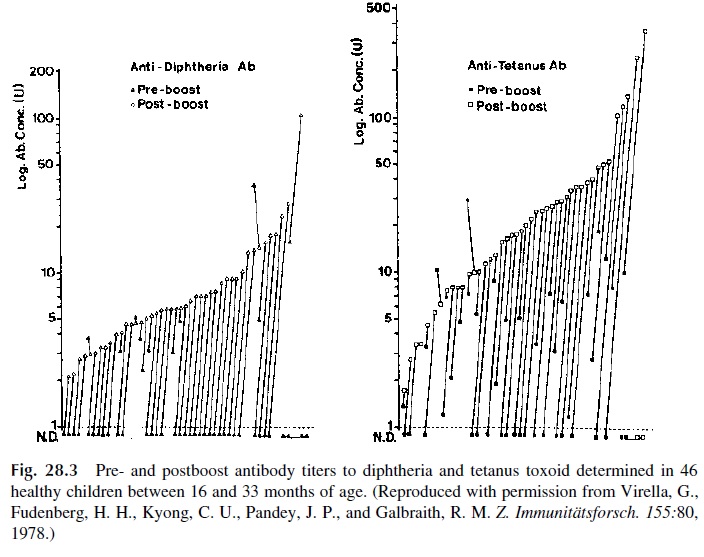 An interesting example of the application of tetanus toxoid immunization is the fol-low-up of the immune response after a bone marrow graft. Patients receiving bone marrow grafts are given large doses of immunosuppressive drugs before the graft, hoping to avoid rejection, and continue to be immunosuppressed after the graft to avoid a graft-versus-host reaction . When the evolution of the patient is uneventful, the immuno-suppressive drugs are stopped, and the patient is then immunized for tetanus toxoid to de-termine whether the immune system regains its ability to mount an active immune re-sponse. As illustrated in Figure 28.4, this recovery may only be observed several months after the suspension of immunosuppressive therapy. It needs to be noted that the im-munoglobulin levels may be normal while the patient shows a complete lack of response to immunization. 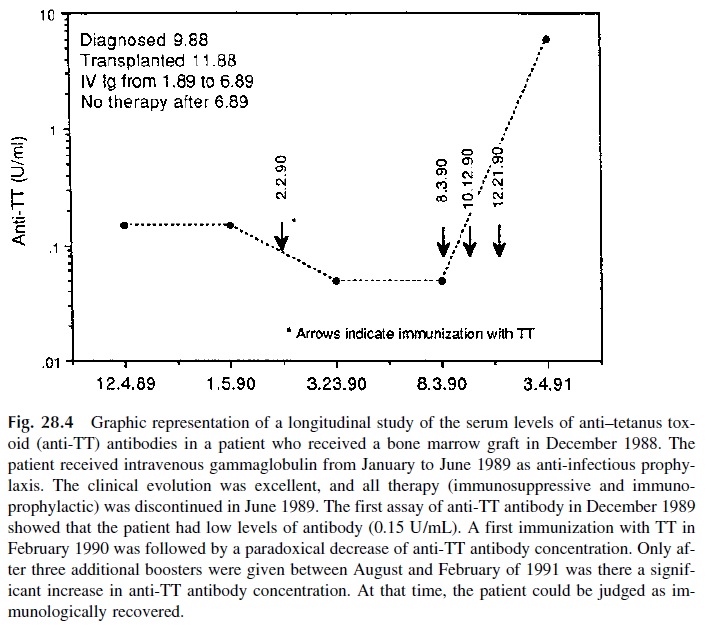 Challenge with polysaccharide vaccines (such as the Haemophilus influenzae or the Streptococcus pneumoniae vaccines) will indicate whether a patient has the ability to de-velop an immune response to T-independent antigens. This is a possibility that needs to be specifically investigated in cases of Wiskott-Aldrich syndrome and of IgG2 subclass defi-ciency, in which patients often show subnormal response to polysaccharides.

B. Analysis of B-Lymphocyte Membrane Markers

The finding of an immunoglobulin deficiency or of the inability to mount a humoral im-mune response does not give many clues as to the pathogenesis of the defect. Besides the possibility of dealing either with a primary or a secondary immunodeficiency, which im-plies the need to investigate known causes of secondary immunodeficiency, primary hu-moral immunodeficiencies may result from a variety of defects, such as absence or lack of differentiation of B cells, defects in intracellular synthesis, assembly, or secretion of im-munoglobulins, hyperactivity of suppressor cells, deficient helper T-cell function, etc.. One important parameter to determine is the distribu-tion of lymphocyte subpopulations.

With the introduction of monoclonal antibodies, the B-cell count is usually deter-mined by calculating the percentage of peripheral blood lymphocytes with specific B-lymphocyte markers (CD19, CD20). The proportion of lymphocytes identifiable as B cells in the peripheral blood by such techniques is between 4 and 10%, corresponding to a range of 96 – 421 CD19+ cells/ µL. If the number of B cells in the peripheral blood is significantly depressed, the immunodeficiency is most likely to result from lack of B-cell differentiation. Such lack of B-cell differentiation is the rule in infantile agammaglobu-linemia .

The first technique to identify and enumerate B lymphocytes was based on the fact that these cells have immunoglobulin (Ig) molecules attached to their mem-branes.

The number of CD4+ helper T lymphocytes in the peripheral blood is also a criti-cal parameter that needs to be determined. Although the correspondence between mem-brane markers and function is not perfect, the enumeration of cells expressing CD4 is be-lieved to be an adequate assessment of the number of helper T cells. Very low numbers of CD4+ lymphocytes are a major hallmark of the acquired immunodeficiency syndrome, in which humoral immunity (particularly the ability to mount a primary immune re-sponse) is severely compromised .

The determination of the number of T cells expressing the CD40 ligand (CD40L, gp39), one of the membrane molecules involved in T-B cell interactions and signaling, is critical for the diagnosis of the hyper-IgM syndrome .

C. Study of Differentiation of B Cells In Vivo

The best approach is to look for germinal centers and immunoglobulin-producing cells in a lymph node biopsy from an area draining the site where an antigenic challenge has been carried out a week earlier (e.g., with diphtheria or tetanus toxoids). The main drawback is the need for surgical excision of a lymph node, which often may be quite difficult to local-ize. An alternative recommended by some groups is to perform a rectal biopsy and look for the presence of germinal centers in the submucosa, as evidence for the normal differentia-tion of B cells in the peri-intestinal tissues.

The investigation of B-cell function in vitro requires separation of peripheral blood lym-phocytes (PBL) and their stimulation with substances known to induce the proliferation and/or differentiation of B lymphocytes. Several substances have been used as B-cell mi-togens, including pokeweed mitogen (PWM), Staphylococcus aureus (SA), and Salmonella paratyphi B (SPB). Of all these mitogens, pokeweed mitogen, a plant lectin thatinduces proliferation and differentiation of T and B lymphocytes, is the most widely used for B-cell stimulation in vitro. The effects of this mitogen on B lymphocytes are T-cell–de-

pendent, but when immunoglobulin synthesis is used as the endpoint, the assay measures PWM-induced functional differentiation of B lymphocytes (Fig. 28.5). 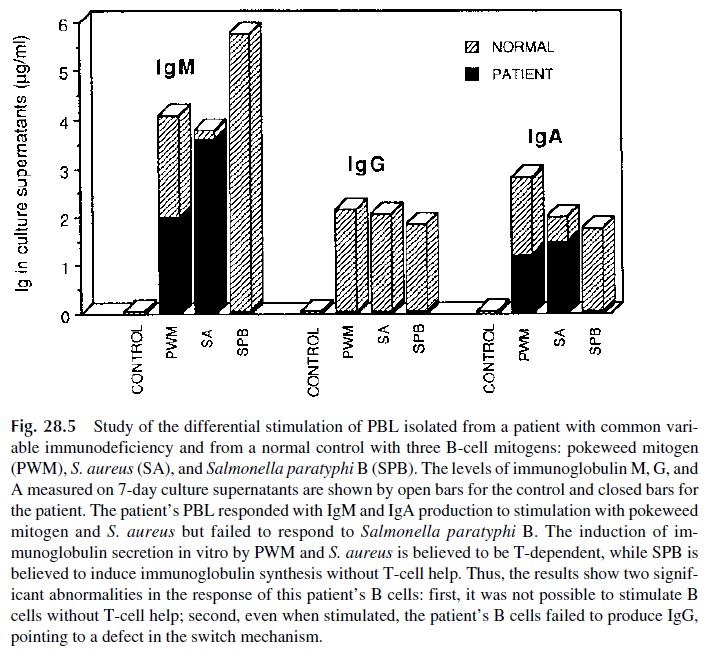