It is traditional to designate as cell-mediated immunity (CMI) the complex network of in-terrelated cellular reactions often resulting in the production and release of soluble factors that appear to mediate the cooperation between different mononuclear cell populations and the expression of a variety of lymphocyte effector functions.

It is traditional to designate as cell-mediated immunity (CMI) the complex network of in-terrelated cellular reactions often resulting in the production and release of soluble factors that appear to mediate the cooperation between different mononuclear cell populations and the expression of a variety of lymphocyte effector functions. A variety of tests, some per-formed in vivo and others in vitro, have been shown to correlate with different parameters or functions believed to depend primarily on lymphocyte stimulation and activation and, in some cases, to reflect the adequacy of immune responses primarily mediated by T lym-phocytes.

A. In Vivo Testing of Delayed-Type Hypersensitivity

Delayed hypersensitivity responses, are primarily mediated by T lymphocytes, and thus can be considered as manifestations of an hyper-stimulation of cell-mediated immunity. Using controlled conditions, it is possible to chal-lenge individuals with antigens known to cause this type of reactions as a way to explore their cell-mediated immunity. The two classical approaches to measure delayed-type hy-persensitivity (DTH) responses in vivo are skin testing and induction of contact sensitivity.

Skin testing, first described by Koch in 1891, is based on eliciting a secondary re-sponse to an antigen to which the patient was previously sensitized. A small amount of soluble antigen is injected intradermally on the extensor surface of the forearm.

The antigens used are usually microbial in origin [e.g., purified protein derivative (PPD) of tuberculin, tetanus toxoid, mumps antigens, and a variety of fungal extracts, including candidin (from Candida albicans), coccidioidin (from Coccidioides immitis), and histoplasmin (from Histoplasma capsulatum)].

The area of the skin receiving the injection is observed for the appearance of ery-thema and induration, which are measured at 24 and 48 hours. The designation of delayed hypersensitivity is based on comparison with a totally different type of skin reactions that develop a matter of minutes after antigen inoculation, last only for a few hours, and are characterized by erythema and localized swelling, but without induration (immediate hypersensitivity reactions;). A positive skin test is usu-ally considered to be associated with an area of induration greater than 10 mm in diam-eter. If no reaction is observed, the test may be repeated with a higher concentration of antigen. Because the capacity to demonstrate a delayed hypersensitivity reaction may per-sist for long periods of time, a positive skin test may indicate either past exposure or a current infection.

If a patient has no reaction after being tested with a battery of antigens, it is assumed that a state of anergy exists. Anergy can be caused by immunological deficiencies or infections (such as measles or chronic disseminated tuberculosis), but it can also be the re-sult of errors in the technique of skin testing.

Although these tests have the theoretical advantage of testing the function of the T-cell system in vivo, they meet with a variety of problems:

·              The interpretation of negative tests has to be carefully weighed. Negative results af-ter challenge with antigens to which there is no record of previous exposure can always be questioned, while a negative result with an antigen extracted from a microbial agent that has been documented as causing disease in the patient has a much stronger diagnostic significance, implying a functional defect in cell-mediated immunity.

B. Analysis of T-Lymphocyte Membrane Markers

The availability of monoclonal antibodies specific for a wide variety of lymphocyte membrane molecules and the development of flow cytometry–based assays has resulted in the possibility of enumerating T lymphocytes, and their subpopulations using fluores-cent-labeled monoclonal antibodies are used to detect the different T-lymphocyte anti-gens. The determination of these parameters is particularly important in the study of pa-tients suspected of having a primary or secondary immunodeficiency affecting the T-lymphocyte system. The normal distribution of lymphocyte subpopulations in a normal adult is shown in Table 28.5. Quantitative abnormalities may range from complete ab-sence or pronounced deficiency of all T cells, as detected with CD3 antibodies, to lack of CD4+ T cells.

Phenotyping of NK cells with monoclonal antibodies  is the most popular parameter to assess this cell subpopulation in a clinical context. However, the pre-cise phenotype associated with a fully activated NK cell has not been established, and the enumeration of the resting NK cell population may not be very informative.

There are limitations to the interpretation of numerical data, given the very loose correla-tion between membrane markers and biological function. However, numerical data are sim-pler and cheaper to obtain than functional data, which usually requires cell isolation and which is obtained in conditions that are anything but physiological .

Human lymphocytes can be stimulated in vitro by specific antigens or by mitogenic sub-stances. Although testing the response to specific antigens should be the preferred approach to the study of lymphocyte function, the likelihood of success in such studies is limited by the fact that very few T cells (and even fewer B cells) in the peripheral blood will carry spe-cific receptors for any antigen, even if the individual has already developed a memory re-sponse to that particular antigen. In contrast, mitogenic responses are easier to elicit, because the mitogenic substances are able to stimulate nonspecifically large numbers of peripheral blood lymphocytes, and therefore lymphocyte proliferation becomes much easier to detect. Some of the most commonly used lymphocyte mitogens are listed in Table 28.6.

Several parameters can be used to determine whether T cells respond adequately to mitogenic stimulation. The simplest one is the measurement of the incorporation of triti-ated thymidine into the mitogen-stimulated lymphocytes. In the stage of blastogenic trans-formation there is active DNA synthesis, and if tritiated thymidine [3H-Tdr] is added to the culture at the peak of proliferation (usually after 72 hours of incubation with the mitogen), significant incorporation of 3H-Tdr will be measured. For this to be a true indication of T-lymphocyte response, it is essential to use mitogens that stimulate exclusively T cells, such as phytohemagglutinin (PHA), concanavalin A (ConA), and Immobilized anti-CD3 mono-clonal antibodies. PWM stimulates both B cells and T cells and, therefore, cannot be used to differentiate the mitogenic response of B and T lymphocytes, if 3H-Tdr incorporation is used as the endpoint.

The study of the response of lymphocytes to antigenic stimulation in vitro is functionally more relevant than the study of mitogenic responses. However, even in the best possible circumstances, i.e., when the antigen can be recognized by T lymphocytes, which predom-inate in peripheral blood, and the lymphocyte donor has developed memory to the antigen in question, the proportion of cells responding to stimulation is likely not to exceed 0.1%, and the proportion of responding B lymphocytes is even lower.

The probability of obtaining a measurable response can be increased if the lympho-cytes are stimulated with antigens to which the lymphocyte donor has been previously ex-posed and the cultures are incubated with the antigen for 5–7 days prior to addition of 3H-Tdr.

The elicitation of B-lymphocyte responses in vitro is considerably more difficult. Most studies in which positive results have been reported have used heterologous red cells or tetanus toxoids as antigens. The in vitro response to tetanus toxoid is easier to elicit us-ing peripheral blood mononuclear cells separated from donors who had received a booster 1–3 weeks earlier. Usually the incubation periods in studies of B-cell activation have to be increased even further, up to 9–11 days.

Since one of the most biologically significant consequences of T-lymphocyte activation is the release of cytokines, it is not surprising that immunologists have use cytokine mea-surements as indices of T-cell activation. This is usually achieved using enzymoim-munoassays that incorporate monoclonal antibodies to specific cytokines or their receptors.

1. IL-2 and IL-2 receptor (CD25) assay. The assay of IL-2 by EIA is probably the method of choice for the evaluation of the functional response of helper T cells. Secreted IL-2 can be detected 24 hours after mitogenic stimulation. Low or ab-sent release of IL-2 has been observed in a variety of immunodeficiency states, particularly in patients with AIDS. It is also a good parameter to follow longitu-dinally when the effects of a drug or substance over the immune system are be-ing studied, as illustrated in Figure 28.6. CD25 expression, on the other hand, is a characteristic shared by activated T and B cells. It can be used to identify acti-vated B cells or T cells when the simultaneous expression of CD25 and specific T- or B-cell markers are determined. 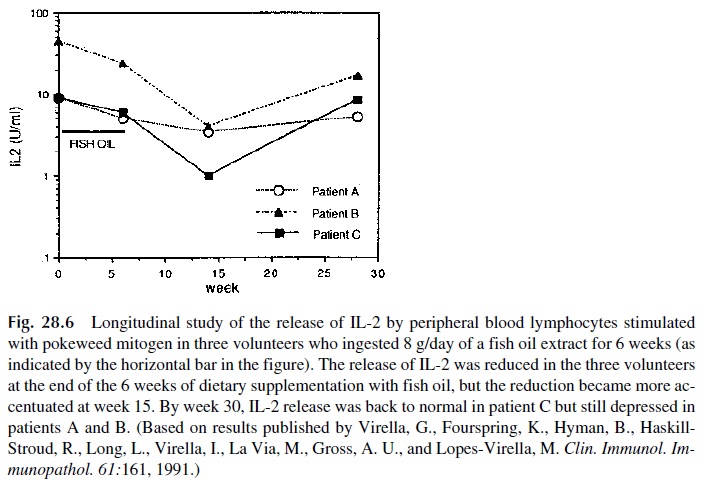 2. Enzymoimmunoassays for IL-4, IL-5, IL-6, IL-10, IL-12, GM-CSF, TNF, LT-α and interferon-γ  are also available, and their judicious use allows to obtain a more complete picture of the functional response of T lymphocytes. For exam-ple, predominant release of IL-4, IL-5, and IL-10 is characteristic of TH 2 re-sponses, while predominant release of GM-CSF and interferon-γ is characteris-tic of TH1 responses.