Diabetes mellitus is a chronic metabolic disorder. In Greek (Diabetes – running through; mellitus- sweet). It is characterised by increased blood glucose level due to insufficient, deficient or failure of insulin secretion.

Diabetes mellitus is a chronic metabolic disorder. In Greek (Diabetes – running through; mellitus- sweet). It is characterised by increased blood glucose level due to insufficient, deficient or failure of insulin secretion. This is the most common pancreatic endocrine disorder. The incidence of Type- 1 and Type-2 diabetes is increasing worldwide.

IDDM accounts for 10 to 20% of the known diabetics. The condition also occurs in children ( juvenile onset diabetes) and young adults, the onset is usually sudden and can be life threatening. This is caused by the destruction of β -cells of the pancreas. It is characterized by abnormally elevated blood glucose levels (hyperglycemia ) resulting from inadequate insulin secretion.

Causes : Genetic inheritance and environmental factors (infections due to virus, acute stress) are the cause for this condition. 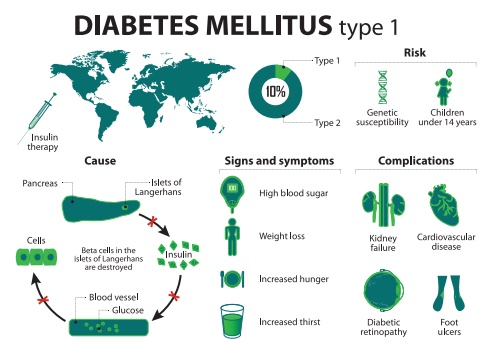 This is also called as adult onset diabetes and accounting for 80 to 90% of the diabetic population. It develops slowly, usually milder and more stable. Insulin production by the pancreas is normal but its action is impaired. The target cells do not respond to insulin. It does not allow the movement of glucose into cells.

Symptoms: Diabetes mellitus is associated with several metabolic alterations.The most important symptoms are

3. Prevention and Control of Diabetes

Diet, hypoglycemic drugs, insulin injection and exercise are the management options based on the type and severity of the condition. The overall goal of diabetes management is to maintain normal blood glucose level.

Physical activity: Exercise plays an important role in facilitating a good control of diabetes, in addition to strengthening and toning up the muscles.

Education and Awareness: People with diabetics should be educated on the nature of disease they have and the possibility of complications of the disease, if blood sugar is not kept under control. Instructions regarding diet, exercise and drugs should be explained.